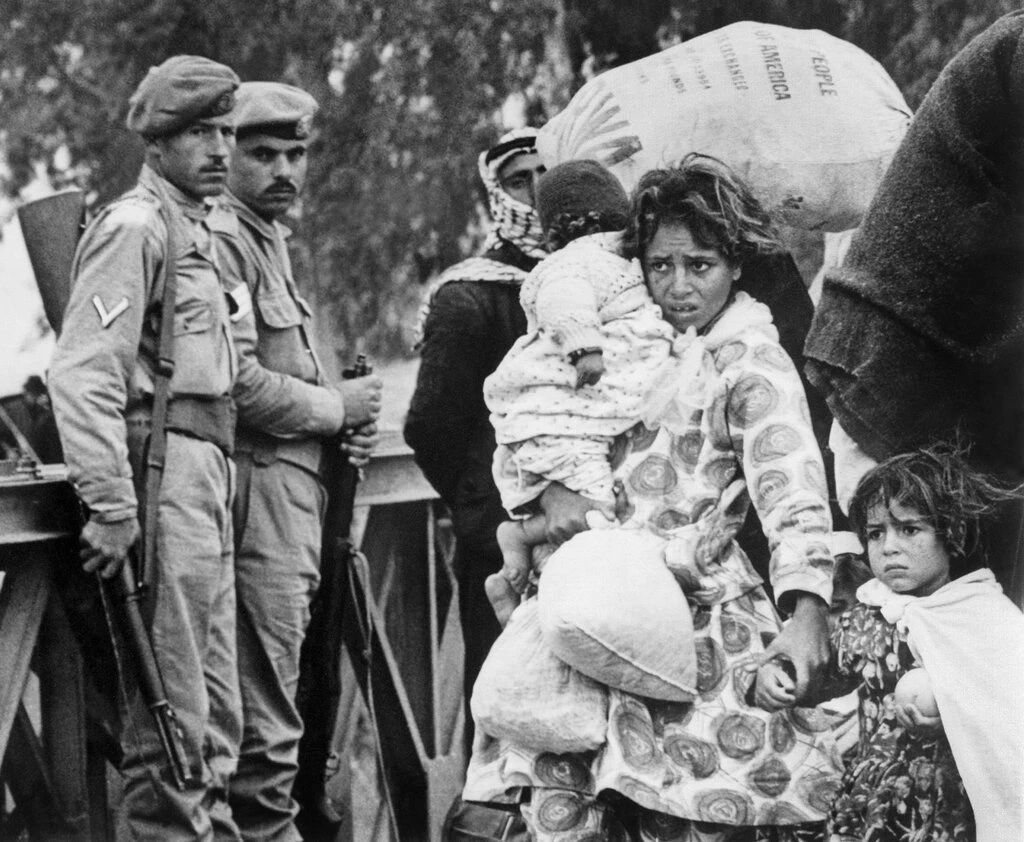 12 May 2021 – Why has the impending eviction of six Palestinian families in East Jerusalem drawn Israelis and Palestinians into a conflict that appears to be spiraling toward yet another war? Because of a word that in the American Jewish community remains largely taboo: the Nakba.

Among Palestinians, Nakba is a household word. But for Jews — even many liberal Jews in Israel, America and around the world — the Nakba is hard to discuss because it is inextricably bound up with Israel’s creation. Without the mass expulsion of Palestinians in 1948, Zionist leaders would have had neither the land nor the large Jewish majority necessary to create a viable Jewish state. As I discuss at greater length in an essay for Jewish Currents from which this guest essay is adapted, acknowledging and beginning to remedy that expulsion — by allowing Palestinian refugees to return — requires imagining a different kind of country, where Palestinians are considered equal citizens, not a demographic threat.

To avoid this reckoning, the Israeli government and its American Jewish allies insist that Palestinian refugees abandon hope of returning to their homeland. This demand is drenched in irony, because no people in human history have clung as stubbornly to the dream of return as have Jews. Establishment Jewish leaders denounce the fact that Palestinians pass down their identity as refugees to their children and grandchildren. But Jews have passed down our identity as refugees for 2,000 years. In our holidays and liturgy we continually mourn our expulsion and express our yearning for return. “After being forcibly exiled from their land,” proclaims Israel’s Declaration of Independence, “the people kept faith with it throughout their Dispersion.” If keeping faith that exile can be overcome is sacred to Jews, how can we condemn Palestinians for doing the same thing?

In addition to telling Palestinians they cannot go home because they have been away too long, Jewish leaders argue that return is impractical. But this too is deeply ironic because, as a refugee rights advocate, Lubnah Shomali, has pointed out, “If any state is an expert in receiving masses and masses of people and settling them in a very small territory, it’s Israel.” At the height of the Soviet exodus in the early 1990s, Israel took in about 500,000 immigrants. If millions of diaspora Jews began moving to Israel tomorrow, Jewish leaders would not say taking them in was logistically impossible. They would help Israel to do what it has done before: build large amounts of housing fast.

When most Jews imagine Palestinian refugees’ return, they probably don’t envision it looking like Israel’s absorption of Soviet Jews. More likely, they predict Palestinians expelling Jews from their homes. But the tragic reality is that not many Jews live in former Palestinian homes, since it is believed that only a few thousand remain intact. Ms. Shomali estimates that more than 70 percent of Palestinian villages that were destroyed in 1948 remain vacant. And the Palestinian activists and scholars who envision return generally argue that large-scale eviction is neither necessary, nor desirable. Asked in 2000 about Jews living in formerly Palestinian homes, the famed Palestinian literary critic Edward Said declared that he was “averse to the notion of people leaving their homes” and that “some humane and moderate solution should be found where the claims of the present and the claims of the past are addressed.”

None of this means refugee return would be simple or uncontested. Efforts at historical justice rarely are. But there is a reason the writer Ta-Nehisi Coates ends his famous essay on reparations for segregation and slavery with the subprime mortgage crisis that forced many Black Americans into foreclosure in the first decade of the 21st century. The crimes of the past, when left unaddressed, do not remain in the past. That’s also the lesson of the evictions that have set Israel-Palestine aflame. More than seven decades ago, Palestinians were expelled to create a Jewish state. Now they are being expelled to make Jerusalem a Jewish city. By refusing to face the Nakba of 1948, the Israeli government and its American Jewish allies ensure that the Nakba continues.

Perhaps American Jewish leaders fear that facing the crimes committed at Israel’s birth will leave Jews vulnerable. Once the Nakba taboo is lifted, Palestinians will feel emboldened to seek revenge. But more often than not, honestly confronting the past has the opposite effect.

After George Bisharat, a Palestinian-American law professor, wrote about the house in Jerusalem that his grandfather had built and been robbed of, a former Israeli soldier who had lived in it contacted him unexpectedly. “I am sorry, I was blind. What we did was wrong, but I participated in it and I cannot deny it,” the former soldier said when they met, and then added, “I owe your family three months’ rent.” Mr. Bisharat later wrote that he was inspired to match the Israeli’s humanity.

“Just that response, writ large, is what awaits Israel if it could bring itself to apologize to the Palestinians,” he wrote. In that moment he saw “an untapped reservoir of Palestinian magnanimity and good will that could transform the relations between the two peoples.”

There is a Hebrew word for the behavior of that former soldier: “teshuvah.” It is generally translated as “repentance.” Ironically enough, however, its literal definition is “return.” In Jewish tradition, return need not be physical; it can also be ethical and spiritual. That means the return of Palestinian refugees — far from necessitating Jewish exile — could be a kind of return for us as well, a return to traditions of memory and justice that the Nakba has evicted from organized Jewish life.

“The occupier and myself — both of us suffer from exile,” the Palestinian poet Mahmoud Darwish once declared. “He is an exile in me and I am the victim of his exile.” The longer Jews deny the Nakba, the deeper our moral exile becomes. By facing it squarely and beginning a process of repair, both Jews and Palestinians, in different ways, can start to come home.

Peter Beinart (@PeterBeinart) is professor of journalism and political science at the Newmark School of Journalism at the City University of New York. He writes The Beinart Notebook, a weekly newsletter, and is editor at large of Jewish Currents, where a version of this essay appeared.

A version of this article appears in print on May 13, 2021, Section A, Page 23 of the New York edition with the headline: Palestinians Deserve to Return, Too.