The Plight of Refugees and Asylum Seekers in Australia

“It’s from the frying pan of wars and genocide at home, into the flaming fire of an off-shore refugee-prison complex in Australia”. FORSEA hosted a virtual in-depth discussion on how a democratic state such as Australia has adopted and institutionalized an anti-refugee policy since around 2001. 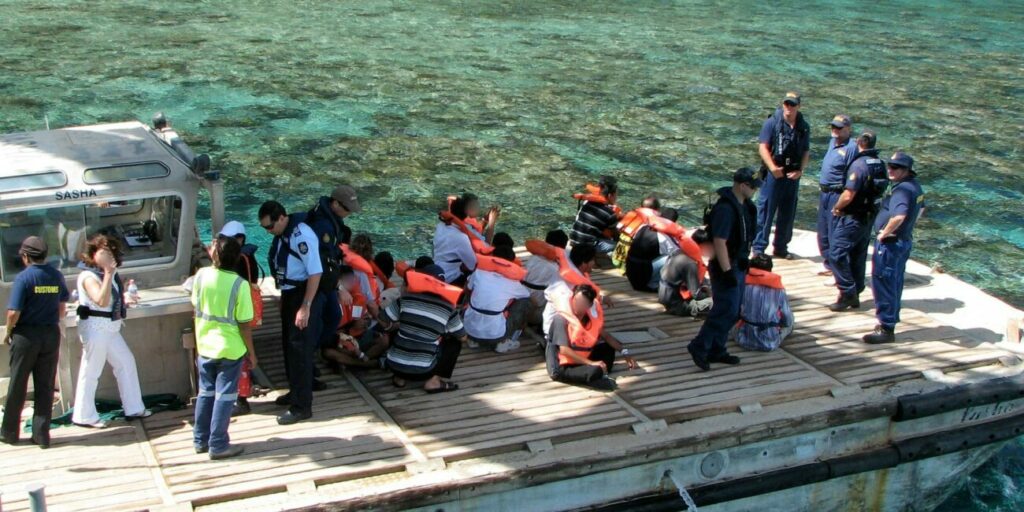 30 Apr 2021 – Both Labour and Liberal governments in Canberra have, with a short interregnum of PM Kevin Rudd’s government, pursued progressively war-like policies towards what the Australia media and politicians dehumanizingly call “the boat people”, or the “un-authorized maritime arrivals”.

These terms reek Australia’s white racist connotations as virtually all “unauthorized maritime arrivals”, as refuge-seekers in the waters and shores of Australia are brown and black peoples fleeing wars, ethnic persecution, genocide and terrorism in Africa, Myanmar, the Middle East and so on.

As a matter of fact, Tony Abbot, ex-Prime Minister of Australia, and now Special Trade Adviser to Britain’s Brexit Tory Government of Boris Johnson, brazenly declared “war” on refuge-seekers around 2013, having mobilized Australian Navy against this most vulnerable population, who knocked on Australia’s door, half-starved, traumatized and in desperate need of humanitarian support. 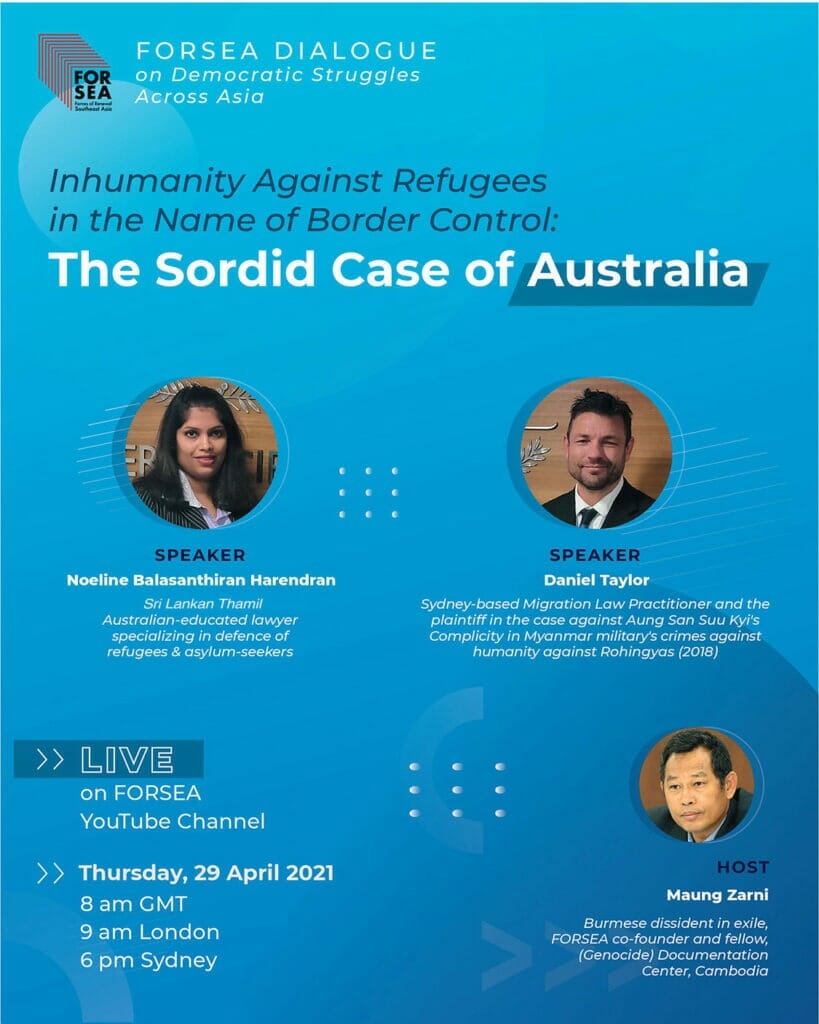 Against this backdrop, Canberra had pioneered a system of offshore processing refuge-seekers in cash-strapped South Pacific island countries such as Papua New Guinea (PNG) and Nauru, with the help of private global security companies such as G4S and homegrown Aussie companies (for instance, CANSTRUCT).

FORSEA’s guests Daniel Taylor and Noeline Balasanthian Harendren, the two Australian legal practitioners from the Sydney West Legal firm are dedicated refugee rights lawyers who fight Australia’s inhuman policies and practices whereby people who have fled genocide and torture are once again dehumanized, demonized, criminalized and locked up for no probable cause. (This revictimization is carried out by the democratic state of Australia which speaks out on human rights issues at the United Nations Human Rights Council.)

The two lawyers were joined by Ahmad Hakim, former Iranian Kurdish refugee who now runs a refugee rights campaign group out of Melbourne and Imran, a former Rohingya refugee who was transported to the infamous Manus Island “processing detention centre” where he was locked up for 5 years, despite his refugee status in Australia as recognized by the United Nations High Commission for Refugees (UNHCR).

Imran shared his first-hand horrific story of having been forced to live with 50 other men in one packed room without a shred of privacy for 5 years. He showed pictures of what in effect was a sub-human degraded existence in the Australian-run refugee detention centre.

Hakim relayed a verified account of a Kurdish detainee who had been severely attacked during detention at “the processing centre” in PNG: private security guards from the Australian prison-complex used zinc wire to cut the throat of Mohammad – not his real name – and coerced a horrified secretarial staff to fix the eyewitness account for the criminal act: the detainee had attempted to escape the refugee detention centre by climbing on the barb-wire fence, and by accident injured himself. Hakim showed the pictures of the victim – still in Australian captivity – with fresh wounds around his neck, front and back.

Based on the testimonies she gathered from her detainee clients – some of whom are able to speak to her virtually from their detention – Noeline painted a horrendous picture of how women, children and men are typically subjected to numerous acts of what could only be called barbarism – sodomy, rape, torture, violence, and so on. Female detainees are watched on CCTV round the clock, be they on the toilet or in the shower or in bed. Some rape victims attempted suicide resorting to all kinds of creative self-harm, including burning oneself.

Daniel Taylor talked of how inhuman and criminal – “Fascist totalitarian”, in his word – Australian state has been towards asylum-seekers and refugees and went on to explain the lucrative nature of asylum processing centres – for all those who are involved – host-partner regimes in PNG and Nauru, private companies and locals. As a matter of fact, these pioneering offshore prison-complexes are also a multi-billion-dollar business for those involved in hosting and/or managing them. The Brisbane-based corporation CANSTRUCT was paid $1.5 billion for a 5-year prison management complex with additional several hundred million, according to an investigative report by the Guardian.

Hakim and Imran explained that Australian authorities have misinformed the local populations of PNG and Nauru that several thousand detainees in their local facilities are “terrorists”. Because many are from war-torn Muslim Middle East, the Australian narrative about the detainees resonates with the widespread Islamophobia among the locals who work in these refugee processing detention centres as security guard, low level staff, and so on. Some white Australian off-shore prison staff have been spotted in Far Right rallies in Australia, according to the refugee rights campaigner Hakim.

The former refugee-cum-refugee-rights advocate Hakim observed that talking and active tough on brown and black refugees and/or asylum-seekers has been a great election winner for white Australian politicians. For such racist tough-talk has a lot of buy-ins with the largely Islamophobic Australian public who are also ill- or mal-informed about the vulnerability, rights and needs of refugees who have fled large scale misery at home. Painfully, these refugees have only jumped from the frying pan into the flaming fire of anti-refugee Australia.