Tokyo Doctors Call for Olympics to Be Cancelled over COVID Surge

Doctors group says hospitals in Tokyo are already overwhelmed and ‘have almost no spare capacity’. 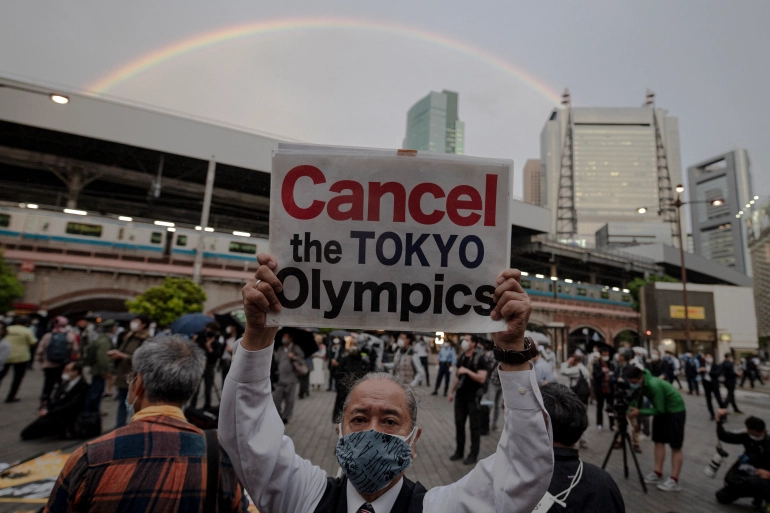 People take part in a protest against the hosting of the 2020 Tokyo Olympic Games in Tokyo on May 17, 2021 [Charly Triballeau/ AFP]

18 May 2021 – A top medical organisation in Japan has thrown its weight behind calls to cancel the Tokyo Olympics, saying hospitals are already overwhelmed as the country battles a spike in coronavirus infections less than three months from the start of the Summer Games.

In an open letter to Prime Minister Yoshihide Suga, dated May 14 and posted online on Monday, the Tokyo Medical Practitioners Association said hospitals in the host city “have their hands full and have almost no spare capacity”.

“We strongly request that the authorities convince the International Olympic Committee (IOC) that holding the Olympics is difficult and obtain its decision to cancel the Games,” the letter said.

The association, which represents about 6,000 primary care doctors, made the appeal amid a jump in infections that has resulted in a shortage of hospital beds in some parts of the Japanese capital and stoked alarm across the country.

Suga on Friday extended a third state of emergency in Tokyo and several other prefectures until May 31.

But the prime minister said that holding a “safe and secure” Olympic games was possible if tight preventive measures were implemented, including actions that would keep ordinary Japanese from coming into contact with those arriving in connection with the Games.

A majority of the Japanese public, however, oppose hosting the Olympics this year.

A weekend poll by the Asahi Shimbun daily found that 43 percent of people surveyed want the Games cancelled, while 40 percent want a further postponement.

Those figures are up from the 35 percent who backed cancellation in a survey by the paper a month ago and the 34 percent who wanted a further delay.

Meanwhile, an online petition with more than 350,000 signatures calling for the Tokyo Games to be cancelled was also submitted Friday to local organizers, the IOC and others.

The Tokyo Medical Practitioner’s Association, in its letter, said medical institutions dealing with COVID-19 would soon face the added difficulty of dealing with heat exhaustion in patients during the summer months.

And if the Olympics contributed to a rise in deaths, it said, “Japan will bear the maximum responsibility.”

Other health experts and medical groups have voiced their concerns over the Olympics, with Kyoto University professor Hiroshi Nishiura – an adviser to the government’s pandemic response – urging authorities in April to postpone the Olympics for a further year to allow more time to vaccinate the public.

Overall, Japan has avoided an explosive spread of the virus experienced by other nations, with 11,500 deaths recorded since the pandemic began.

But the government has come under sharp criticism for its sluggish vaccination rollout. So far, only about 3.5 percent of its population of about 126 million have received at least one vaccine shot.

Underscoring the challenges with the vaccinations, booking systems for mass inoculation sites being launched in Tokyo and Osaka – which started accepting bookings on Monday – were marred by technical glitches.