What more can be said of war
That has not already been committed to screen,
In iconic movies with legendary actors,
Fighting and dying in glory amidst waving flags,
Or in heralded documentaries, carefully
Edited with photos, letters, poignant words
Of lament spoken, amid haunting tunes?

What more can be said of war
That has not already been sculpted in marble,
Painted on canvases,
Photographed in black and white,
And vivid color,
Revealing blood is red, bone is white,
Death is endless.

What more can be said of war
That has not already been inscribed in minds and bodies
Of soldiers who survived,
Civilians who endured,
Prisoners captive to trauma,
Scars visible and invisible?

What more can be said of war
That has not already been carved
On ordered granite gravestones,
In national cemeteries, honoring sacrifice,
Their death veiled in shade and sunlight?

What more can be said of war
That has not already been said about heroes and villains,
Soldiers and generals,
Warriors and misfits,
Freedom fighters and terrorists,
Victims and collateral damage,
Apologies and reparations?

What more can be said of war,
That has not already been said about
Glorious and evil causes,
Lusts for power and control,
Access to wealth and resources,
Messianic responsibilities, moral duties,
Domination . . . ascendancy . . .   Revenge?

What more can be said of war
That has not already been eulogized
On fields of battle,
Where lives were lost, minds seared,
And historians’ crafts polished
With the biased narratives of victors:
Waterloo, Hue, Fallujah?
There is no winner in war!

And why, if so much has been
Spoken, written, and engraved,
Why do the lessons of war,
Continue to be ignored, denied, distorted?
And now  . . .  Syria? 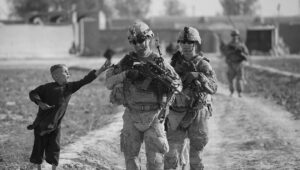 I wrote this poem in the course of two days [August 28-29, 2013] as I witnessed the tragedy of death and suffering in Syria, bewildered again and again, by the endless uses of so many death technologies. I was dismayed by a score of nations pursuing selfish interests, engaging in ethnic and tribal cleansing and genocide. We are living with endless war. Nothing more can be said about war. Violence begets violence,  war  begets  war! No cries of noble responsibilities to protect and defend from either side are sufficient or warranted. They are merely part of the tactics, strategies, and policies sustaining war. Who benefits from war?

This poem is also included in two of volumes I have published:

Anthony J. Marsella, Ph.D., a  member of the TRANSCEND Network, is a past president of Psychologists for Social Responsibility, emeritus professor of psychology at the University of Hawaii, and past director of the World Health Organization Psychiatric Research Center in Honolulu. He is known nationally and internationally as a pioneer figure in the study of culture and psychopathology who challenged the ethnocentrism and racial biases of many assumptions, theories, and practices in psychology and psychiatry. In more recent years, he has been writing and lecturing on peace and social justice. He has published 15 edited books, and more than 250 articles, chapters, book reviews, and popular pieces. He can be reached at marsella@hawaii.edu.

This article originally appeared on Transcend Media Service (TMS) on 31 May 2021.

Anticopyright: Editorials and articles originated on TMS may be freely reprinted, disseminated, translated and used as background material, provided an acknowledgement and link to the source, TMS: WAR, is included. Thank you.