6 May 2021 – A Dutch couple moved into Europe’s first 3D-printed house, UK windfarms broke records, and music was mooted as a treatment for Alzheimer’s, plus the week’s other positive news. 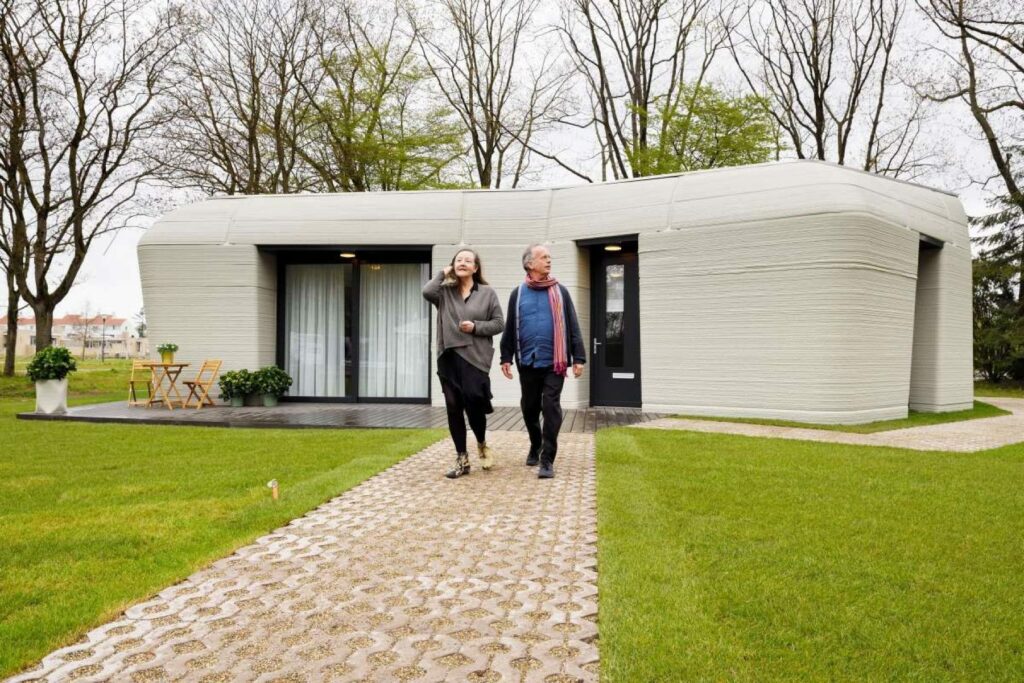 A couple moved in to Europe’s first printed house

A retired Dutch couple have become Europe’s first inhabitants of a 3D-printed house. Elize Lutz and Harrie Dekkers (main picture above) moved into the boulder-shaped bungalow in Eindhoven at the weekend. They are renting the two-bedroom place for €800 (£695) per month.

A far cry from the winsome, wonky townhouses synonymous with the Netherlands, the squat structure is the world’s first habitable 3D-printed property with load-bearing walls.

Proponents of the technology say it could slash building costs, making properties more affordable, as well as reducing the amount of cement used in construction. Cement is responsible for an estimated 8 per of the world’s CO2 emissions.

Prof Theo Salet from Eindhoven University of Technology said the home, one of five planned by the construction firm Saint-Gobain Weber Beamix, was a “major step” toward scaling up 3D printing technology. “Digitisation from design to implementation leads to sustainable and affordable homes, tailor-made to the wishes of the resident,” he added.

Chefs at some of London’s leading Asian restaurants have contributed to a new cookbook that aims to use food to tackle racism. The digital book is a response to research that revealed an increase in anti-Asian hate crimes since the outbreak of coronavirus, which is believed to have originated in China.

Recipes Against Racism brings together dishes from lauded establishments such as Chinese Laundry, Farang and Kiln. All profits from the book go towards the charities Stop Hate UK and End the Virus of Racism.

Londoners Claire Sachiko Fourel and Lex Shu Chan (pictured) came up with the idea. “We were horrified by the growing anti-Asian race crimes during the pandemic and wanted to help drive awareness and change,” they said. “Activism can come in many forms, and food can be a vehicle to challenge ‘othering’ stereotypes and celebrate multi-ethnic and multicultural identities and heritage.”

True to form, the bank holiday weekend was a washout for much of Britain, scuppering many people’s plans to spend it in beer gardens. On the flipside the blustery weather helped the country’s windfarms set new records.

The milestone was reached on Monday afternoon, when wind turbines generated a record 17.6GW of electricity; equivalent to 48.5 per cent of the grid’s total supply. The contribution from gas plants, by contrast, was just 21 per cent.

The new high narrowly overtook the previous record of 17.5GW, set in February, when Storm Darcy supercharged wind turbines. However, it still doesn’t top ‘Great Britain’s greenest day ever’, recorded last month, when solar and wind combined to provide 60 per cent of the country’s energy.

Its tube network is legendary, its bus routes a triumph of town planning – even its cycle superhighways are winning plaudits. Now campaigners are calling on London to embrace the oldest, most egalitarian form of transport available: walking.

As Londoners went to the polls in mayoral elections, the walking charity Ramblers laid out proposals for six walking routes across the capital, including some that follow the capital’s buried waterways. The proposed network, the body argues, would link up green spaces and provide millions of people with a greater incentive to walk. It wants the next mayor to adopt the plans.

Des Garrahan, of Inner London Ramblers, one of the charity’s regional groups, said: “We’ve all been out walking locally a lot more in the last year. But in learning to value and cherish our parks and green spaces we’ve also discovered that London could really do with some routes that help connect them all together.”

A long-distance cycle route was announced for Cornwall

Expect to see more lycra in Cornwall from September – the English county is to get a new 150-mile cycle route at the end of the summer.

Joining the dots between bronze age monuments, old industrial sites and celebrated coastal scenery, the West Kernow Way will begin and end in Penzance, and is designed to be ridden over three to four days.

The route was plotted by the charity Cycling UK, in collaboration with local landowners, and will take riders along bridleways, byways and quiet stretches of country roads.

UK’s Cycling Sophie Gordon touted its potential for reducing congestion in a destination that has boomed in popularity during the pandemic. “The benefit of cycling off-road along the West Kernow Way is that you will steer clear of the crowds, and be able to visit the sites and find the hidden gems of Cornwall, all without filling the lanes with another car.”

Marriage certificates in England and Wales will now include the names of both parents of each half of the couple, rather than just the father’s. Many will likely wonder why it has taken so long.

The change is part of a new digital system designed to simplify and expedite the process by which marriages are registered, helping to tackle a backlog that has built up during the pandemic.

The Home Office said the reform would “correct a historic anomaly”.

An algorithm that ‘prescribes’ music to calm people down has been trialled on Alzheimer’s patients at the Lancashire NHS Trust. The algorithm’s playlist was found to reduced heart rates by up to 22 per cent, helping ease distress among participants.

The trust announced this week that it would extend trials to medical staff.

The algorithm’s playlists are based on listeners’ backgrounds and tastes. The system assesses 36 different qualities including tempo, time signatures and key to determine whether the song is suitably calming. “I was quite stressed at the beginning of it, but I just felt calm afterwards,” one participant told the Guardian.