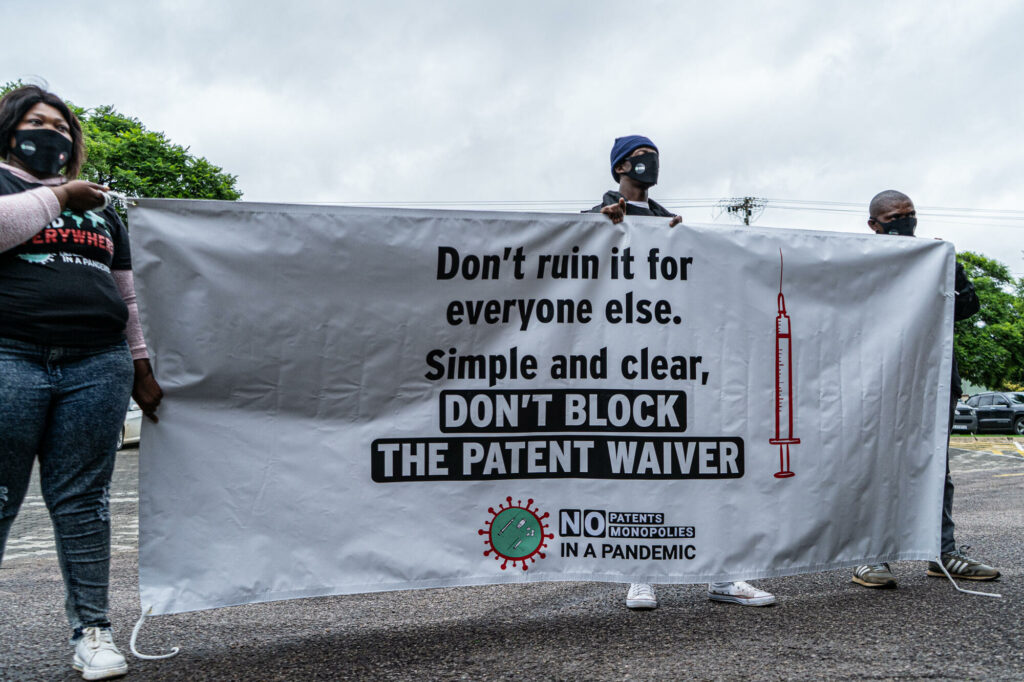 Members of various civil societies gathered outside the embassies of the United States, United Kingdom, and other countries that oppose a patent waiver on COVID-19 vaccines which was proposed to the World Trade Organization by South Africa and India. Tadeu Andre/ MSF – Médecins Sans Frontières – Doctors Without Borders

While President Biden is backing the temporary lifting of COVID-19 vaccine patents, drugmakers are making dire predictions of stifled innovation and eroded public trust. What they really fear is losing profits.

18 May 2021 – Days after he publicly opposed the waiving of patents for lifesaving COVID-19 vaccines, billionaire philanthropist Bill Gates had a change of heart. He released a statement saying, “No barriers should stand in the way of equitable access to vaccines, including intellectual property, which is why we are supportive of a narrow waiver during the pandemic.” His statement came after President Joe Biden, in a surprising move, and in contrast to his European allies, backed a temporary waiver on COVID-19 vaccine patents. U.S. Trade Representative Katherine Tai released a statement saying, “extraordinary circumstances… call for extraordinary measures.” Immediately, the big drugmakers’ share prices fell, and they shot back in anger with a litany of dire predictions.

Gates had been singing a different tune just a few weeks earlier, expressing opposition to vaccine patent waivers when he said in an interview, “The thing that’s holding things back in this case is not intellectual property. There’s not like some idle vaccine factory, with regulatory approval, that makes magically safe vaccines.”

Gates’ initial opposition echoes the pharmaceutical industry’s staunch resistance to waiving the intellectual property rights to COVID-19 vaccine technology. In a letter to the Biden administration, members of an industry group called Pharmaceutical Research and Manufacturers of America (PhRMA) wrote, “Eliminating those protections would undermine the global response to the pandemic, including ongoing effort to tackle new variants, create confusion that could potentially undermine public confidence in vaccine safety, and create a barrier to information sharing.” The signatories added, “Most importantly, eliminating protections would not speed up production.”

Walden Bello, co-founder of the advocacy organization Focus on the Global South and an international adjunct professor at SUNY Binghamton, told me in an interview from Manila, Philippines, that “these arguments are really quite spurious.” Bello had penned an opinion column in the New York Times saying, “A short-term Trips waiver would allow developing nations to quickly ramp up vaccine production and save lives at an affordable cost.”

The demand for vaccine patent waivers originated in October 2020 when the governments of India and South Africa proposed a temporary suspension of the World Trade Organization’s 1995 TRIPS agreement. Now, more than 100 nations support the call. TRIPS stands for the “Trade-Related Aspects of Intellectual Property Rights,” and for years has been a boon to corporations that have manufactured products with the help of public investment and reaped massive profits through the 20-year monopolies that the agreement grants them.

Bello pointed out that even though the U.S.-based vaccine manufacturer Moderna had said it would not enforce its patent on the COVID-19 vaccine, “if others use its patents and its processes, there’s no guarantee. Nobody touches it unless there is an official government waiver. And Moderna knows that, and Pfizer knows that.” Bello’s characterization is not an exaggeration. The United States has been one of the most ardent enforcers of the TRIPS agreement, bringing aggressive cases on behalf of American manufacturers against other governments.

Indeed, Gates, who sees himself as a self-appointed global health leader, has been an ardent supporter of monopolies on vaccine patents. Still, wealthy elites like him know that it is a morally reprehensible position to overtly back profits over public health, and so they have an alternative to sharing know-how: charity. Developing nations need only wait until wealthy countries and corporate boards are done prioritizing themselves before being able to access vaccines and other lifesaving medication and treatments through donations and diplomatic channels.

In his interview with Sky News, Gates said as much. He expressed patronizingly, “some of the rich countries including the U.S. and the UK, even this summer will get to high vaccination levels and that’ll free up so that we’re getting vaccines out to the entire world in late 2021 and through 2022.” In other words, poorer nations must simply wait for the crumbs of the wealthy to fall off their table in order to be fed.

Pharmaceutical companies have also echoed this sentiment, pretending to care about the well-being of billions of people in the Global South and preferring to distribute finished vaccines through COVAX, a World Health Organization initiative. In their letter to President Biden, PhRMA members wrote, “current estimates are that COVID-19 vaccine manufacturers will supply approximately 10 billion doses by the end of 2021, enough to vaccinate the entire current global vaccine eligible population.” Birgitte Markussen, the EU ambassador to the African Union, also said she supports COVAX over a TRIPS waiver. In other words, she and the drugmakers prefer that African nations wait for a handout from wealthier nations rather than be empowered to produce their own lifesaving vaccines. Developing nations know that such offers can easily be revoked or hinged to other conditions.

Western Pharmaceutical companies have also asserted that waiving vaccine patents will strain the supply chain for raw materials. Indeed, in order to mass-produce the new mRNA-based vaccines, raw materials are going to be needed on an unprecedented scale. But if Pfizer and Moderna claim they can produce enough vaccines for the entire world’s population, then clearly there are enough ingredients. What the companies want is a monopoly on the materials, the vaccines, and the resultant profits.

Another spurious argument from billionaires like Gates and pharmaceutical companies against waivers is that sharing vaccine technology will “stifle innovation.” In this neoliberal capitalist worldview, profit-seeking companies are essentially saying they will not strive for excellence unless there is a very large financial carrot dangled in front of them. Only pure market forces, we are led to believe, can spark the best possible innovation in medical technology. Yet it has been massive public spending to the tune of tens of billions of dollars by the governments of the U.S., the EU, Japan, South Korea, and others that fueled the production of COVID-19 vaccines. Similarly, the new mRNA technology on which Pfizer and Moderna based their vaccines was produced through billions of dollars in public investment.

Bello pointed out that a majority of the money that drug manufacturers spend “is going toward marketing, not innovation, and also to executive pay.” He’s right. For example, Pfizer spent nearly twice as much on marketing and sales as it did on research and development in 2019. Pfizer CEO Albert Bourla was rewarded with a $21 million compensation package in 2020—a jump of 17 percent from the year before. Vaccines are a “cash cow” for companies, said Bello. He maintains, “we need to show the real face of these guys. They are robber barons.”

Perhaps the most insulting of all arguments against waivers is the idea that generic vaccines produced in the factories of developing nations could erode public trust in vaccines because of the possibility of counterfeit products or a lowering of quality and standards. “It’s a red herring,” said Bello. He argued that it is deeply condescending “if you say that… Indian or Brazilian manufacturer[s] who have already been through the licensing processes in their own countries will somehow screw up during the manufacturing” of a vaccine. He pointed out that “this is all speculative and it goes against their record where many of these manufacturers have been producing generics for years which are as good [as] if not better than the original brands.”

In 2019, the Serum Institute of India was cited as the world’s “largest producer of affordable vaccines,” combating diseases like measles, rubella, diphtheria, tetanus, H1N1 influenza, polio, and more. To suggest that non-Western vaccine manufacturers would screw up the process of producing COVID-19 vaccines borders on racism.

Furthermore, there have been instances of Western drugmakers making mistakes in manufacturing COVID-19 vaccines, such as the Baltimore-based plant run by Emergent BioSolutions, which has partnered with Johnson & Johnson and AstraZeneca and which contaminated 15 million vaccine doses because of “human error.” Another 62 million doses that were produced at the same plant, were, according to the New York Times, “in jeopardy until it can be determined whether they were also contaminated.” Almost 12,000 doses of Moderna vaccine were thought to be compromised while en route to Michigan in January because the shipping company McKesson stored them at the wrong temperature. Ultimately, the government regulatory processes in place in the U.S. ensured that such screw-ups did not impact the public, and there is no reason to suggest the same would not be true in developing nations with a long history of creating and distributing other vaccines.

Bello welcomed President Joe Biden’s decision to back a TRIPS waiver for COVID-19 vaccines, saying he “did the right thing.” But the WTO still has to either come to a consensus or, if need be, vote on the TRIPS waiver. The task has become politically easier with the U.S. on board. And even if the waiver comes through, it will only be the first step before developing nations can begin manufacturing generic vaccines.

Bello rightly pointed out, “you’re running out of time. You have to start right now. The industry people are just creating all of this nonsense in order to hold on to their cash cows, which are the patents, and the processes of manufacturing.” In the meantime, hundreds of thousands of lives are at risk in the Global South as Western nations are reaching stability via mass vaccinations.

Sonali Kolhatkar is the founder, host and executive producer of “Rising Up With Sonali,” a television and radio show that airs on Free Speech TV and Pacifica stations. She is a writing fellow for the Economy for All project at the Independent Media Institute.

This article was produced by Economy for All, a project of the Independent Media Institute.

Anticopyright: Editorials and articles originated on TMS may be freely reprinted, disseminated, translated and used as background material, provided an acknowledgement and link to the source, TMS: Why Big Pharma’s Arguments against Patent Waivers Don’t Add Up, is included. Thank you.