The Institute for Research and Consulting Intelligence (Ipec) surveyed more than 2,000 Brazilians about their possible vote. 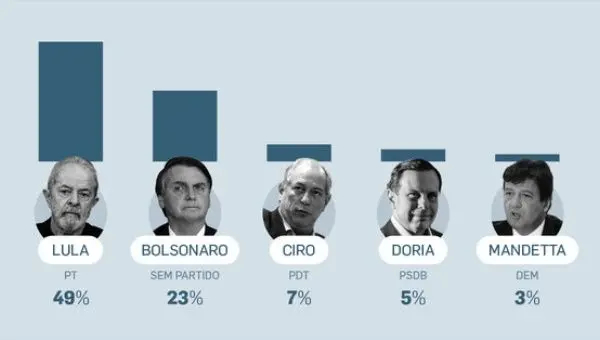 Lula has 49% of voting intentions and Bolsonaro, 23%, according to the Ipec survey. | Photo: Twitter/@estadão

25 Jun 2021 – The former Brazilian president, Luiz Inácio Lula da Silva, leads the polls for voting intentions in the country for the 2022 elections with an advantage of 49 percent, 26 points above Jair Bolsonaro, according to a survey released today.

The survey conducted by the Institute for Research and Consulting Intelligence (Ipec), noted that the ultra-right leader, Brazil’s current president, has a popularity that is declining, as only 23 percent of respondents would support him in an upcoming election.

In addition to Lula and Bolsonaro, the rest of the possible candidates do not reach double digits. For example, Ciro Gomes (PDT), would have 7 percent and João Doria (PSDB), 5 percent, while former Health Minister, Luiz Henrique Mandetta (DEM), would receive one percent.

Some 2,002 voters in 114 municipalities were consulted between June 17 and June 21. In these days the scandal of the overpriced purchase of more than 1,000 percent of the Indian vaccine Covaxin broke. In addition, Bolsonaro lost his temper in front of a journalist in Guaratiguetá.

These attitudes, together with the visit made by the Brazilian president to Rio Grande do Norte, this Thursday, where he took a child in his hands and ripped off his mask, which was described as humiliating by local media, may have influenced the results.

The former president is within the margin of error for an emphatic first round victory at the 2022 election.

Brazil has exceeded 500,000 deaths from the COVID-19 pandemic and the movement demanding Bolsonaro’s resignation held mass protests on May 29 and June 19 and another is planned for July 24.

Sixty-two percent of respondents said they would not vote for Bolsonaro at all, as opposed to 56 percent who said the same in the February poll. In contrast, Lula went from 44 percent rejection to 36 percent in the current poll.

Finally, voters who disapprove of Bolsonaro’s way of governing dropped from 38 percent to 20 percent since February and the disapproval rate rose from 58 percent to 66 percent.