Critical Race Theory and the Scam of the Ban

Critical race theory is too advanced to be taught in schools. So why are state authorities trying to ban it in the US? 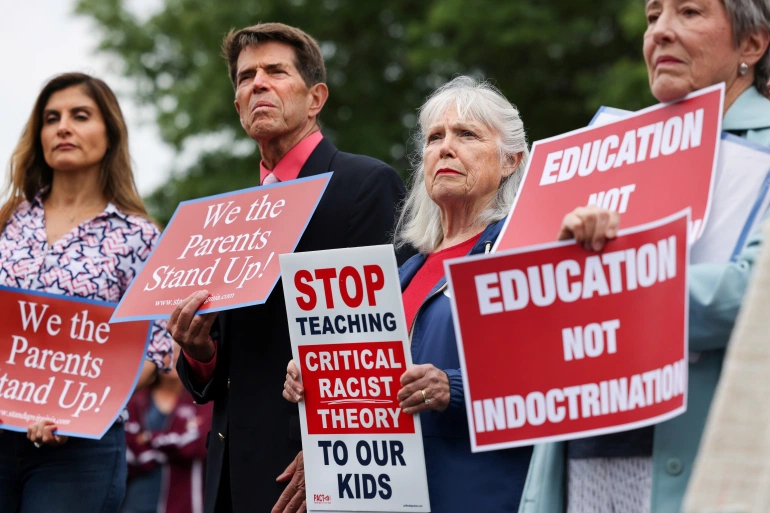 Opponents of the academic doctrine known as critical race theory protest outside of the Loudoun County School Board headquarters, in Ashburn, Virginia, on June 22, 2021. [Evelyn Hockstein/Reuters]

27 Jun 2021 – Once again, the racist and fascist American right is conning the American public, this time in declaring critical race theory an existential threat to the United States. It is coming after this concept, just as it did with the idea of political correctness in the 1990s and just as it is doing now with the so-called cancel culture.

Except that in the case of critical race theory, politicians have enacted laws to ban it from school and public college curricula in Texas, Idaho, Florida, Montana, Iowa, Tennessee and Oklahoma. Six other states and dozens of local school districts continue to debate the need to ban critical race theory from public schools.

If one goes deep into the weeds of these bans, they are not really about the dangers of teaching critical race theory at all. In fact, it does not seem that they reflect an understanding of what this theory is about.

Instead, these bans specifically want to cut out the 246-year history of African enslavement in colonial British America and in the US, and all common references to the history of institutional racism in the US. These bans specifically include the award-winning 1619 Project, edited by Nikole Hannah-Jones, whom the University of North Carolina Board of Trustee recently denied a tenured position.

Some of the proposed bills, like the bill that failed to pass in the Rhode Island state legislature earlier this year, unveiled the real intentions of those banning critical race theory. “This act would prohibit the teaching of divisive concepts and … prohibit making any individual feel discomfort, guilty, anguish or any distress on account of their race or sex,” the bill’s sponsors wrote.

That anyone would define “divisive concepts” as the equivalent of teaching the full history of the US and its history of systemic racism is ludicrous. The part about making anyone “feel discomfort” or “distress”, though, is incredibly revealing.

The Rhode Island bill lays bare white fragility, the absolute narcissistic desire for myth-making, for denying, deflecting and defending racism by labelling any anti-racism efforts as racist. Never mind the need to teach the truth, to hold peoples and systems accountable for the past and present racist and sexist injustices in the US.

The truth is, any explanation of history and the human condition is bound to bring “distress” or “anguish” because there is a very ugly side to both. The nature of all bans on critical race theory is a bait and switch, to declare the teaching of a more-inclusive history of the US and its racism as a racist act. This tactic centres whites and especially white males as victims, and Black and Brown scholars, especially Black women public intellectuals, as villains.

There is no consideration about Black, Brown and Indigenous American “discomfort” or “distress” with the teaching of a white-centred and white-washed history at all. There is no concern for Black or Indigenous students when they do somehow learn about the racism that led to their ancestors’ systemic enslavement or when they discover the genocidal policies against their people, whether in or outside a classroom. The majority of students in America’s public schools are Black and Brown, yet the bill’s only concern is fundamentally about white “individuals”.

It focuses on exposing the systemic racism that is embedded in every area of American law, in local, state and federal policies, and in everyday American culture and customs.

Critical race theorists question even the most basic and sacred assumptions about American society. And they do so through biography, allegory, storytelling, and not just through direct intellectual debate.

These theorists take interdisciplinary approaches, drawing from the law, literature, sociology, political science, psychology, physics, and yes, history, to show how fully infused American racism is in American history and culture. They humanise theory while taking apart concepts, constructs and contradictions from the inside-out, to get at American racism at both the quantum and cosmic levels.

One of the most prominent of critical race theorists was the late Derrick Bell, whose two allegorical nonfiction books And We Are Not Saved and Faces at the Bottom of the Well were New York Times bestsellers in the 1980s and 1990s. The first time I met Bell was in 1990 at a talk he gave at the University of Pittsburgh Law School, when I was a college senior majoring in history with a minor in Black Studies. Bell read from The Racial Preference Licensing Act, an early draft of an eventual chapter in Faces at the Bottom of the Well.

Its allegory was about the plausibility of a law allowing individual businesses the right to exclude Blacks from working for or seeking services from their establishments, after paying a reparations tax. These businesses would prominently display their licence to exclude and discriminate for anyone to see.

In putting together this allegory, Bell pulled from American law and history, from Jim Crow and from residential segregation customs across the US to pose this as one possible solution to unachievable racial integration in the US.

The law students and the civil rights activists in attendance exploded in anger at Bell’s allegory. Some, like my late friend Charles Houston, Jr (the son of Charles Hamilton Houston, one of the architects of the strategy that led to the US Supreme Court to declare legal segregation unconstitutional), all but called the former civil rights attorney a traitor.

Others thought Bell did not go far enough, and wanted him to call for stronger measures towards reparations and other redresses for slavery, Jim Crow, and centuries of economic exploitation.

I found the idea of using the law to expose the contradictions of American law and American racism fascinating. But there was no way for me to have fully understood the implications of Bell’s work, even with me less than 18 months away from completing my history master’s degree. It was obvious to me, though, that many of the law students in attendance on that late October day did not get Bell at all. Probably because law school was the first time they had ever heard of critical race theory.

Over the past four decades, other critical race theorists have contributed to the field, including MacArthur “genius” award winner Patricia J. Williams, intersectional feminist Kimberlé Crenshaw, and Richard Delgado. And yes, in the literary and history communities, there are others whose work contain most or all the main elements of critical race theory, making it both new and old at the same time.

There are writers like Octavia Butler who authored Kindred, Kiese Laymon who authored Long Division, Erica Armstrong Dunbar who authored Never Caught: The Washingtons’ Relentless Pursuit of Their Runaway Slave, Ona Judge, Roxane Gay who authored Bad Feminist, and Crystal M Fleming who authored How to be Less Stupid About Race. They have all found ways of turning what can be dense theory into textual art, applying ideas central to critical race theory in looking at everyday intersections between the past and present – all while suggesting possible futures.

But none of this is in America’s public schools. The knowledge and level of analysis needed to understand, teach, and interpret critical race theory as theory is at minimum an advanced course for a college senior in US history, legal studies, literature, social psychology, cultural anthropology or sociology. Most who do encounter critical race theory do not learn of it until law school or graduate school, Most students do not see it at all.

This is the snake oil that fascist conservative politicians and pundits have been attempting to pawn off as fact for the past six months.

Perhaps the false use of critical race theory as a means to banning the truth of how central America’s systemic racism is to American history and culture is just another ploy in the fascist conservative long game in their so-called culture wars.

Like the many lies former President Donald Trump told to rile up his supporters for the January 6 insurrection, the liars attacking critical race theory are peddling the myth of America as always great and good. Regardless of all evidence to the contrary.

Bell pulled no punches in Faces at the Bottom of the Well when he wrote, “racism is an integral, permanent, and indestructible component of this society”. By attempting to ban a theory that is really about uncovering the whole truth of American racism, critical race theory attackers are actually exposing their own deep-seated racism and wilful ignorance.

Donald Earl Collins – Lecturer of History at American University in Washington, DC., Collins is the author of Fear of a “Black” America: Multiculturalism and the African American Experience (2004).