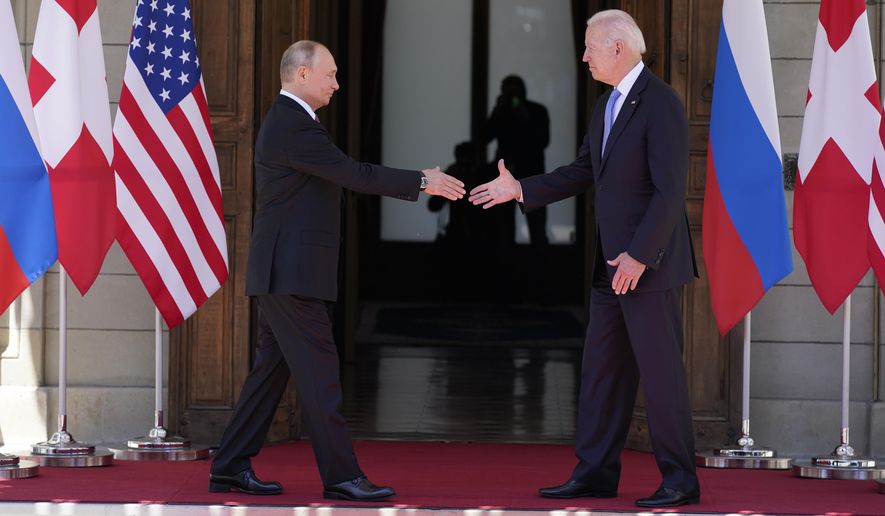 24 Jun 2021 – There were many voices in U.S. political circles and the media that this summit is a huge mistake because it will allow President Putin to appear on the world stage as an equal partner of the U.S. president.

The Hill’s headline screamed that “Biden loses to Putin at Geneva summit just by showing up.” Hudson Institute portrayed it as “Biden’s gift to Putin” because it will lead to “Empowering Russia, undermining the EU, a threat to the NATO alliance, and [increasing] Russian Influence on the German Political Elite.”

Mr. Biden believes that it was about “self-interest” since U.S.–Russia relations reached a critical point that may lead us into a nuclear Armageddon and any responsible American leader would be obliged to reverse this process. Former President Trump tried but failed miserably due to the fierce resistance of the U.S. establishment and the media. Mr. Biden has a better chance since he is their boy after all.

In the joint statement after the summit Mr. Biden and Mr. Putin said that even in periods of tension they were able “to make progress on our shared goals of ensuring predictability in the strategic sphere, reducing the risk of armed conflicts and the threat of nuclear war.”

Former U.S. Secretary of Energy Ernest Moniz and Sen. Sam Nunn who are co-chairs of the Nuclear Threat Initiative strongly endorsed the summit and the decision to begin a new bilateral dialogue on strategic stability to “move the world in a safer and more hopeful direction.”

Forming a working group on cyber security is another important step. In the era of rapidly growing IT technologies cyber threats are quickly becoming as dangerous as nuclear ones and therefore new treaties in this area are long overdue.

Finally, on the positive side, Ambassadors Antonov and Sullivan will return to their respective Washington and Moscow offices and there was a talk that may result in the prisoner swap.

However, when it came to the issues of human rights and meddling in the internal affairs there was a usual exchange of accusations that were expected but added nothing to the substance of mutual security or strategic stability.

Mr. Biden spoke about the advantages of democracy vs. autocracy and America’s greatness in line with former President Obama’s words of “exceptionalism” and “indispensability” but bringing DNA into conversation about America’s ideas of universal freedom and human rights sounded problematic and some said pathetic.

America indeed was founded as a group of self-governing English people who politically broke away from the British crown but as the history professor of American University Peter Kuznick sarcastically noted: “Maybe Biden never learned that the U.S. was actually founded on the massacre of Native Americans and on slavery of Africans.”

Closer to our times the obvious question would be how a good American DNA corresponds to Vietnam, Iraq, Libya, Syria, and many other endless wars with millions of victims, tens of millions of refuges, plus misery and  devastations imposed on many countries around the world?

When Mr. Biden accused Mr. Putin in the meddling of U.S. elections and asked, “How would it be if the United States were viewed by the rest of the world as interfering with the elections of other countries and everybody knew it?”  Mr. Kuznick noted that “the United States has been interfering in other countries’ elections with great regularity since the founding of the CIA in 1947 and the world does know it.“

For his part, Mr. Putin’s response to human rights violations was also less on substance but more on “Whataboutism” which means discrediting an opponent’s position by charging them with hypocrisy. This exchange brought nothing related to the main summit’s subject of avoiding a nuclear holocaust.

Another summit failure was the lack of a serious discussion about Ukraine. Biden did confirm that the Minsk accords show the roadmap to peace but no details as to how these accords should be enforced have been announced.

Hopefully Mr. Biden will talk about this with Ukrainian President Zelensky during their July meeting in Washington but the establishment, including members of Mr. Biden’s foreign policy team who actually helped to orchestrate 2014 Maidan coup, are not interested in ending this conflict.

Professor Nicolai Petro of the University of Rhode Island believes that “the top priority for the United States will continue to be preventing any mutually beneficial relationship between Ukraine and Russia, regardless of their political systems….any politician who considers such a rapprochement as in the best interests of his country, will be labeled a threat to U.S. national security.”

Professor Glenn Diesen of the University of South-Eastern Norway goes even further when he states that instead of helping to build democracy in Ukraine America “helped destroy democracy and turn Maidan dream into a nightmare for its people.”

Mr. Zelensky was elected with the broad people’s mandate for peace, but after transition from a comic actor to political leader his rhetoric and actions are contrary to campaign pledges. Nowadays he demands the rewriting of Minsk accords, clamps down on political opposition and the media, and makes no efforts to stop the rise of neo-Nazi influence.

Recently a group of French senators visited his country and was horrified by the neo-Nazis’ increasingly visible activities, including “recruitment offices for young people for militias that clearly claim Nazi ideology.” Senators officially submitted a request to the French Foreign Ministry to “know what the position of the Ministry for Europe and Foreign Affairs is on this subject and what measures it intends to take to avoid the contagion of this deadly ideology.”

So far, there is no similar criticism from Washington or even from the U.S. Jewish community. At the same time, U.S. and NATO money and advisers, military hardware, including the lethal weapons, keep moving into Ukraine to prepare it for war with Russia.

To conclude, the Geneva summit brought us a glimpse of hope but the road to strategic stability and peace is pretty foggy while the clear and present danger is still around us.

Edward Lozansky is president of American University in Moscow.