The regional bloc must support the growing calls for a global arms embargo on Myanmar. 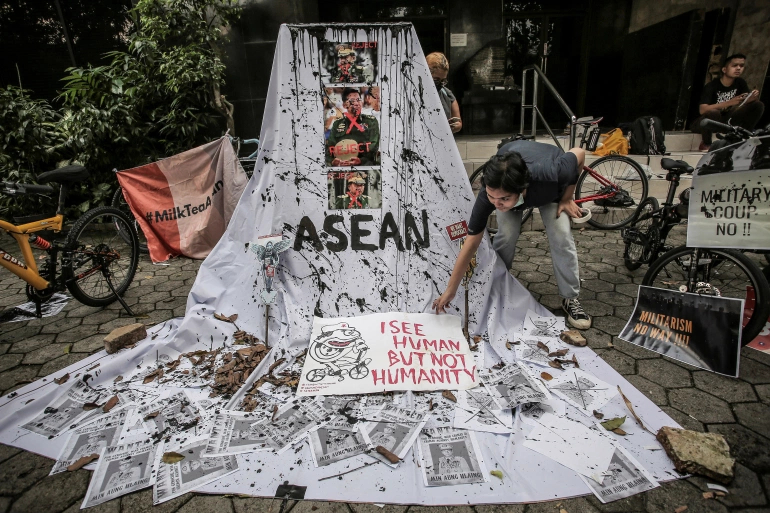 A woman prepares a placard from crossed out portraits of Myanmar’s military chief Senior General Min Aung Hlaing during protests against the military coup in Myanmar, in Jakarta, Indonesia, on April 24, 2021. [Antara Foto/Dhemas Reviyanto/ via Reuters]

4 Jun 2021 – Words alone have failed to persuade the Myanmar military to stop killing and jailing its civilian opponents. Both the United Nations Security Council (UNSC) and the Association of Southeast Asian Nations (ASEAN) have called on the Myanmar military to cease its use of violence. The military defies these calls, and the killing spree and arbitrary detentions continue.

A more meaningful source of pressure – a comprehensive global arms embargo – continues to prove elusive, with the UNSC once again gridlocked. China, Russia and India are prime weapons providers to the Myanmar military.

In the face of the UNSC’s failure to act, ASEAN’s failure to lead is especially disappointing. The international community has shown deference to ASEAN in addressing the human rights crisis in its member Myanmar, but instead of rising to the occasion, ASEAN has taken the mantle and to date has stumbled.

On April 24, the leaders of ASEAN released a consensus statement calling for the “immediate cessation of violence in Myanmar.” Myanmar immediately disavowed this statement. ASEAN has since failed to implement or urge measures to stop the killing, or even name the special envoy provided for in the statement. ASEAN must make clear the timeframe to implement the five-point consensus and what the consequences will be if the military leaders defy this call.

ASEAN states are also involved in negotiations with the core group from amongst more than 50 UN member states sponsoring a UN General Assembly (UNGA) resolution to address the human rights crisis in Myanmar.

To their credit, the ASEAN states now appear prepared to join the UNSC in calling for the immediate and unconditional release of government officials and thousands of others who have been arbitrarily arrested, detained or charged.

This isn’t just the right thing to do, it’s clearly necessary as the dialogue and mediation which ASEAN claims to lead will be all but impossible while the civilian opposition remains imprisoned.

But the regional bloc must do more. ASEAN must also support the momentum towards a global arms embargo, a call endorsed by more than 200 civil society organisations, including Amnesty International, and many member states in the UNGA. Rather than embrace this call, ASEAN members have so far demanded the call for all states to suspend the sale or transfer of all weapons, munitions and other military-related equipment to Myanmar be deleted from the draft UNGA resolution.

It is this action by states, especially if made mandatory by a UNSC resolution, that can begin to enforce the international community’s demands on the Myanmar military to stop gunning down peaceful protesters throughout the country and unlawfully killing civilians in armed conflict-affected areas, end mass arrests and release the thousands of people it has arbitrarily detained.

While ASEAN itself cannot impose an arms embargo, it should be urging the UNSC to do so as the Myanmar military continues to use lethal violence and arbitrary detentions against its civilian opposition.

The Myanmar crisis is the biggest threat to ASEAN’s credibility, all while the situation continues to evolve into a major human rights and humanitarian crisis with aftershocks throughout the region.

In this worsening context, ASEAN is holding back critical means for international pressure – all the way up to the UNSC.

Meanwhile, the military’s defiance knows no bounds. When the UNSC issued a presidential statement on March 10 condemning the violence and urging “utmost restraint,” 60 people had reportedly been killed.

By June 2, that total number was 842. Empty diplomatic rhetoric is costing lives.