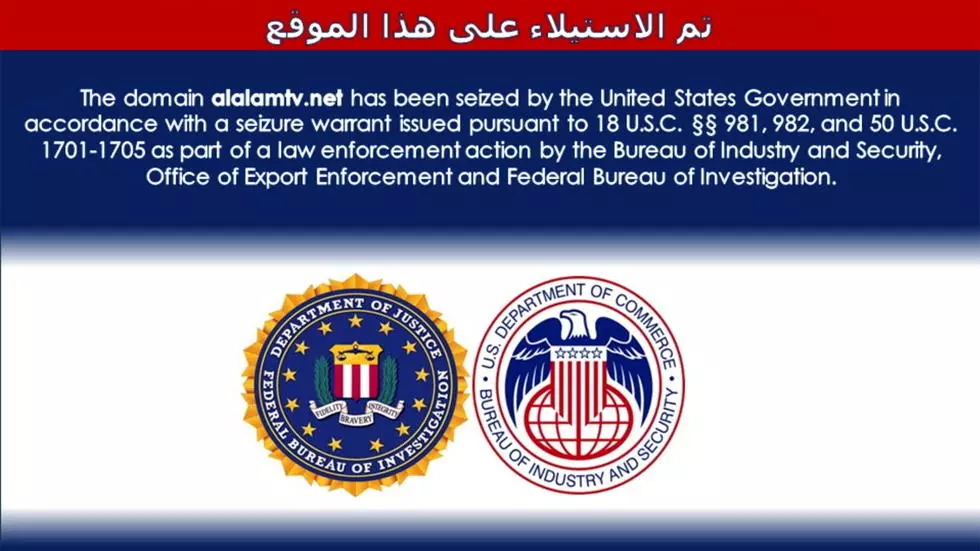 The website of Iran’s Arabic language Al Kawtathar television is seen with a notice which appeared on a number of Iran-affiliated websites saying they had been seized by the United States government as part of law enforcement action, in a screenshot taken June 22, 2021. © via Reuters

Each site displayed a single page with a statement that it “has been seized by the United States Government” and making reference to US sanctions laws, accompanied by the seal of the FBI and the US Department of Commerce.

Islamic Republic of Iran Broadcasting (IRIB), the parent of Al-Alam, reported that other web domains, including Palestine-Al Youm, a Palestinian-directed broadcaster, and an Arabic-language religious and cultural channel were also seized.

Domains tied to Iran-backed groups in Iraq and to Hezbollah, the Lebanese military-political faction, were also frozen with the US Justice Department message.

IRIB accused the United States of repressing freedom of expression and joining forces with Israel and Saudi Arabia “to block pro-resistance media outlets exposing the crimes of US allies in the region”.

Tehran issued a statement Wednesday saying that the move was “not constructive” for ongoing talks on bringing Washington back into a landmark nuclear deal.

“We are using all international and legal means to … condemn … this mistaken policy of the United States,” the director of the president’s office, Mahmoud Vaezi, told reporters.

Asked during a US State Department briefing about the Press TV seizure, spokesman Ned Price declined to comment, but referred reporters to the Justice Department which he said was expected to provide information soon.

Bahrain’s LuaLua TV, a channel run by opposition groups with offices in London and Beirut, was also closed, according to an AFP correspondent in the region.

In Yemen the Houthis said on the website of their political wing that they condemned “this American piracy and copyright confiscation”.

“The government of the United States of America is banning the Al-Masirah website without any justification or even prior notice,” they said.

A-Masirah quickly established a new website, using its name but swapping the .net domain for .com.

The United States maintains strict sanctions on Iran due to its nuclear weapons programmes and alleged support for terror.

Hundreds of Iranian organisations and individuals have been placed on the US sanctions blacklist.

The sanctions forbid Americans and businesses and organisations with US operations from doing any business with Iran.

The US action came as Washington seeks to restore the 2015 agreement between Tehran and six major countries to freeze its nuclear programme in exchange for lifting sanctions.

In 2018 then-president Donald Trump ordered the United States to withdraw from the agreement, alleging that Iran was not adhering to its commitments, though independent nuclear inspectors said it was.

Upon taking office this year, President Joe Biden committed to rejoining the agreement and talks with Iran on what both sides would do to resume the pact have gone on for weeks.

EU negotiator Enrique Mora said on Sunday that those involved in the talks were “closer” to saving the Iran nuclear deal but that sticking points remain.