What Went Right This Week: A Soaring Conservation Success, Plus More Positive News

17 Jun 2021 – Scotland celebrated a conservation success story, the real winner of the Euros was revealed, scientists found a novel use for plastic… 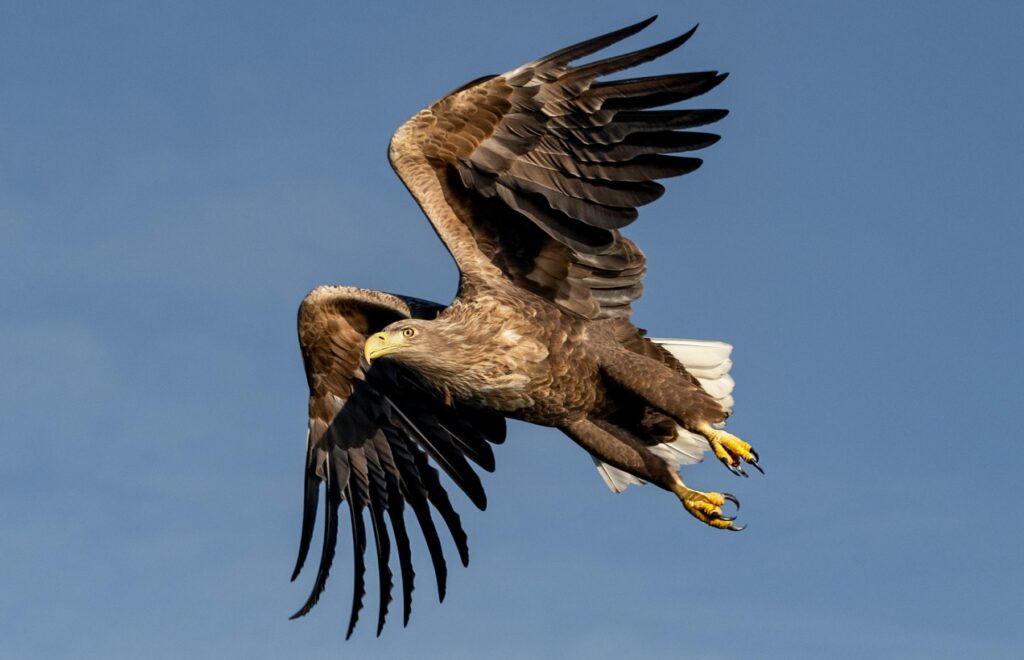 Twitchers are aflutter this week after white-tailed eagles were spotted at Loch Lomond for the first time in over a century. A pair of the raptors were seen ‘nest prospecting’, suggesting they intend to stay.

Persecution and habitat changes pushed the birds to extinction in the UK in the early 20th century. However, subsequent reintroductions have seen them recolonise Scotland where there are now believed to be more than 150 breeding pairs.

Migration was declared the real winner of the Euros

With the Euros getting under way last weekend, a campaign kicked off to highlight how migration has shaped the beautiful game. Launched by London’s Migration Museum, Football Moves People aims to tackle racist sentiment at matches and beyond.

The billboard and social media campaign comes as boos ring out from the stands at some matches while footballers take the knee in an anti-racism gesture.

All nations competing in the Euros have squad members who are playing outside of their home countries. The museum’s campaign celebrates migrants that shaped the sport, and highlights how different teams would look were it not for migration.

“It’s no exaggeration to say that without migration, football as we know it wouldn’t exist,” said Robyn Kasozi, head of public engagement at the Migration Museum. “It’s time to put migration at the heart of our national conversations, and with tens of millions of us watching the Euros this summer, where better to start than with football?”

London’s ‘front door’ is to get a radical revamp

Anyone who has jostled for space on its crowded pavements, or had to breathe its toxic air will attest to Oxford Circus being an uninspiring place to visit. But not for much longer, perhaps.

This week, plans were unveiled to turn London’s busiest shopping area into a series of leafy, pedestrian-only piazzas. Space clawed back from cars will feature trees and seating to encourage people to linger.

The pandemic appears to have hastened efforts to make city centres more pleasant for pedestrians. In Paris, plans were recently announced to turn the traffic-choked Champs-Élysées into an ‘extraordinary garden’. Madrid, Barcelona and Birmingham are among the other cities with proposals to reclaim the public realm from cars.

Plastic was converted into vanilla flavouring

Like modern-day alchemists, researchers at the University of Edinburgh have found a way of turning plastic waste into safe-to-eat vanilla flavouring. How appetising that will be remains to be seen.

The process uses lab-engineered E. coli bacteria to convert polyethylene terephthalate into vanillin, which is is the primary component of extracted vanilla beans and is responsible for the characteristic taste and smell of vanilla.

Researchers said the discovery highlights the role of microbial science is the burgeoning circular economy.

Stephen Wallace of the University of Edinburgh, who worked on the research, said: “This is the first time that bacteria have been used to make vanillin from plastic waste. This is exciting to us as it means we can also turn plastic into other useful chemicals in an environmentally friendly way.”

The secret to rewilding? Let the jays do it – report

As nations scale-up tree planting efforts to help stabilise the climate, a new study advocates leaving the heavy lifting to jays. Researchers monitoring two new woodlands in Cambridgeshire found that half the trees growing there had been planted by the birds.

Like squirrels, jays bury acorns in the ground ahead of winter. Many of those turn into oak trees. The birds are, of course, one of many species whose behaviour facilitates the natural regeneration of forests.

The study, published in the journal Plos One, makes a case for using natural regeneration – also know as ‘passive rewilding’ – to meet the UK’s woodland creation targets.

“Biodiversity-rich woodland that is resilient to drought and reduces disease risk can be created without any input from us,” said Dr Richard Broughton of the UK Centre for Ecology & Hydrology, who led the research. “Our study provides essential evidence that passive rewilding has the potential to expand native woodland habitat at no cost and within relatively short timescales.”

Activists who helped disrupt the illegal trade in pangolins, who led successful campaigns to ban plastics, and who prevented coal-fired power plants from opening were among the winners of this year’s Goldman environmental prize, a global award for environmental activism.

The six victors were: Sharon Lavigne (pictured), who stopped a plastic factory from opening in her native US; Vietnam’s Thai Van Nguyen, who rescued 1,540 pangolins from wildlife traffickers; Maida Bilal, who led a 503-day blockade of a dam in Bosnia and Hercegovina; Gloria Majiga-Kamoto, who challenged the plastics industry in Malawi and won; Kimiko Hirata, who helped persuade the Japanese government to cancel 13 coal power plants; and Liz Chicaje Churay, whose tireless campaigning led to the creation of Yaguas National Park in Peru.

“These phenomenal environmental champions remind us what can be accomplished when we fight back and refuse to accept powerlessness and environmental degradation,” said Susie Gelman, vice president of the Goldman Environmental Foundation.

The UK supermarket Asda announced this week that it will roll out packaging-free shopping at more of its shops, following a successful trial in Leeds. Customers will be able to refill their own containers with grains, detergents and other goods.

Asda said the Leeds pilot exceeded its expectations, and that some goods outperformed packaged sales. The new stores offering refill zones will be in York, Buckinghamshire, Warwickshire and Glasgow.

Susan Thomas, director of commercial sustainability at Asda, said: “Our ultimate goal is to make refill and reuse a part of every Asda shopping trip and to achieve this, we have to make it easy, accessible and affordable for all our customers to shop this way.”