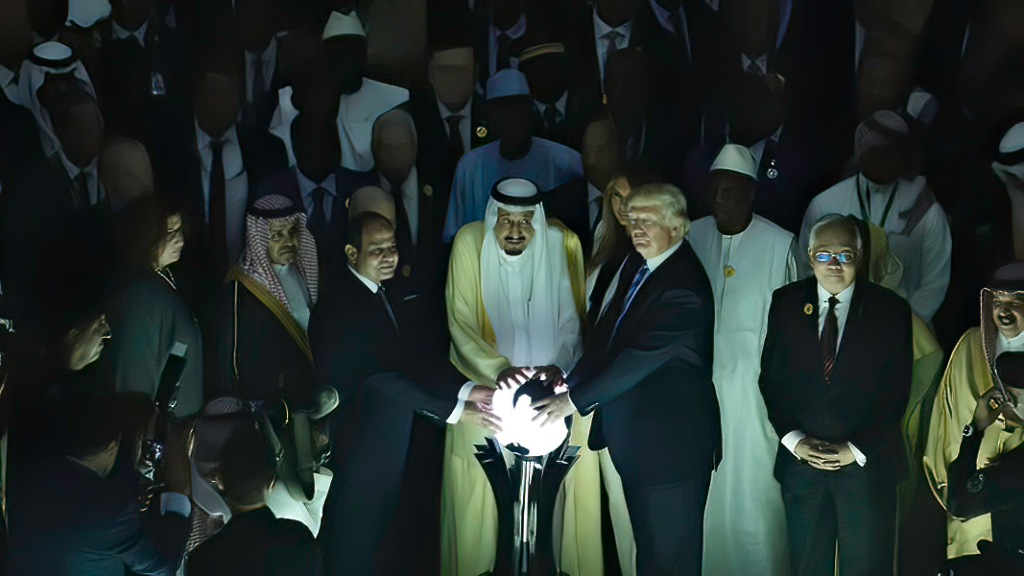 The greatest conspiracies are open and notorious — not theories, but practices expressed through law and policy, technology, and finance. Counterintuitively, these conspiracies are more often than not announced in public and with a modicum of pride. They’re dutifully reported in our newspapers; they’re bannered onto the covers of our magazines; updates on their progress are scrolled across our screens —  all with such regularity as to render us unable to relate the banality of their methods to the rapacity of their ambitions.

The party in power wants to redraw district lines. The prime interest rate has changed. A free service has been created to host our personal files. These conspiracies order, and disorder, our lives; and yet they can’t compete for attention with digital graffiti about pedophile Satanists in the basement of a DC pizzeria.

This, in sum, is our problem: the truest conspiracies meet with the least opposition.

Or to put it another way, conspiracy practices — the methods by which true conspiracies such as gerrymandering, or the debt industry, or mass surveillance are realized — are almost always overshadowed by conspiracy theories: those malevolent falsehoods that in aggregate can erode civic confidence in the existence of anything certain or verifiable.

In my life, I’ve had enough of both the practice and the theory. In my work for the United States National Security Agency, I was involved with establishing a Top-Secret system intended to access and track the communications of every human being on the planet. And yet after I grew aware of the damage this system was causing — and after I helped to expose that true conspiracy to the press — I couldn’t help but notice that the conspiracies that garnered almost as much attention were those that were demonstrably false: I was, it was claimed, a hand-picked CIA operative sent to infiltrate and embarrass the NSA; my actions were part of an elaborate inter-agency feud. No, said others: my true masters were the Russians, the Chinese, or worse — Facebook.

As I found myself made vulnerable to all manner of Internet fantasy, and interrogated by journalists about my past, about my family background, and about an array of other issues both entirely personal and entirely irrelevant to the matter at hand, there were moments when I wanted to scream: “What is wrong with you people? All you want is intrigue, but an honest-to-God, globe-spanning apparatus of omnipresent surveillance riding in your pocket is not enough? You have to sauce that up?”

It took years — eight years and counting in exile — for me to realize that I was missing the point: we talk about conspiracy theories in order to avoid talking about conspiracy practices, which are often too daunting, too threatening, too total.

It’s my hope in this post and in posts to come to engage a broader scope of conspiracy-thinking, by examining the relationship between true and false conspiracies, and by asking difficult questions about the relationships between truth and falsehood in our public and private lives.

I’ll begin by offering a fundamental proposition: namely, that to believe in any conspiracy, whether true or false, is to believe in a system or sector run not by popular consent but by an elite, acting in its own self-interest. Call this elite the Deep State, or the Swamp; call it the Illuminati, or Opus Dei, or the Jews, or merely call it the major banking institutions and the Federal Reserve — the point is, a conspiracy is an inherently anti-democratic force.

The recognition of a conspiracy — again, whether true or false — entails accepting that not only are things other than what they seem, but they are systematized, regulated, intentional, and even logical. It’s only by treating conspiracies not as “plans” or “schemes” but as mechanisms for ordering the disordered that we can hope to understand how they have so radically displaced the concepts of “rights” and “freedoms” as the fundamental signifiers of democratic citizenship.

In democracies today, what is important to an increasing many is not what rights and freedoms are recognized, but what beliefs are respected: what history, or story, undergirds their identities as citizens, and as members of religious, racial, and ethnic communities. It’s this replacement-function of false conspiracies — the way they replace unified or majoritarian histories with parochial and partisan stories — that prepares the stage for political upheaval.

Especially pernicious is the way that false conspiracies absolve their followers of engaging with the truth. Citizenship in a conspiracy-society doesn’t require evaluating a statement of proposed fact for its truth-value, and then accepting it or rejecting it accordingly, so much as it requires the complete and total rejection of all truth-value that comes from an enemy source, and the substitution of an alternative plot, narrated from elsewhere.

The concept of the enemy is fundamental to conspiracy thinking — and to the various taxonomies of conspiracy itself. Jesse Walker, an editor at Reason and author of The United States of Paranoia: A Conspiracy Theory (2013), offers the following categories of enemy-based conspiracy thinking:

Another critique I would offer of the extant taxonomies involves a reassessment of causality, which is more properly the province of psychology and philosophy. Most of the taxonomies of conspiracy-thinking are based on the logic that most intelligence agencies use when they spread disinformation, treating falsity and fiction as levers of influence and confusion that can plunge a populace into powerlessness, making them vulnerable to new beliefs — and even new governments.

But this top-down approach fails to take into account that the predominant conspiracy theories in America today are developed from the bottom-up, plots concocted not behind the closed doors of intelligence agencies but on the open Internet by private citizens, by people.​​​​​​​

In sum, conspiracy theories do not inculcate powerlessness, so much as they are the signs and symptoms of powerlessness itself.

From Outside, from Within, from Above, from Below, from Beyond…events, systems, superconspiracies…shallow and deep heuristics…these are all attempts to chart a new type of politics that is also a new type of identity, a confluence of politics and identity that imbues all aspects of contemporary life. Ultimately, the only truly honest taxonomical approach to conspiracy-thinking that I can come up with is something of an inversion: the idea that conspiracies themselves are a taxonomy, a method by which democracies especially sort themselves into parties and tribes, a typology through which people who lack definite or satisfactory narratives as citizens explain to themselves their immiseration, their disenfranchisement, their lack of power, and even their lack of will.