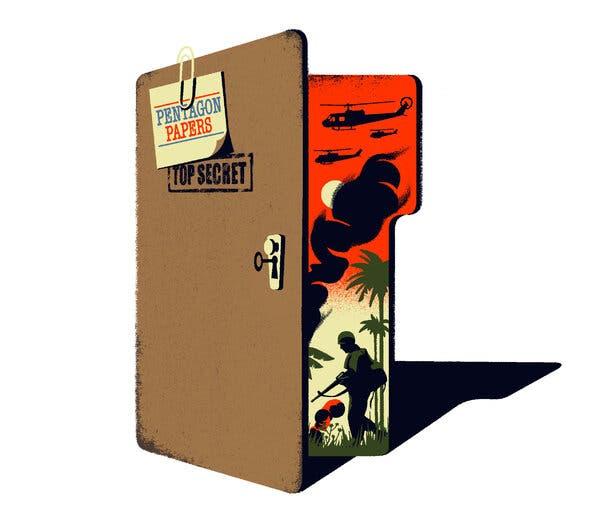 1 Jul 2021 – This past June 13th, The New York Times celebrated the 50th anniversary of its publishing the Pentagon Papers. In a special section, “Uncovering the Secret History of the Vietnam War,” it told how a team of 50 reporters, researchers and editors worked on the story for nearly four months, holed up in a “whole group of suites” at a New York City Hilton Hotel—to ensure their secrecy.

The section listed some of the largest lies the Papers exposed—many of which The New York Times had itself published as fact at different times during the war. It also described the drama to get the story in print—which included a team of lawyers weighing the legal risks.

On the same day, the paper ran two opinion pieces in the Sunday Review section: one by Andrew Bacevich, a Vietnam War veteran, retired Army colonel and Boston University emeritus professor, and the other by Gabriel Schoenfeld, a senior fellow at the Niskanen Center.

Bacevich’s article, “Secrets That Were Not Secret. Lessons That Weren’t Learned,” chronicled the lies—not just about Vietnam—but also of other U.S. military misadventures. He lamented the “misguided thinking that got us into that war” as well as “delusions and dishonesty regarding the role of military power that persist.

“I lived the mistakes the Pentagon Papers revealed, then saw them repeated.” He points to Afghanistan as the most recent example, where “it was déjà vu all over again.”

Schoenfeld’s piece, “Leaking the Pentagon Papers Was an Assault on Democracy,” took a mirror opposite view. He argued that the public should never have seen the Pentagon Papers. Why? He insists “secrecy is crucial to the conduct of democracy.”

He also claims publishing the Papers served no purpose. “The American people already knew the war was going badly” and didn’t need the Pentagon Papers to learn the truth.” In fact, he says, “the revelations were met with a collective yawn.”

Given the content of the 16 pages of the special section, we can assume the New York Times thought otherwise.

In one piece, former New York Times foreign correspondent Elizabeth Becker says that, when the Pentagon Papers were exposed, “the nation was stunned. Responses ranged from horror to anger to disbelief.” She adds that the revelations “infuriated a country sick of the war, the body bags of young Americans, the photographs of Vietnamese civilians fleeing U.S. air attacks.”

Still, Schoenfeld holds his ground. And he blasts Daniel Ellsberg and Edward Snowden—America’s two most famous whistleblowers—as having betrayed their country’s trust.

He says that “Ellsberg was accountable to no one and decided he should steer the ship of state,” adding that the public “did not favor the precipitous withdrawal that he and his compatriots in the anti-war movement were calling for.” Worse, he says Ellsberg “illegally exploited his privileged access to secret information to advance the views of a small but highly vocal minority.”

Schoenfeld evidently didn’t check the Gallup polls taken during the war which showed that, by 1971, 60% of Americans thought sending troops to Vietnam was wrong.

He saves his strongest rebuke for Snowden. Schoenfeld insists that his “indiscriminate dumping into the public domain of numerous other highly sensitive intelligence and counterterrorism operations makes him someone who should be tried, convicted and jailed under the espionage statutes.”

However, to date, neither the National Security Agency nor any other U.S. intelligence service has listed a single program or person harmed by Snowden’s revelations.

Who is Schoenfeld and who does he work for?

So who is Gabriel Schoenfeld? And who are the folks at the Niskanen Center—which was founded in 2014 by a former Cato Institute member, Jerry Taylor, who, before that, was director of an energy task force at the Koch brothers-funded American Legislative Exchange Council (ALEC).

The title of Schoenfeld’s 2010 book—Necessary Secrets: National Security, the Media, and the Rule of Law—makes clear his opinion about whistleblowers. Running his opinion piece was evidently the Times’ bid to follow a “both sides” scenario—though some editors may sympathize with his views.

A Republican, formerly at the Hudson Institute, Schoenfeld served as a “senior advisor” in Mitt Romney’s 2012 presidential campaign. In the late 1970s, he worked as an aide to New York Senator Daniel Patrick Moynihan, a godfather of neo-conservatism, and in the 1980s was a foreign service officer with the United States Information Agency (USIA) in the Soviet Union.

Schoenfeld’s opinion pieces have been published in many mainstream U.S. newspapers and magazines, but all of them highlight his neo-conservative views. He was also a senior editor at Commentary magazine from 1994 to 2008, which offered him a long-term platform for his positions.

In a March 2006 Commentary article, he argued that the government should prosecute some New York Times reporters and editors under the Espionage Act—after the newspaper blew the whistle on the National Security Agency’s massive warrantless surveillance of Americans.

As for the Niskanen Center, its website describes itself as a libertarian think tank that advocates for “environmentalism, immigration reform, civil liberties and a national defense policy based on libertarian principles.”

In practice, what does this mean? Besides promoting carbon taxes to meet the challenge of climate change, its website also offers a “Media Bias/Fact Check.” Here it does a Herculean job of classifying more than 1,000 U.S. and foreign publications/media according to what it calls their “biases”—which run from “left-center, right-center, right, conspiracy-pseudoscience and questionable sources.”

Under “left-center,” Niskanen inserts a sub-category for just plain “left.” This list of over 350 publications/media is defined as “moderately to strongly biased towards liberal causes through story selection and/or political affiliation. They may utilize strong loaded words (that attempt to influence an audience by using appeal to emotion or stereotypes), publish misleading reports and omit reporting of information that may damage liberal causes. Some sources in this category may be untrustworthy” (italics added).

Which media make it to this list? It’s not surprising to see Workers World and the “World Socialist Web Site” but what about BillMoyers.com, Washingtonian, Vanity Fair, Ms. magazine, JoeBiden.com, Haaretz.com, GQ, Esquire, and the Center for Media and Democracy (prwatch.org)?

Under “left-center,” it has more than 500 entries, which the site says have “a slight to moderate liberal bias.

“They often publish factual information that utilizes loaded words (wording that attempts to influence an audience by using appeal to emotion or stereotypes) to favor liberal causes.  These sources are generally trustworthy for information, but may require further investigation.”

Besides including the New York Times, Niskanen throws in ABC, CBS, BBC and Bloomberg News, ESPN and the Nature Conservancy. Evidently uncertain about some of its criteria, Niskanen included a few groups in both the left and left-center lists.

Perhaps more interesting is the group of over 500 publications/media that Niskanen calls the least biased … most credible media sources.”

The blurb says they use “very few loaded words … and their reporting is factual and usually sourced. Besides Niskanen’s own publications, it includes some of the wire services, such as AP, UPI, Reuters and Agence France Press and scores of small newspapers (e.g., The Cape Cod News).

Niskanen’s fondness for military media is not surprising. The Center had a $3.5 million budget in 2017 (the latest figure online) and its largest funder—which gave $1.3 million in 2019-2020—is the William and Flora Hewlett Foundation. Besides selling us printers and computers, Hewlett-Packard, whose co-founder established the Foundation, is a major defense contractor: The U.S. Navy awarded it a $3 billion contract in 2010, which was renewed three years later, and the Defense Information Systems Agency gave it a $61 million contract in 2020.

Niskanen also received a $250,000 grant in 2020 from the Quadrivium Foundation, the group created by James Murdoch (son of Rupert). As CEO of 21st Century Fox from 2015 to 2019, he presided over the network when it zealously promoted Donald Trump.

Another major supporter is the Peter Peterson Foundation. Peterson, who died in 2018, was Nixon’s Secretary of Commerce, co-founder of the Blackstone Group, and chairman of Lehman Brothers in the 1970s. According to Forbes, his net worth was $2.8 billion in 2017. Its site says the Foundation is dedicated to promoting fiscal austerity and denouncing the country’s debt and deficit.

And these policies continue to be widely advanced because of the big money interests behind them.

Barbara Koeppel is a free-lance investigative reporter based in Washington DC. She can be reached at bkoeppel@comcast.net.