Riding the Wave: Defense Revenues Rise Despite a Dark 2020 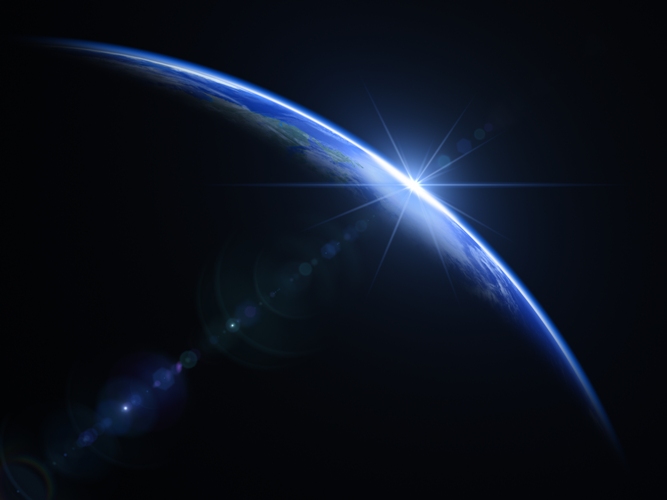 12 Jul 2021 – Defense revenues of the top 100 defense companies in the world climbed for a fifth consecutive year, a sign that fiscal 2020 was good for the industry despite the crippling coronavirus.

The pandemic was tough on the commercial side of the global aerospace industry, as it sapped demand for air travel, but the list bears out an expectation that the defense industry would hold steady.

“The defense industry, really because it was a critical industry, figured out how to keep people working — limiting the amount of people on the production lines, social distancing, the whole bit. They were able to adjust, keep the production lines going and also prove that lots of engineering and research and development can be done remotely,” said Bill Greenwalt, a former Pentagon industrial policy official who is now with the American Enterprise Institute think tank.

“[COVID-19] doesn’t seem to have affected the productivity of the defense industry from a revenue standpoint, but also we didn’t hear of a lot of [program] slippages. We have to recognize there were some, but from what was expected, the numbers are really good because they’re increasing.”

The top 10 firms represent more than 50 percent of the defense revenues on this year’s list, and the top 25 firms account for nearly 75 percent.

Geopolitically, the list paints a picture of Western dominance, said the Lexington Institute’s Daniel Goure. America’s selection in April of a design from Italian firm Fincantieri (No. 49 on the list) for the U.S. Navy’s next-generation frigate speaks to the growing integration between the U.S. and its allies, he said.

“There are only two Russian companies in the top 50 companies, so even if you had a Russia-China alliance, the answer is: ‘Eh, no big deal,’ ” Goure said. “The current administration is really talking about the reliance on allies, so it’s really significant. And together with those allies, the West just dominates. They tower above everybody else.” 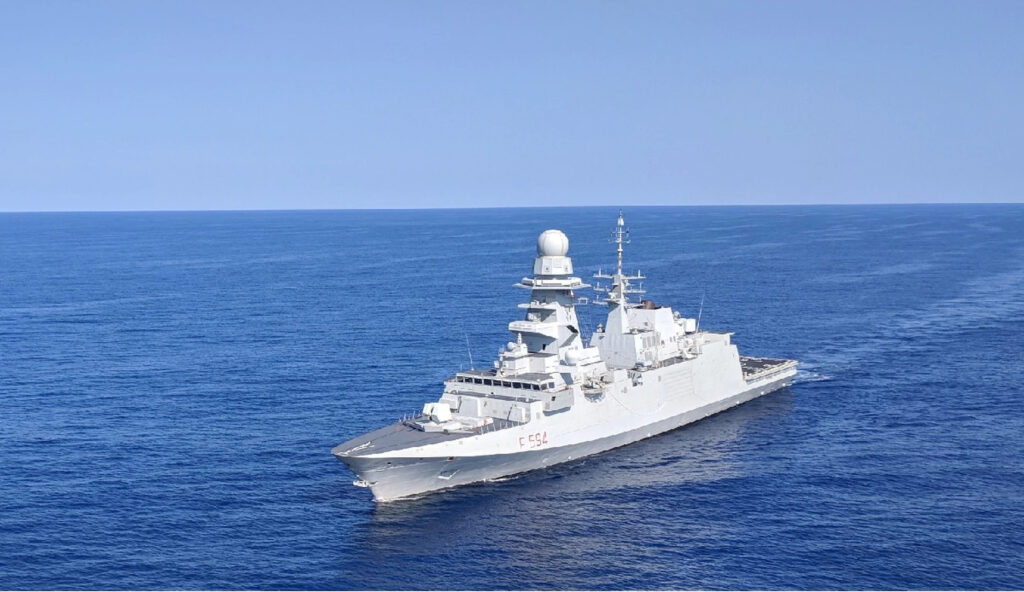 The Italian FREMM Alpino is shown underway off the coast of Virginia during its 2018 deployment to the East Coast. The U.S. Navy picked Italian firm Fincantieri to build its future frigate based on the FREMM design. (Staff)

Twenty-four firms from Europe (including Turkey and Ukraine, but excluding Russia) made the list. The combined defense revenue of those companies made up 18 percent of the list’s total. The U.K.’s BAE Systems ranked No. 7, one of seven British firms overall.

China had a strong showing this year, with seven firms on the list, all in the top quarter and with a combined $95.6 billion in defense revenue. That’s about even with combined defense revenue for firms from NATO countries (excluding the U.S.) — $97 billion — and it’s far more than the other Asia-Pacific firms (excluding Russia) on the list combined, at $22 billion.

According to International Institute for Strategic Studies scholars Meia Nouwens and Fenella McGerty, whose research provided the basis for the list’s China data, the move to consolidate shipbuilding entities is not unique to the country; other nations are responding in similar ways to sluggish global growth that was exacerbated by the pandemic.

In order to fulfill Chinese ambitions, collaboration has been a key factor in China’s defense sector, with a spate of innovation-focused, strategic cooperation agreements between firms, they said. Chinese shipbuilding efforts continue to support Beijing’s blue-water naval ambitions, supported by the at-sea presence of its Coast Guard and maritime militia.

“Maritime power projection for Beijing within the region is still prioritized for within the first island chain, while they’re working towards power-projection capabilities beyond that,” Nouwens said. “We’re also seeing an uptick in the air domain around Taiwan, with the ‘Taiwan problem,’ as Beijing calls it, becoming more important.”

China considers self-ruled Taiwan a rogue province and has vowed to reincorporate the island with the mainland, using force if necessary.

“[In] the South China Sea, China may face an increasing number of actors — extra-regional actors, as some European countries have shown interest in becoming more present and engaged. That continues to put a big focus on this area of industry for China,” Nouwens added.

Neighboring nation Ukraine is represented once on the list: Ukroboronprom comes in at 97th place, with $650.6 billion. Its defense revenue fell 15 percent from FY19 to FY20.

The three Israeli firms on the list continue to climb or maintain their respective positions in the rankings: Elbit Systems rose from 31st to 30th place; Israel Aerospace Industries from 41st to 37th; and Rafael Advanced Defense Systems remained at 44th.

The annual Defense News Top 100 list relies heavily on self-reporting from companies, many of whom provide estimates rather than definitive data for their defense percentages. That means that while the list is the industry standard, the numbers come with some variance.

The global economy contracted by 3.5 percent in 2020, according to the International Monetary Fund. But what struck Grundman most about this year’s Top 100 list is how well the companies seem to have weathered the unprecedented plunge in production of commercial aircraft.

“On average, these Top 100 companies derive about as much revenue from customers outside the defense sector as they do from their ministries of defense, a balance that no doubt played a big part in helping firms in the supply chain of commercial aircraft avoid financial crisis,” he said. “Defense companies in the aggregate tend to be more diversified than we might think when focusing only on the top tier, and 2020 showed why that matters to the overall health of [the aerospace and defense sector].”

Boeing, which was caught in the commercial-side downdraft, recorded a 6 percent drop in defense revenues for the list, which combines several segments. Of those, its annual report says revenues from its Defense, Space and Security segment grew slightly, while revenues for Global Services, which serves defense customers but depends heavily on commercial airlines, fell $2.9 billion. 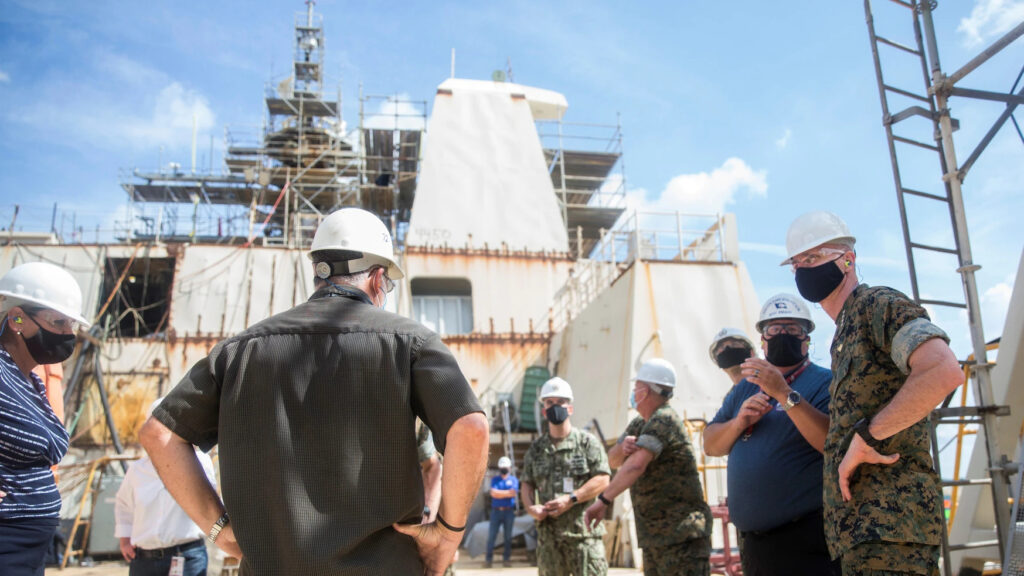 Assistant Commandant of the Marine Corps Gen. Gary Thomas receives a tour of the Huntington Ingalls Industries shipyard in Pescagola, Miss., on Aug. 13, 2020. He was assessing capabilities and production of multiple Navy and Marine Corps projects during the novel coronavirus pandemic.
(Sgt. Wesley Timm/U.S. Marine Corps)

To Greenwalt, the overall numbers suggest the defense industry in European countries, despite increased defense budgets, were hit harder by COVID-19′s effects and resulting lockdowns — with the exception of Kongsberg Gruppen and Fincantieri, which had major work tied to the U.S.

“It varied from state to state and even region to region within the U.S. I would say, though, that the defense industry did pretty well compared with other segments of the economy,” said analyst Roman Schweizer, managing director of the Washington Research Group at investment firm Cowen.

“It was a mixed bag in terms of how companies were affected by COVID. Government workspaces were closed,” the aerospace and defense expert explained. “Shipbuilding was impacted, and Lockheed Martin and F-35 production. So I think it ebbed and flowed, and some companies dealt with it better than others.”

Northrop Grumman held steady at No. 4 but saw a 10 percent jump in defense revenue. Northrop and Lockheed are each viewed as well positioned with respect to the Pentagon’s priorities, particularly in the areas of space, missile defense, nuclear modernization and hypersonic weapons.

“We’re in this generational shift from 20 years of counterterrorism operations in the Middle East and North Africa to peer conflict, and so it really is a big shift in demand,” Schweizer said. “And there’s a technological shift right now, with entirely new space capabilities, new classes of weapons and modernizing the nuclear triad. Northrop has two-thirds of that, and that’s going to get a massive investment over the next 20 years.” 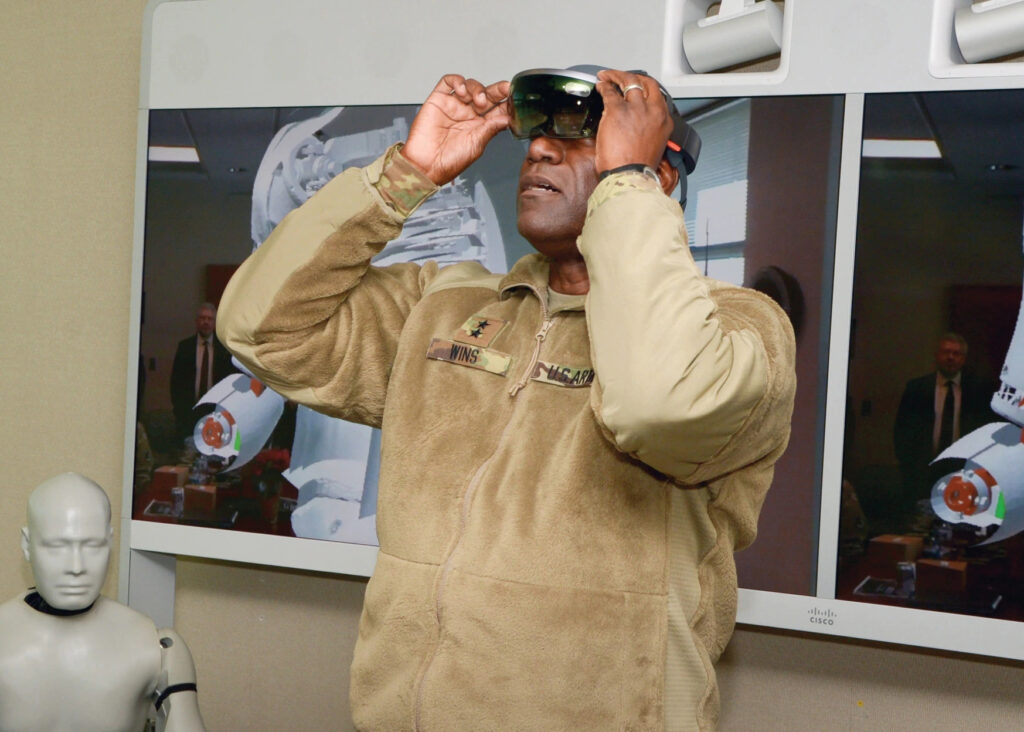 U.S. Army Maj. Gen. Cedric Wins tries out the HoloLens, Microsoft’s advanced holographic glasses. Some companies, like Amazon and Microsoft, either actively opted not to participate in the Defense News Top 100 or did not respond to requests for data. (Conrad Johnson/U.S. Army)

Defense revenue at L3Harris Technologies, formed by the merger of L3 Technologies and Harris Corporation in 2019, grew by 2 percent from FY19 to FY20. However, it maintained its spot at No. 9, and industry observers said it will be a firm to watch. “The existing businesses are very healthy, and they’re moving into space, unmanned and some other areas, so that could be the next big grower,” Schweizer said.

Seven companies increased their defense revenue by $1 billion or more, with Lockheed leading. Among them, Amentum jumped to No. 23. The company acquired global services provider DynCorp International in November 2020. (In January 2020, AECOM completed the sale of its Management Services business to affiliates of Lindsay Goldberg and American Securities LLC, who created the new entity Amentum.)

Leidos jumped to No. 19. It acquired Dynetics, a research and national security solutions provider, in January 2020.

For Japanese firms, defense revenue numbers reflect awards made by the Japanese Defense Ministry, which leads to more year-over-year volatility.

While major deals are on the horizon for defense-related cloud computing and enterprise software, some of the major competitors, such as Amazon and Microsoft, either opted not to participate in the Defense News Top 100 or did not respond to requests for data. Observers speculate that some companies don’t want to advertise their participation because it’s unpopular with their workers or shareholders.

“These guys are committed to doing the good of the nation, as well as individuals, and yet the internal workforce seems to have a strong bias [against defense]. So I think that they are treading a very fine line,” said Goure of the Lexington Institute.

“We’re talking about 500 defense clouds and deals like JEDI that was going to be $10 billion,” he added, referring to the Pentagon’s Joint Enterprise Defense Infrastructure cloud contract. Microsoft won that contract in 2019, and Amazon Web Services contested the award. However, the Defense Department announced July 6 that is canceled the JEDI deal, instead seeking a replacement cloud called the Joint Warfighter Cloud Capability, an indefinite-delivery, indefinite-quantity contract expected to be a multi-cloud, multivendor contract.

Goure expects cloud technology is a portion of the U.S. defense budget that will significantly grow as the Pentagon matures its Joint All-Domain Command and Control concept, in which high-bandwidth, resilient communications networks pass mass amounts of data “from the headquarters to the foxhole” to help commanders make fast decisions.

Increased U.S. military construction spending seems to have benefited players in that lane: Bechtel (No. 40) saw 35 percent revenue growth; Jacobs (No. 46) saw 18 percent growth; and Fluor Corporation (No. 82) saw 33 percent growth. “There was a lot of new money, but I would have expected COVID would have impacted construction, and it didn’t,” said Greenwalt, the former Pentagon official.

Newcomers to the list include San Diego, California-based Kratos (No. 94). The firm acquired small turbojet manufacturer Technical Directions Inc. in February 2020. Another, BWX Technologies (No. 58), makes nuclear reactors for the U.S. Navy’s Virginia- and Columbia-class submarines as well as nuclear-powered aircraft carriers — “a strong pocket that will probably grow,” Schweizer said.

Joe Gould is the Congress reporter for Defense News.  jgould@defensenews.com