The Many Faces of Regime Change in Cuba

Cubans confront a host of problems amid a national health emergency — and the Biden administrative is only adding to punitive sanctions with the intent to make everything worse. 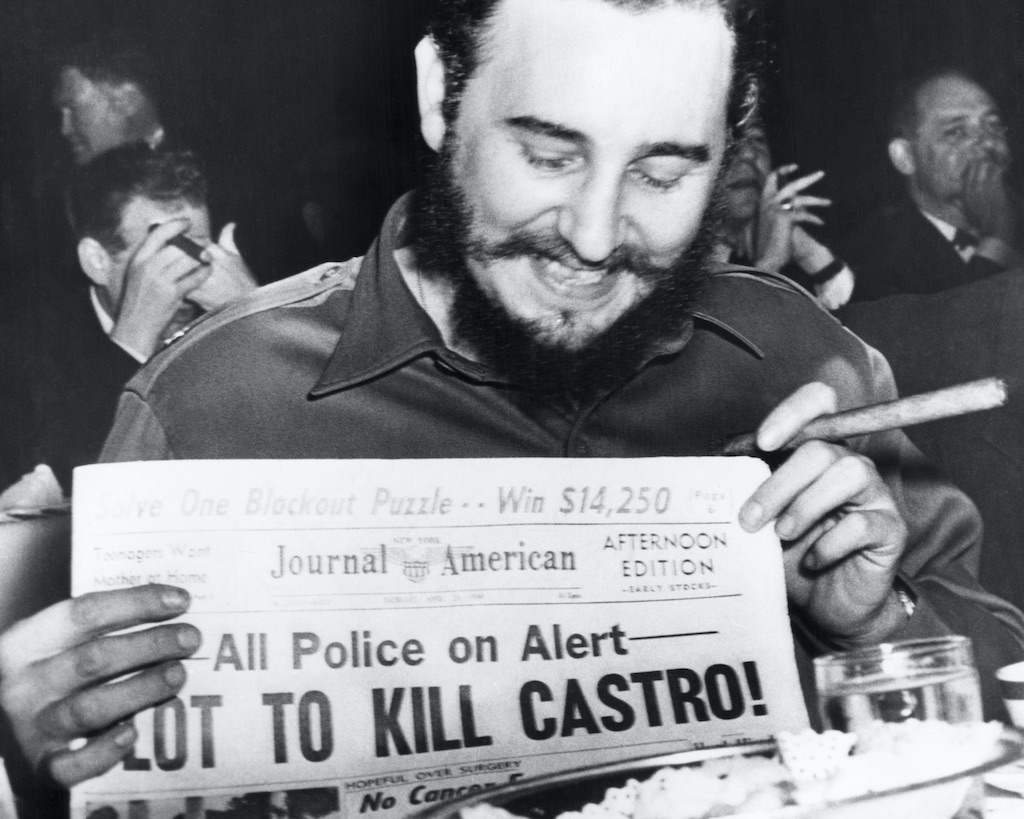 Fidel Castro holds up a newspaper headlining a plot to kill him in 1959. (Bettmann via Getty)

24 Jul 2021 – After months of casual indifference to conditions in Cuba, the Biden administration reacted with purposeful swiftness to support street protests on the island. “We stand with the Cuban people,” President Biden pronounced. A talking point was born.

“The Biden-Harris administration stands by the Cuban people,” secretary of state Antony Blinken followed. Senate Foreign Relations Committee chair Robert Menéndez also joined to emphasize “the need for the United States to continue to stand with the Cuban people.”

It is the policy of economic sanctions — the embargo — officially designated as an “economic denial program,” that gives the lie to US claims of beneficent concern for the Cuban people. Sanctions developed early into a full-blown policy protocol in pursuit of regime change, designed to deprive Cubans of needed goods and services, to induce scarcity and foment shortages, to inflict hardship and deepen adversity.

Nor should it be supposed that the Cuban people were the unintended “collateral damage” of the embargo. On the contrary, the Cuban people have been the target. Sanctions were designed from the outset to produce economic havoc as a way to foment popular discontent, to politicize hunger in the hope that, driven by despair and motivated by want, the Cuban people would rise up to topple the government.

The declassification of government records provides insight into the calculus of sanctions as a means of regime change. The “economic denial program” was planned to “weaken [the Cuban government] economically,” a State Department briefing paper explained, to “promote internal dissension; erode its internal political support . . . [and] seek to create conditions conducive to incipient rebellion.” Sanctions promised to create “the necessary preconditions for nationalist upheaval inside Cuba,” the Department of State Bureau of Intelligence and Research predicted, thereupon to produce the downfall of the Cuban government “as a result of internal stresses and in response to forces largely, if not wholly, unattributable to the U.S.”

The “only foreseeable means of alienating internal support,” the Department of State offered, “is through disenchantment and disaffection based on economic dissatisfaction and hardship. . . . Every possible means should be undertaken promptly to weaken the economic life of Cuba . . . [to deny] money and supplies to Cuba, to decrease monetary and real wages, to bring about hunger, desperation and overthrow of government.”

The embargo has remained in place for more than sixty years. At times expanded, at other times contracted. But never lifted. The degree to which US sanctions are implicated in current protest demonstrations in Cuba is a matter of debate, of course. But that the embargo has contributed — to a greater or lesser extent — to hardship in Cuba can hardly be gainsaid; that has been its intent. And now that hardship has produced popular protests and demonstrations. That, too, is in the “playbook” of the embargo.

But the embargo has had a far more insidious impact on the political culture of Cuba. The Cuban government is not unaware of the United States’ desired policy outcomes from the sanctions. They understand well its subversive reach and interventionist thrust, and have responded accordingly, if not always consistently.

Such a nakedly hostile US policy, which has been ongoing and periodically reaffirmed over such a lengthy period of time, designed purposely to sow chaos, has in fact served Cuban authorities well, providing a readily available target that can be blamed for homegrown economic mismanagement and resource misallocation. The embargo provides a refuge for blamelessness and immunity from accountability. The tendency to attribute the consequences of ill-conceived policies to the embargo has developed into a standing master narrative of Cuban government.

But it is more complicated still. Not a few within the Cuban government view popular protests warily, seeing them as a function of US policy and its intended outcomes. It is no small irony, in fact, that the embargo has so often served to compromise the “authenticity” of popular protest, to ensure that protests are seen as acts in the service of regime change and depicted as a threat to national security.

The degree to which the political intent of the embargo is imputed to popular protest often serves to drive the official narrative. That is, protests are depicted less as an expression of domestic discontent than as an act of US subversion, instantly discrediting the legitimacy of protest and the credibility of protesters. The embargo serves to plunge Cuban politics at all levels into a Kafkaesque netherworld, where the authenticity of domestic actors is challenged and transformed into the duplicity of foreign agents. In Cuba, the popular adage warns, nothing appears to be what it seems.

Difficulties have mounted, compounding continuously over many years, for which there are few readily available remedies. An economy that reorganized itself during the late 1990s and early 2000s around tourist receipts has collapsed as a result of the pandemic. A loss of foreign exchange with ominous implications for a country that imports 70 percent of its food supplies.

The Trump administration revived the most punitive elements of US sanctions, limiting family remittances to $1,000 per quarter per person, prohibiting remittances to family members of government officials and members of the Communist Party, and prohibiting remittances in the form of donations to Cuban nationals. The Trump administration prohibited the processing of remittances through any entities on a “Cuba restricted list,” an action that resulted in Western Union ceasing its operations in Cuba in November 2020.

And as a final spiteful, gratuitous gesture, the outgoing Trump administration returned Cuba to the list of state sponsors of terrorism. At the precise moment the Cuban people were reeling from greater shortages, increased rationing, and declining services, the United States imposed a new series of sanctions. It is impossible to react in any way other than with blank incredulity to State Department spokesperson Ned Price’s comment that Cuban humanitarian needs “are profound because of not anything the United States has done.”

Cubans confront all at once a collapsing economy, diminished remittances, restricted emigration opportunities, inflation, shortages of food, scarcity of medicines, all in a time of a national health emergency — and with the United States applying punitive sanctions with the intent of making everything worse. Of course, the Cuban people have the right to peaceful protest. Of course, the Cuban government must redress Cuban grievances.

Of course, the United States must end its deadly and destructive policy of subversion.

Louis A. Pérez Jr is the J. Carlyle Sitterson Professor of History and director of the Institute for the Study of the Americas at the University of North Carolina at Chapel Hill. His most recent book is Rice in the Time of Sugar: The Political Economy of Food in Cuba (2019).