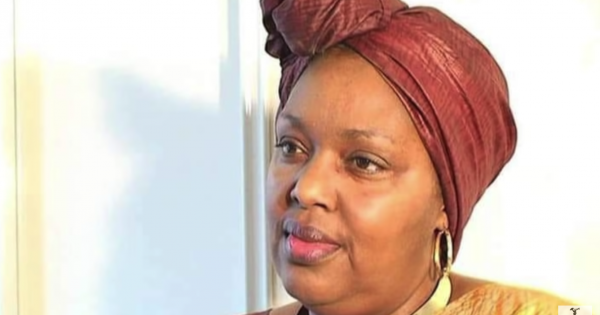 27 Jul 2021 – One of the winners of this year’s Victoire Ingabire Umuhoza Democracy and Peace Prize was Esperance Mukashema, a Tutsi survivor of the Rwandan Genocide who spoke out about the crimes of General Paul Kagame’s Rwandan Patriotic Front (RPF) army during its four year war to seize power, which ended in the 1994 genocide. General Kagame became President Kagame, and Esperance spoke out against his brutal regime after fleeing to Uganda and then The Netherlands. Last week Esperance died of COVID-19, and there was an outpouring of grief in the Rwandan community all around the world. I spoke to Marcelline Nduwamungu, a member of the Brussels-based Réseau Internacional des Femmes pour la Démocratie et la Paix, about her legacy.

Marcelline Nduwamungu: Espérance was a Rwandan lady, born in Kigali (Muhima), whose first husband was killed by an Interhamwe militia, while she had sought refuge in Gakurazo, some tens of kilometers away from Kigali. In June, when General Paul Kagame’s Rwandan Patriotic Front (RPF) army took over the town of Gitarama, part of the Rwandan clergy who had sought refuge in Kabgayi were brought to Gakurazo. That same day, in the evening, the priests together with Esperance’s son, Richard Sheja, were killed by RPF, led by Ibingira, as per Esperance’s testimony. After the war, she returned to Kigali and tried to recover her property, which had been taken away by the military elements. She later wedded Mr Evariste Sisi, who recently passed away. Realizing the new RPF regime was going bad and didn’t really give a damn about Tutsi survivors, she decided to flee the country. She stayed three years in Uganda, then moved with her family to the Netherlands where she remained until she died of COVID-19 last week.

AG: Why did she mean so much to so many Rwandans, both Hutu and Tutsi? When the news of her death came, I saw Rwandans grieving on social media and calling her “Mama Rwanda.”

MN: Esperance Mukashema was another Kizito Mihigo. They both placed a lot of hope in the new Rwandan leaders in 1994, but were deceived by their pretense of ethnic reconciliation until they saw their ruthlessness instead. Nowadays, in a gesture of ethnic solidarity, many Tutsis keep silent about the murders of their own by the RPF during and after the genocide. Kizito Mihigo, Espérance Mukashema, Aimable Karasira Uzaramba, Diane Shima Rwigara and many others are Tutsis who choose to speak out, often at risk to their lives. For true reconciliation among Rwandans, we need fearless people like Espérance Mukashema who don’t stick to their ethnicity no matter what, but of course the Rwandan regime doesn’t like such people. It claims to the outside world that it has removed ethnicity from Rwandan society, but in fact it wants Tutsis to repeat over and over that they were saved by the RPF and forget whatever wrong the regime did to them.

AG: General, now President Paul Kagame, never stops telling us that he and the RPF were fighting to stop Tutsi genocide. Why did they kill Esperance Mukashema’s son and other Tutsis?

MN: I personally think the RPF used the massacres of the Tutsis to justify seizing power and hold on to it. Otherwise, I can’t sense how and why it (RPF) is terrorizing, even killing Tutsi genocide survivors.

Mukashema’s son died along with those members of Catholic clergy, Hutus and Tutsis alike. He was in the wrong place at the wrong time, but RPF had already proven that it could kill anyone deemed dangerous to them. It is often said that Mr Landouald Ndasingwa, brother to Louise Mushikiwabo, a high official in the current government, was likely killed by RPF elements. For the legitimation of its rule, RPF uses its false narrative that it saved Tutsis and expects them to be thankful for that and disregard all the rest. But more and more Tutsis, like Espérance Mukashema, refuse to repeat that narrative. Thirty years of power are enough to show the weaknesses and wickedness of the Kagame regime.

AG: Several years ago I wrote a report, Wikileaks: Rwandan Reconciliation Is a Lie, about the diplomatic cable “ETHNICITY IN RWANDA – – -WHO GOVERNS THE COUNTRY?,“

2. (C/NF) Post analyzed 118 senior positions in the government, from ministries to parastatals to independent regulatory bodies, as well as the defense and security establishments to assess the ethnic composition of the current Rwandan government (GOR). Post’s review of ethnic membership showed two thirds of the senior positions are occupied by Tutsis — including ministers, ministers of state and secretaries general in the various ministries, the heads of the armed services and security services, and the heads of dozens of government offices. This according of senior positions has held steady over time — Post has reviewed internal embassy surveys of ethnic breakdowns of senior positions from several years ago and found a similar two-thirds/one-third breakdown. These percentages are far different from the ethnic breakdown commonly accepted for the two groups, at 15 percent Tutsi and 85 percent Hutu (Twas are normally accorded one percent or less of the population).

Some senior Tutsi officials privately assert that the Tutsi population, whose official size was suppressed during the Hutu-power Habyarimana era, is growing as a percentage of the population, but there is no statistical analysis to support this.

It Starts at the Top: Powerful Tutsis, Secondary Hutus

3. (C/NF) President Kagame is a Tutsi. So, too are the important Ministers of Finance, Foreign Affairs, Justice, Infrastructure, Local Government, and Information. Close Kagame confidant, Chief of Defense Staff General James Kabarebe, is Tutsi, as are the chiefs of the army and air force, the military district commanders, and the heads of the Rwanda National Police and the National Security Service (although some Rwandans joke that short-statured Air Force Chief Muhire is Twa). Indeed, all are English speakers who grew up in Uganda. Some major positions are held by Hutus, but their actual authority often appears limited, and they are widely perceived to be “twinned” with more powerful Tutsi colleagues.

AG: If this is true, why do you say that Esperance realized Kagame’s government didn’t give a damn about Tutsi survivors? Don’t members of Ibuka, the Tutsi survivors group, have special privileges?

MN: Ibuka and other survivors’ organizations have been swallowed by the regime and can’t do anything but praise and follow the regime’s line. You can see that when a Tutsi survivor takes some distance from the regime: Kizito Mihigo, Assinapol Rwigara, the remaining Rwigara Family, Yvonne Idamange, Aimable Karasira Uzaramba. All of a sudden, they all lose the privilege of being called “genocide survivors.” It’s even surprising to see Ibuka is headed by a Rwandan who was in France during the genocide and who claims to be more of a survivor than those who witnessed the horror. Loyal Ibuka members will still have their privileges but will remain mute when it comes to killing or imprisoning survivors who speak out against the regime.

MN: That happens between 7th April and 4th July, the genocide months of 1994. Hutus are compelled to perform different kinds of service towards Tutsi survivors: that ranges from agricultural work, offering cows and clothes, or gathering a certain sum of money that will be distributed to Tutsi survivors. This happens even though the Rwandan government decided to remove ethnicity references from IDs, and even though anyone referring to ethnic groups is severely punished for “divisionism.” When it comes to genocide, everybody knows who is who!

All that is meant to dehumanize Hutus and make all them feel guilty for the genocide. At the same time, we know that the Interahamwe militias who committed the Tutsi genocide were composed of both Hutus and Tutsis. Tutsis in the Interahamwe were sacrificing their fellow Tutsis to create an excuse for Kagame’s brutal minority rule  And RPF has never apologized for the many documented crimes that it committed towards the Hutu population, in Rwanda and in the DRC. The UN Mapping Report on the Democratic Republic of Congo, 1993 to 2003 said there is enough evidence to convict Kagame and the RPF of genocide in Congo. The Rwandan regime is determined that the victor’s truth prevail, nothing else, because they don’t want to answer for their crimes.

AG: Didn’t Esperance produce a podcast? Tell us about that.

MN: Yes. Together with friends, she started Inyenyeri News and later founded her own Youtube channel and radio show. She called it Ubumwu, meaning togetherness. She dreamed of unity among Rwandan people to get rid of the brutal Rwandan regime.

AG: Is there anything else you’d like to say about Esperance Mukashema?

MN: I first met her in 2008. At that time, there were NGOs who had initiated dialogue among Rwandans to find sustainable solutions to Rwandan problems, especially to make it possible for Hutus and Tutsis to come together in peace. Some members of our women’s group of Hutus and Tutsis had gathered in Barcelona to bring along our contribution, and she was there as well.

Esperance and I last met in person in 2019, when Judi Rever came to Belgium for the presentation of her book “In Praise of Blood: Crimes of the Rwandan Patriotic Front.”