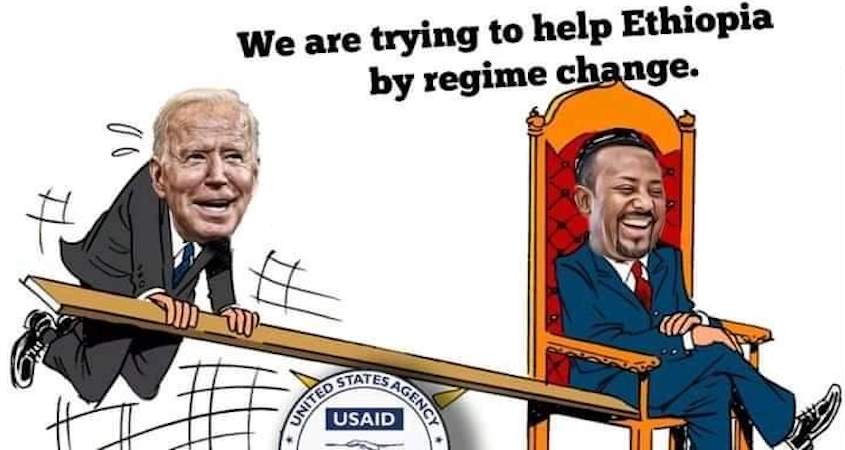 22 Sep 2021 – The U.S. is once again attempting to overthrow a legitimate head of state in Africa, this time in Ethiopia, where they want to put their old puppet, the TPLF, or a new one, in power.

President Joe Biden has issued an executive order threatening to impose new US sanctions on Ethiopia and Eritrea for their roles in humanitarian crisis caused by the war in Ethiopia’s northern regions.

Unilateral sanctions, meaning sanctions not approved by the UN Security Council, violate international law codified in the UN Charter. However, Biden wrote, “This order is not intended to, and does not, create any right or benefit, substantive or procedural, enforceable at law or in equity by any party against the United States, its departments, agencies, or entities, its officers, employees, or agents, or any other person.”

In other words, the US writes its own laws, just as it imposes its own sanctions. Unilaterally.

In one bizarre paragraph, Biden describes Ethiopia’s conflict as a “national security threat”:

“I, JOSEPH R. BIDEN JR., President of the United States of America, find that the situation in and in relation to northern Ethiopia, which has been marked by activities that threaten the peace, security, and stability of Ethiopia and the greater Horn of Africa region — in particular, widespread violence, atrocities, and serious human rights abuse, including those involving ethnic-based violence, rape and other forms of gender-based violence, and obstruction of humanitarian operations — constitutes an unusual and extraordinary threat to the national security and foreign policy of the United States. I hereby declare a national emergency to deal with that threat.”

He’s wrong of course. Americans don’t wake up worrying about Ethiopian conflict. Many wake up wishing they didn’t have to go to that damn demeaning job another day, and/or wondering what pro sports they might enjoy afterwards. Many more wake up full of anxiety about medical debt, college debt, eviction, foreclosure, and poverty. Next to none will read Biden’s executive order and most couldn’t find Ethiopia on a map, thanks to the savage state of American education. Some, especially those who’ve been watching mass atrocity TV, might be persuaded by Biden’s invocation of  “The White Man’s Burden ”:

Take up the White Man’s burden–
The savage wars of peace–
Fill full the mouth of Famine
And bid the sickness cease;
And when your goal is nearest
The end for others sought,
Watch sloth and heathen Folly
Bring all your hopes to nought.

“Famine” is the Ethiopian emergency that US AID Chief Samantha Power has been shrieking about most for nearly a year. The Ethiopian government, she says, is blocking food aid into war-torn Tigray. Never mind that the Tigray People’s Liberation Front, a US puppet for nearly 30 years, started the war that’s causing the suffering, as war always does. Or, that the Ethiopian government says that they wouldn’t starve their own people, that they are delivering more food to Tigray than any of the Western NGOs, but that they have set up checkpoints to make sure that aid convoys aren’t transporting arms to the TPLF. Power, like Blinken and Biden, don’t call the Ethiopian government’s account of facts on the ground a lie. They just ignore it, as do other Western officials and press.

Previous US and EU sanctions have targeted individual officials or military officers for their roles in the Ethiopian conflict, but in his most recent order, Biden threatens to sanction governments, political parties, or military or security forces that he deems to be prolonging the conflict or abusing human rights. The worst of such sanctions can block a nation’s access to medical supplies and food, as has been done to Iraq, Cuba, and Venezuela, or the freezing of a nation’s assets in foreign banks, as has been done to Libya, Venezuela, and now Afghanistan.

Time will tell whether the US and its allies will go to such extremes to control the Horn of Africa, but President Biden has heightened the threats. Ethiopian Prime Minister Abiy Ahmed wrote an open letter in response, asking him to respect Ethiopia’s sovereignty, but Biden has not responded, and the letter has not been published by Western press.

Here is Prime Minister Abiy Ahmed’s open letter to Joe Biden, which he first published on his Twitter page .