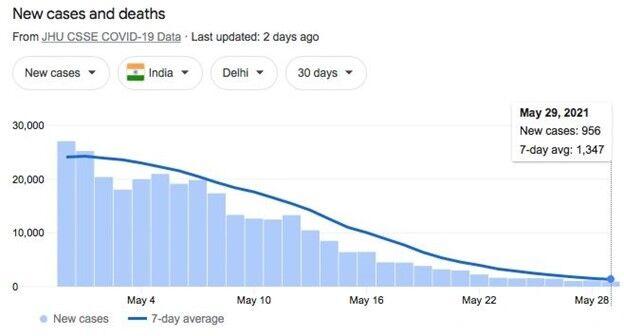 1 Jun 2021 – A 97% decline in Delhi cases with Ivermectin is decisive – period. It represents the last word in an epic struggle to save lives and preserve human rights. This graph symbolizes the victory of reason over corruption, good over evil, and right over wrong. It is as significant as David’s victory over Goliath. It is an absolute vindication of Ivermectin and early outpatient treatment. It is a clear refutation of the WHO, FDA, NIH, and CDC’s policies of “wait at home until you turn blue” before you get treatment.

Dr. Pierre Kory told the world on December 8, 2020, that Ivermectin “obliterates” this virus. Obliterate means to decimate, demolish, or annihilate. It means to eliminate or destroy all trace, indication, or significance.

This graph shows that Ivermectin, used in Delhi beginning April 20, obliterated their COVID crisis. No one should be able to talk you out of this – not a salesman, a drug company, a television celebrity doc, and certainly not the top doctor for the WHO or the NIH who is paid to do that.

Will you believe this 97% eradication graph, or will you believe the propaganda pitched by the Big Media, Big Pharma, the WHO, and the FDA, who share massive financial conflicts of interest – those who say there is insufficient evidence?

What evidence could be any clearer than a 97% reduction in five weeks? That number is better than the current vaccines and beyond the reach of most medicines.

The WHO cautioned India they were making a mistake by using Ivermectin. They told them it could be dangerous, that there was no evidence it worked. How many lies will you buy before you stand up for the truth?

The fatal mistake would have been to NOT use Ivermectin.

Mercifully they used it, and they saved Delhi. But tragically, Tamil Nadu did not, and their state was devastated. Their new cases rose from 10,986 to 36,184 – a tripling.

No one can hide that. Their refusal to use Ivermectin harmed them. Not only did Tamil Nadu’s cases rise to the highest in India, but their deaths skyrocketed from 48 on April 20 to 474 on May 27 – a rise of ten-fold.

Meanwhile, Delhi’s deaths IN THE SAME PERIOD fell from 277 to 117. So which advice would you have wanted your state to follow?

That protocol has since been revised by Dr. George Fareed and his dynamic associate,  Dr. Brian Tyson. They have now saved 6,000 COVID patients in California’s Imperial Valley.

Less than one month later, Dr. Pierre Kory sounded the alarm for a second time on December 8, 2020, to the US Senate. He advised the use of Ivermectin, yet no one listened. No Ivermectin guidelines were instituted. On December 8, the US suffered 2,821 COVID deaths. With Ivermectin, cases could have been quickly crushed. Fatalities would have dropped in short order, as the example of Delhi shows us.

But instead, the United States followed the WHO and FDA’s official advice and waited for the vaccines. They sat on their hands while people gasped. They watched and did nothing as millions turned blue and flooded the hospitals – no Ivermectin approval. So like Tamil Nadu, our US cases and deaths also skyrocketed.

By January 8, just four weeks later, US daily cases had risen from 219,000 to 300,000, and deaths were up from 2,821 to 3,895. Even more Americans were to die due to this failed health policy of ignoring Ivermectin and early outpatient treatment.

Delhi did it right. The United States and Tamil Nadu did it wrong. It cost half a million precious lives and horrific pain and suffering for the world. The pandemic was prolonged for no good reason.

Now we are in a different position. We as a people have absolute evidence of Ivermectin’s efficacy. In Delhi, we heard not one single story of Ivermectin being toxic or causing any difficulty. On the contrary, it is safe, and it saved tens of thousands from COVID.

But more immediately, what can we do now? What will you do as a concerned citizen to get the word out? What can you do to save your fellow human beings from repeating these costly errors? Start with sharing the book, Ivermectin for the World, with your church, your minister, and all your social contacts. Then, spread the word far and wide:

People can safely take Ivermectin to prevent and treat COVID-19.

The rest of the world must hear about Ivermectin as new areas experience similar surges. A new hybrid variant is brewing in Vietnam. Notify them! They need to know there is more than masks and social distancing. There is more than waiting for vaccines. Ivermectin is effective against ALL the variants. The vaccines ARE NOT.

But, unfortunately, the authorities will continue to censor this information; thus, the responsibility of getting the word out rests squarely upon the citizens of the planet, you and me.

Lead a peaceful protest. Share this article with everyone you know, your social media, your email contacts, relatives, friends, and co-workers. You may think that none of this applies to you because you have already been vaccinated. That is unfortunately not true.

Listen to Dr. Peter McCullough on this subject. He is the Vice-Chair of Medicine at Baylor University Medical Center in Dallas, Texas. He is among the most published cardiologists in the world.  He is arguably the most courageous physician to speak out.

We sounded the alarm. The All India Institute for Medical Science (AIIMS) and the Indian Council of Medical Research (ICMR) had the guts to listen. They listened to the 56 studies involving 18,447 patients showing up to a 91% reduction in death with Ivermectin. They listened to scientists like Dr. Pierre Kory and the FLCCC. They listened to world-class experts like Dr. Tess Lawrie of the BIRD group and Dr. Peter McCullough of the C19 group. They were smart.

The book Ivermectin for the World was released May 1, 2021, and called for the urgent adoption of Ivermectin by India on a humanitarian basis to save lives. “What we could not do for America, we can do for India!” was our mantra. And we did!

This is what happened to cases in the areas that chose Ivermectin:

Observe what happened to those areas that DID NOT choose Ivermectin:

On May 3, the FLCCC and the BIRD groups issued a press release and called for the immediate global use of Ivermectin for COVID-19.  On May 7, Dr. Paul Marik, the second most published Intensive Care Specialist in the world and founding member of the FLCCC, did the same. He added that we could no longer trust “larger health authorities to make an honest examination of the medical and scientific evidence.”

In India, the acid test was to compare the fates of those Indian areas that adopted the drug versus those that did not. This would be the ultimate natural experiment. Finally, the plain truth would be revealed to all the world. It was no longer the special interests, Big Pharma, Big Regulators, and Big Media, who had been censoring, swindling, and conniving. Now the fight would be fair because all the money in the world could not conceal the cases in Delhi. The world had a front-row seat to witness these results. And it bears repeating; the results are in.

I suggest you believe the scientists from non-profit groups like FLCCC and BIRD who have nothing to gain except saving your life. They are the most trustworthy. You can support Dr. Tess Lawrie’s charitable work at:

You can support Dr. Pierre Kory’s charitable work on:

Dr. Fareed is a former NIH scientist and Harvard Professor. He holds patents on three cancer drugs. He was named the 2015 California Rural Physician of the Year, and he won the Plessner Memorial Award given by the California Medical Association for his ethics and clinical excellence. So, you can trust and believe Dr. Fareed.

The choice is clear. Ivermectin is the safe, repurposed Nobel Prize-Winning drug that effectively reduces death up to 91% from COVID-19.  It does not produce blood clots, heart attacks, or strokes. It does not cause violent immune reactions. And it reduced the COVID-19 cases in Delhi, India, by an astonishing 97% in five weeks. It costs pennies.

Tell the poor citizens of Tamil Nadu who are still in the dark and remain forbidden from using it. Tell the rest of the world. Show your doctor the studies. They are updated daily on www.ivmmeta.com. If your doctor refuses, find another doctor.

Listen to scientists and physicians who are driven by their Hippocratic Oaths to do what is right, not the doctors who are paid vast sums of money by lucrative interests to tow the party line.

So the next time you hear a highly paid doctor advising you that Ivermectin does not work, or you read another article disputing this, please believe your eyes and this graph.

Use your common sense.  Some truths are self-evident, and Ivermectin’s pronounced effect against this virus is one of them. Another self-evident truth, straight from the Declaration of Independence, is the human right to life – which includes the right to select medical treatment – free from governmental interference.

We do not require scientists to interpret these fundamental truths. We do not need a philosopher to know that censorship of life-saving information is wrong.  We do not require any more “studies” to understand that all the world needs Ivermectin – immediately.

“What we did for India, we must now do for the rest of the world!”

Dr. Justus R. Hope, writer’s pseudonym, graduated summa cum laude from Wabash College where he was named a Lilly Scholar. He attended Baylor College of Medicine where he was awarded the M.D. degree, completed a residency in Physical Medicine & Rehabilitation at The University of California Irvine Medical Center, is board-certified and has taught at The University of California Davis Medical Center in the departments of Family Practice and Physical Medicine & Rehabilitation. He has practiced medicine for over 35 years and maintains a private practice in Northern California. Book: Surviving Cancer, COVID-19, and Disease: The Repurposed Drug Revolution–How does a trained physician beat terminal cancer when he, himself, gets it?