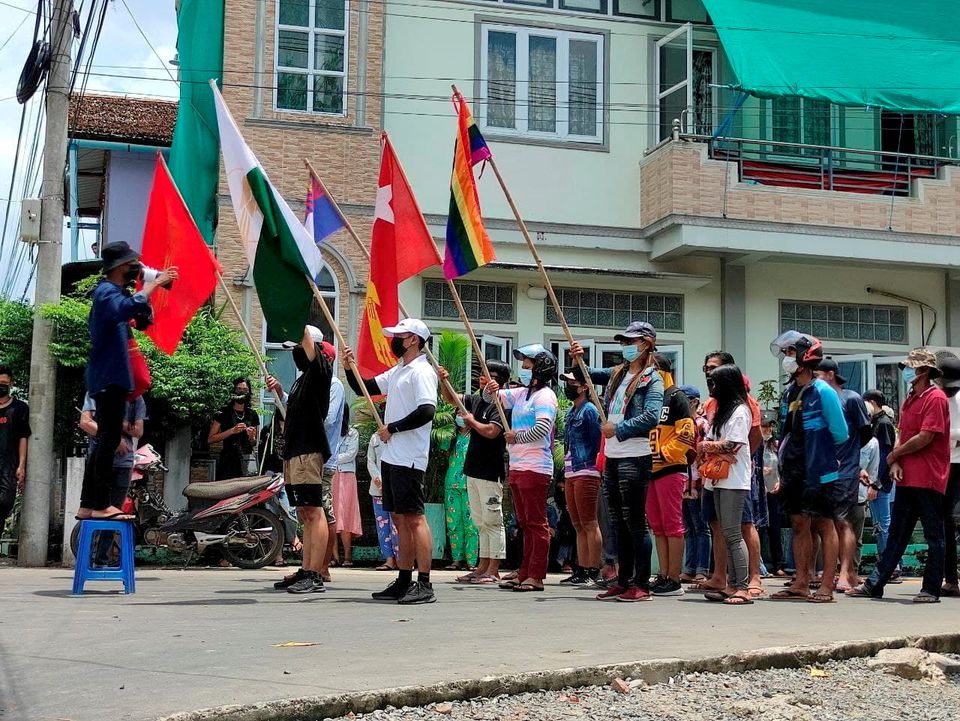 Demonstrators carry flags during a protest against the military coup, in Dawei, Myanmar, April 27, 2021. Courtesy of Dawei Watch/via REUTERS//File Photo

21 Oct 2021 – Myanmar has spiraled into civil war following a military coup, the outgoing U.N. special envoy on Myanmar said today, warning that the chance to return to democracy is disappearing and signaling that further targeted sanctions could be helpful.

Christine Schraner Burgener, who is stepping down after more than three-and-a-half years in the role, told the U.N. General Assembly in June that there was a real risk of large-scale civil war after the military seized power on Feb. 1, detaining Aung San Suu Kyi and other elected government leaders.

When asked on Thursday if there was now a civil war, she said: “In the international law terminology we use internal armed conflict and I would use this terminology now.”

She said it was “very important” that governments and the United Nations do not signal any acceptance of the junta and that the will of the people – who voted a year ago to elect Suu Kyi’s government – was protected.

The United Nations is faced with rival claims on who will sit in Myanmar’s seat at the world body. A decision by member states is due to be made by the end of the year on whether the junta and or current Ambassador Kyaw Moe Tun, appointed by the elected government, should represent the country in New York.

Schraner Burgener said the military had “no interest in compromise or in a dialogue” and that “the opportunity to help put Myanmar back on the path to democracy, democratic reform is narrowing and therefore I urge the member states to act.”

The United States, Britain and others have imposed sanctions on the military rulers for the coup and repression of pro-democracy protests in which hundreds have been killed. Schraner Burgener suggested that if more states also imposed targeted measures that could have an effect.

She said her assessment was that the people of Myanmar would continue to resist the coup and many were writing to her: “We would rather like to die than to accept a new military dictatorship.”