Washington Always Looking for another War

23 Oct 2021 – It didn’t take long for the US to up the ante with China and Russia. So soon after the crushing defeat from 20 years of death and destruction in Afghanistan we find Washington stirring the fire pit and looking for more trouble.

It’s really no surprise. Just take a close look at US history – one filthy war after the other.

Just this past week we’ve seen ‘F the EU’ Victoria Nuland go to Moscow hoping for an audience with Putin. She only got to meet with lower level, but competent Russian diplomats, and came away with nothing other than furthering the divide between our two nations. Actually, that might have been the US strategy.

The word is that Nuland went in with a list of Washington’s demands. Russia said ‘nyet’ and handed Nuland a list of their own. Of course Nuland said ‘No’ and was then sent packing back to the US.

Secretary of War Lloyd Austin (former Raytheon board member) just stopped in Georgia, Ukraine, and Romania before heading to Brussels for hand-wringing with the NATO clowns.

Austin stated during a news conference in Bucharest that the purpose of these visits was to highlight “the importance of deepening cooperation among our Black Sea allies and partners to deter and defend against Russian malign activities in the region.”

That’s the political hype. His real purpose in Georgia, Ukraine, and Romania? Spur them to make trouble for Moscow in any way and every way they possibly can. And I’m sure Austin said the magic words, ‘Of course the US will back you if you get into a fight with Russia. First, we’ll supply you with more weapons and plant more of our troops in your nation to protect you from the Russian bear.’

They also characteristically took at shot at China from behind the safe walls of NATO HQ in Brussels with a stream of rhetoric.

Austin’s remarks followed the completion of a two-day NATO ministerial where he said officials offered “unique perspectives” on China, which he noted remains the Pentagon’s “primary pacing challenge.”

“Indeed, I applaud NATO’s work on China and I made it clear that the United States is committed to defending the international rules-based order which China has consistently undermined for its own interests,” Austin told reporters.

At an October 21 CNN town hall, Joe Biden was asked about China.

“I just want to make China understand that we are not going to step back, we are not going to change any of our views.” Biden said. Asked whether the US would come to Taiwan’s defense if it were attacked, he replied: “Yes, we have a commitment to do that.”

Now let’s analyze this NATO meeting and the comments on China just a bit.

First, who has Russia invaded? Since the US orchestrated coup in Ukraine in 2014 (when the Russian-ethnic people in Crimea voted to ask Russia to take them back into the federation) there has been no invasion of anyone near its borders. At the same time US-NATO has been holding war games repeatedly all along Russian borders. When Moscow has responded by holding counter-war games inside its own country Washington and Brussels have howled in condemnation. Talk about a double-standard!

And please note the words above by Austin – “I applaud NATO’s work on China” – just what does that mean?

NATO has gone global. The North Atlantic Treaty Alliance has now decided that it should be ‘defending democracy in the Pacific’. Who is the aggressor in this case? What right does NATO have to decide it is the new global cop? 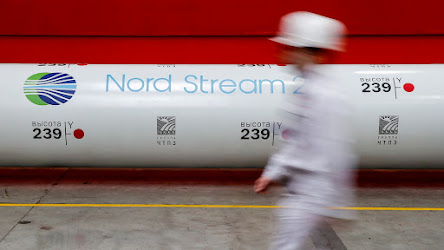 NATO has no legitimate reason to exist today – the Soviet Union and their Warsaw Pact Alliance are long gone. Russia just built an undersea natural gas pipeline called Nord Stream 2 to furnish fuel to Europe in order to help alleviate their current energy crisis. It’s a big business deal for Moscow. Why would Russia want war with Europe?

The insanity of US-NATO is exposed for anyone willing to see the obvious. Washington and Brussels got their high-tech asses kicked by a ill-armed rag-tag but determined Taliban in Afghanistan. Now they somehow dream that they can take on both China and Russia who have formed a military alliance as they watch the NATO endless war machine heading their way.

I understand that all these moves by US-NATO absolutely benefit the military industrial complex which has installed one of their agents (Lloyd Austin) as secretary of war. But do these psychopaths actually believe they can start a war with China and Russia and possibly win? Don’t they know that such a war would go nuclear in a hot flash?

It’s obvious that the US-NATO war cabal are blinded by power and greed. There can be no other explanation that comes close to making sense.

It’s a dangerous and dirty game these fat cats are playing – at the same time that climate crisis rages in our faces, legions of people face evictions from their homes, and the basic cost of living goes sky high.

Are we heading for a collapse in the US and around the globe? How could that not be happening under these present conditions?

And the US-NATO response?

How about another war?

Which party in Washington is leading this descent into hell?