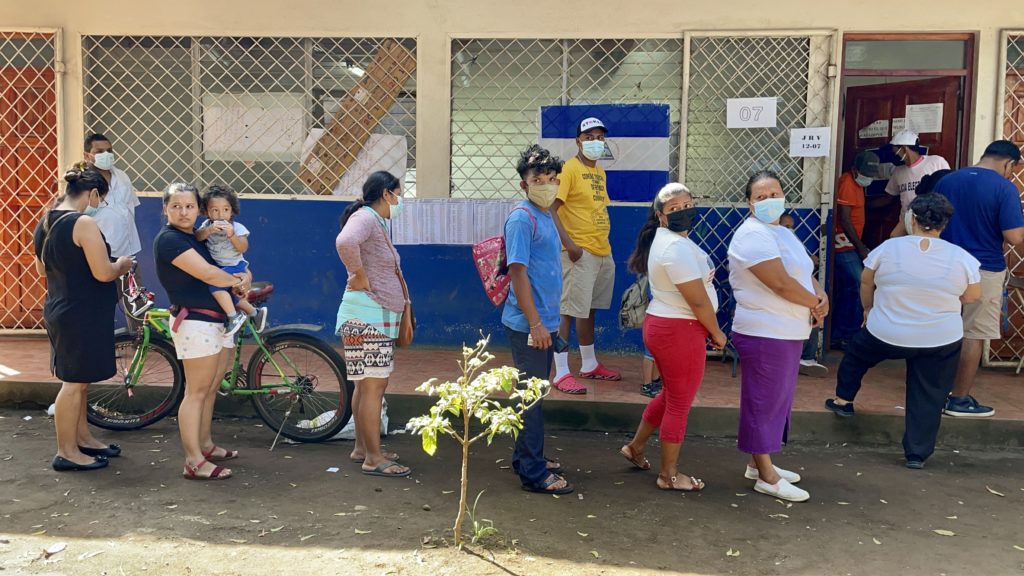 Many Nicaraguans expressed support for their country’s voting process on November 7 as 2.8 million people cast their votes for as many as 6 national parties. Credit: Julie Varughese

An acronym for the “Reinforcing Nicaragua’s Adherence to Conditions for Electoral Reform Act of 2021,” RENACER slaps sanctions on Ortega government officials, attempts to restrict multilateral financing to Nicaragua, monitors Nicaragua’s relationship with Russia, punishes the country for alleged human-rights violations and targets reported corruption inside Nicaragua, among other items.

Then on November 12, 25 member states of the Organization of American States’ (OAS) Permanent Council voted in favor of a resolution that criticized the elections as not free and fair and urged further action.

The OAS resolution and fresh U.S. sanctions, as well as social media platforms suspending known Ortega supporters a week before the elections and corporate media outlets inaccurately reporting on Ortega make clear the United States is the primary contradiction in the Nicaraguan people’s struggle for liberation.

Ortega, a militant in the Frente Sandinista de Liberación Nacional (the Sandinista National Liberation Front, or FSLN for short), was first elected president in 1984. His defeat in 1989 to neoliberal Violeta Chamorro, a scion of the landowning class, kicked off 16 years of neoliberal rule. During that time, Sandinista reforms were rolled back and social outcomes plummetted. That is why the era from 1990 to 2006 is referred to as the Neoliberal Period.

When Ortega was re-elected in 2006, the maternal mortality rate—a key marker of a country’s well-being–was 92.8 deaths per 100,000 live births. By 2020, that number dropped 60 percent to 37.5 deaths per 100,000 live births because of programs that include “maternity homes” to monitor pregnant women close to their due date. Other improvements include a 41 percent decrease in poverty, 100 percent electrification, 100 percent mobile-phone access, 85 percent internet accessibility, as well as a 100 percent increase in the amount of renewable energy the state generates. A free-trade zone employs 120,000 Nicaraguans, who work for foreign companies. Those corporations are required to abide by Nicaragua’s laws as well as respect the environment and workers’ rights. All of this means few people leave the country, but many have arrived from neighboring neoliberal Honduras.

Victoriano Potosme once labored under the orders of “latifundistas,” white plantation owners in Nicaragua.

“We were slaves under them,” he said while standing on his mountaintop farm in San José de los Rios in Ticuantepe, about an hour from the capital of Managua. There, he and his family grow award-winning fruits and have developed an internationally acclaimed organic fertilizer called BIO Buena Vista.

For campesinos like Potosme, the November 7 elections were critical. After the Sandinista Revolution, peasants like Potosme were able to own the land they worked because of reforms that put 235,000 acres into their hands.

“If we go back to the neoliberal period, it would take us back 150 years,” he said a few days before casting his ballot.

Biden released a statement on Election Day, citing the Inter-American Democratic Charter as justification for intervening in Nicaragua’s affairs. That charter was adopted on September 11, 2001, by the Organization of American States (OAS), a multilateral body the United States slapped together in the early 20th century as part of its efforts to control the Western Hemisphere. Per the Monroe Doctrine, the United States considers the rest of the hemisphere its “backyard.” After years of dormancy, that colonial term re-emerged during the Trump administration.

Then after the election, the OAS also chimed in.

“We reject the results of the illegitimate elections in #Nicaragua,” tweeted OAS Secretary General Luis Almagro. “I urge countries of the OAS to respond to this clear violation of the Democratic Charter during its #OASassembly.”

We reject the results of the illegitimate elections in #Nicaragua.

I urge countries of the OAS to respond to this clear violation of the Democratic Charter during its #OASassembly.

Report of the Secretariat for Strengthening of Democracy: @Almagro_OEA2015 https://t.co/8CBUz303Dp

The OAS General Assembly held its 51st regular session this past week in Guatemala. The organization could not be reached for comment as of press time.

But numerous commentators have pointed out the hypocrisy of the United States and the OAS using terms like “democracy,” “self-determination” and “rights.”

Black Alliance for Peace (BAP) National Organizer Ajamu Baraka, who has taught U.S. history in universities, recently wrote an analysis in which he said all settler-colonial states like the United States have criminality at their core because they were born out of “systematic, terroristic and genocidal violence against Indigenous populations.” The United States now is the largest empire in recorded human history.

“Democracy and human rights are no more than ideological props to obscure the real interests and intentions of the rulers and to build domestic support for whatever criminal activity the state has embarked on,” Baraka went on to write. (Full disclosure: This reporter coordinates a wing of BAP.)

“They are going to kill all the farmers, who dedicate themselves on a daily basis to life, to building, to working the land,” Jhaniors, a youth organizer in the Managua department, told a journalist who traveled with this reporter on a recent Friends of the ATC delegation. “The sanctions don’t help—they kill.”

Today Biden signed the “RENACER ACT” that sanctions the Nicaragua gov’t. Sanctions kill ppl. Over 40,000 ppl died from sanctions in Venezuela. How is sanctioning Nicaragua going to help the ppl?

Listen to Jhaniors, a youth organizer in Nicaragua speak on how sanctions will hurt: pic.twitter.com/iPU393viuH

Potosme’s son, Saul, said when the U.S.-funded, right-wing attempt at a coup took place in 2018, his family lost out on the opportunity to sell 30,000 to 40,000 pineapples. Participants in the attempted coup had blocked the path for trade to take place unless farmers paid up.

“We had no way of sustaining our families,” Saul said as he handled a bottle of his family’s award-winning organic fertilizer, BIO Buena Vista. “Many farmers here within this community rose up to get rid of the golpistas because we were sick of the coup attempt.”

The farmers traveled an hour to Managua to confront the coupmongers.

“It was a hard fight,” Saul said. “The reality is farmers are the ones who sustain a nation.”

After the coup attempt, the Ortega government implemented a program to create alternative ways for Nicaraguan farmers, young people, and women start and sustain businesses.

In the run-up to Election Day, U.S. Secretary of State Antony Blinken denounced the “sham of an election.” Then major social-media platforms like Facebook and Twitter disappeared the accounts of pro-Sandinista activists a week before the elections.

Despite the saber-rattling and repression, more than 2.8 million Nicaraguans cast votes in a process that appeared more organized than what this reporter has witnessed in various jurisdictions in the United States. Nicaraguans took between five and 10 minutes to vote, while U.S. voters have had to stand on lines in the sweltering sun for as long as 11 hours, as seen during the 2020 presidential election. While U.S. voters must figure out how to get to the polls between long commutes, jobs and other obligations, Nicaraguans are given the day off. Plus, Nicaraguan college students get a week off to travel to their home departments to vote.

Some people are confused about how many parties/alliances are competing in Nicaragua's elections today:

There are 7 options in total, but 1 party is regional, only in the Caribbean Coast (which has autonomy)

Ballot on the left is from the coast (7)
On the right is national (6) pic.twitter.com/Ac9SwQFpDv

Support for Ortega’s party, the FSLN, was overwhelming on Election Day, resulting in an almost 76 percent victory, with 65 percent of people voting.

“I voted for Commandante Daniel Ortega for the benefit of the community,” said Raul Navarretto, 64, as he walked out of a voting center in Chinandega, a Sandinista stronghold three hours north of the capital of Managua.

Nineteen-year-old Arlen Rueda, who strolled a toddler out of a voting center, also voted for Ortega, saying she supported the government’s efforts to provide food to its population, among other endeavors.

Armando Casa Y Padilla, 75, would not divulge to this reporter for whom he voted. “Es una secreta.” Yet, he valued the voting process. “Only people can make democracy happen.”

There is so much propaganda and fake news in the corporate media trying to discredit Nicaragua's elections. I visited 4 voting centers, and there were a lot of people voting in a very efficient, quick, and transparent process.

Election night, Sandinistas inundate the streets to celebrate the victoria of the FSLN. Here they celebrate as the preliminary results come in. pic.twitter.com/6C3KB6fSgC

While the corporate media spoke of Nicaraguan candidates and journalists being thrown in jail, the only people who were actually detained include “criminals, drug traffickers and golpistas,” according to Fausto Torrez, who handles international relations for the Associación de Trabajadores del Campo (Rural Workers’ Association, or ATC for short), an independent farm workers organization, as well as for the Coordinadora de Latinoamericana Organizaciones del Campo (the Latin American Coordinator of Rural Associations, or CLOC for short). CLOC is made up of 84 rural worker organizations in 18 Latin American countries.

Despite what the Western corporate media has reported, “pre-candidate” is not an official designation in Nicaragua. Those who wish to run for office must do so under the banner of one of six registered national parties, five of which are anti-Sandinista.

Many media outlets are opposed to the Ortega government and yet are allowed to operate. For example, the Chamorro family still operates La Prensa, a newspaper.

“Here, we hear from people who are against the government, but we don’t accept people taking U.S. money for coups,” Torrez said.

The Violeta Barrios de Chamorro Foundation accepted $7 million between 2014 and this year from the U.S. Agency for International Development. Nicaragua has been cracking down on U.S. funded operations that seek to subvert their progress. That includes groups who were involved in the 2018 coup attempt that killed more than 300 Nicaraguans, most of whom were Sandinistas. Plus, this past September, Cristiana Chamorro, the foundation’s founder and daughter of former right-wing president Violeta Chamorro, was arrested for money laundering.

“In other places, they go to college and get drunk in financial paradises,” said ATC Secretary-General Edgar Garcia. “But here, they are in jail.”

Julie Varughese is editor of Toward Freedom. She spent a week traveling through Nicaragua as part of a delegation organized by the Associación de Trabajadores del Campo (Rural Workers’ Association, or the ATC for short), an independent farm workers’ organization.