India: Let Us Learn from Our Farmers!! 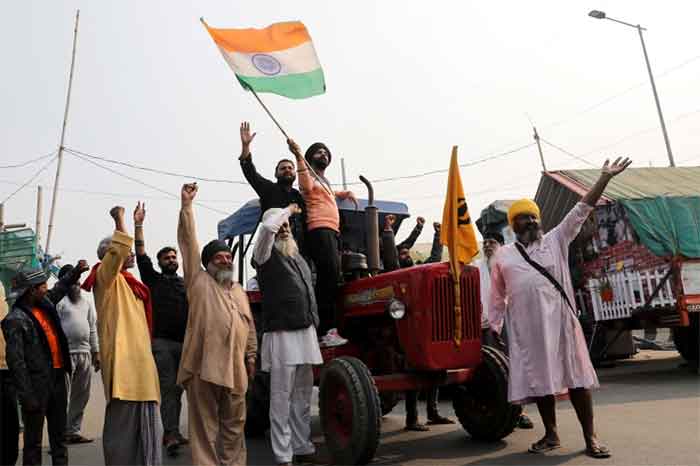 20 Nov 2021 – Our farmers know the way, go the way and show the way! Thanks to their relentless struggle and their great sacrifices, for all of us – the three anti-farmer laws have finally been repealed. For more than a year now – with blood, sweat, toil and tears, their protest has continued unceasingly.

In heat and cold, in the pouring rain and under the blistering sun – they did not stop! They did not cave in to threats and intimidation, to derogatory remarks (‘andolanjeevi’, ‘khalistani’, ‘terrorists’, ‘just a few of them’, ‘anti-national’ and much more and worse) and a corrupt deal to buy off some of them; the Government and their ilk were clearly hostile to them: foisted false cases, employed the divide and rule tactic, even mowed down some of them to death. Officially, about seven hundred of them have died! Most of the media which is ‘godified’, corrupt and biased, blanked out this biggest and longest protest in the world! Braving all odds and a raging COVID-19 pandemic the farmers continued! Today they have triumphed! A lesson for all to learn! Let us learn from our farmers!

The farmers will continue their protests, till it is absolutely clear that all their demands are met unconditionally. With the ensuing elections both in Uttar Pradesh and Punjab, they are aware that this could be just an election gimmick. The BJP and their allies are expected to lose badly in both States; the most obvious thing for the Government to do was to ‘roll-back’ hoping it will bring them dividends at the hustings. The Prime Minister is clear: he is convinced that these laws were meant to ‘benefit’ the farmers; he speaks of the opposition of ‘a few’. So why then a repeal? The government is still silent on some of their major demands – including the Minimum Support Price (MSP)! The farmers are no fools- they know the way!

Let us learn from our farmers because the nation has still plenty of critical and urgent issues to address. For one, the Unlawful Activities Prevention Act (UAPA) should be repealed immediately and unconditionally. It is used as a weapon to intimidate and harass, to incarcerate and to kill (as we have seen in the case of Fr Stan Swamy). It is used selectively: to silence dissent and against those who stand up for truth and justice; those who uphold the rights and freedoms enshrined in the Constitution of India; those who accompany the Adivasis and Dalits, the exploited and the excluded, the poor and the vulnerable in their quest for a more humane and equitable society. Those who demand greater freedom of speech and expression: the right to write and speak about ‘Two Indias’ – without fear and favour and in total freedom! Several are languishing in jail today because of the UAPA!

Then there is the Citizenship Amendment Act, which should be consigned to the fires that are meant to burn all that is evil and insidious. These amendments are patently discriminatory and against the letter and spirit of the Indian Constitution. It goes against the ethos of the time-tested ‘Atithi Devo Bhava’, (You become the one who considers that Guests are equivalent to God). This spirituality prescribes a dynamic of the host–guest relationship, which embodies the traditional Hindu-Buddhist philosophy of revering guests with same respect as God. Indians also freely use the phrase ‘Vasudhaiva Kutumbakam’ (The World is One Family!”). It is sheer hypocrisy that the amended CAA targets people of a particular faith. The farmers did not accept double-speak and hypocrisy from the Government!

We have the three anti–worker Labour Code Bills which were passed by Parliament on 23 September 2020 – without an opposition -which must be abolished immediately. The ordinary workers of our country have suffered immensely because of the pandemic: the Government denied them the possibility of returning home by public transportation after the lockdown was announced on the night of 24/25 March 2020. They were denied the wages due to them at that time. On their return after several months, many had to work long extra hours with less than half the wages! The three codes: the Industrial Relations (IR) Code, the Occupational Safety, Health and Working Conditions (OSH) Code, and the Social Security Code, along with the Code on Wages, 2019, amalgamate 44 labour laws –add to the misery of the workers!

There are several provisions in the Codes which are problematic and violate the rights of workers; besides, the process by which they were pushed through was hardly transparent. All central trade unions were opposed to the amalgamation of the hard-won labour laws and had submitted their objections on several occasions. The Government however, has not relented and in favour of the powerful anti-labour corporate sector. The farmers tell us that these codes can be repealed if the trade unions are organised and united!

The rights and dignity of the Adivasis have to respected; particularly with regard to jal, jungle aur jameen and the right of forest dwellers to live in a place they have called home since time immemorial. On 2 October 2021, The Union Ministry of Environment, Forest and Climate Change (MoEF&CC) released a consultation paper on fourteen proposed amendments in Forest Conservation Act, 1980 with reference to the amendments made in 1988 in this Act. The MoEF&CC has also cosmetically invited comments and feedback on this paper within a month of its release. The Government is making every effort towards providing ‘ease of doing business’ to its cronies. This latest move needs to be seen in the same context. It is effectively reiterating through these proposed amendments that this step is aimed at providing exemptions to businesses in the garb of ‘development’. It is a blatant and very conscious larceny (theft of personal property) of village resources.

The nexus between the mining mafia, the crony capitalists and the Government is obvious! More than two million of them and other forest-dwellers still remain at risk of forced displacement and loss of livelihood after their claims to stay on in their habitats under the Forest Rights Act were rejected. Many Adivasis from the Kevadia area (which is around India’s latest ‘white elephant’ – a gross statue in the name of Sardar Patel) were made to leave their homes overnight. Panchayats (Extension to Scheduled Areas) Act, (PESA) 1996 -a law enacted for ensuring self-governance through traditional Gram Sabhas for people living in the Scheduled Areas is officially violated! Fr Stan Swamy and others were fighting for these rights which were denied to the Adivasis. The farmers have not allowed the crony capitalists and the corporate mafia to destroy their livelihood!

The environment and our precious bio-diversity is being destroyed! India cut a very sorry figure at the recently concluded COP26. Inspite of being the world’s fourth biggest emitter of carbon dioxide, India said that it would cut its emission to net zero only around 2070! Most of the world leaders agreed to do so by 2050. In the meantime, the Government and their ilk continue to auction coal blocks, destroy forests and other natural resources for their profiteering. Effluence and other hotel and industrial waste have turned the River Sabarmati in Ahmedabad to a cesspool, the pathetic scene of corpses floating on the River Ganges, the unbelievable levels of air pollution in Delhi, the destructive unseasonal rains in Chennai and elsewhere, the landslides in Kerala and Uttarakhand due to the ecological devastation of the Western Ghats and the Aravalli Range – are some indicators to show that the ruling regime does not care for our common home! The agrarian community – with their small farms and sustainable agriculture -are the backbone of the Indian economy. They continue to be so!

The National Education Policy (NEP)2020, must be halted immediately! In its current form the implementation of the NEP 2020 is grossly undemocratic as it does not have the approval of the Parliament. There are several other reasons to object to it: one of them is that the NEP 2020 is anti-constitutional as it overrides the rights of state governments for taking important decisions about education which is a subject in the Concurrent List of the Indian Constitution which state governments should decide. It denies state governments their constitutionally provided federal power to take necessary academic and pedagogic decisions by imposing centralized regulatory bodies, centralized eligibility and evaluation tests and even centrally coordinated tests at classes 3, 5, and 8 in schools. Besides the NEP is designed to cater to a segment of India’s elite and it will also systematically exclude India’s poor and disadvantaged sections. The farmers are clear – that reform and change are important but only when the disadvantaged sections of society are given their due importance!

Minorities particularly the Muslims and the Christians are at the receiving end of a brutal regime which discriminates, denigrates and demonizes them. Many of the farmers are Sikhs (also a minority!) and derogatory language has been used against them! The so-called ‘Love Jihad’ and anti-conversion laws are anti- constitutional and undemocratic. Declare that everyone has the right to freely preach, practise and propagate one’s religion, to embrace the religion of one’s choice and/or marry the person of one’s choice.

Restore Articles 370 and 35A to the people of Jammu and Kashmir immediately! Come down heavily on undemocratic acts like we see in Gujarat today, where the livelihood of ordinary people is destroyed just because they sell non-vegetarian food in public or in Gurgaon where the Muslims are prevented from doing namaz in public spaces – which hindered no one! Tripura is burning: Muslims there are targeted today in one of the most peaceful and harmonious States of the country! Christians are hounded and beaten up, churches and prayer halls are razed to the ground! Those who spew venom and hate on the minorities do so with impunity and with the assured certainty that they will get all the immunity they need! The farmers show us that minority-bashing is not in the interest of the nation!

It has never been as bad as this before in the country. On every global indicator/ evaluation. India today is at the bottom of the pit! In fact, countries which for a long time were regarded as ‘bad’ – are faring today much better than India at the moment. The rich continue to become richer!  The marginalised and minorities, the excluded and exploited, the women and children, the Adivasis and the Dalits continue to be at the receiving end of a vicious and vengeful system, which is corrupt and partial. The law-and-order mechanism has also failed on several fronts! The farmers teach us that ‘enough is enough’ – unitedly we have to halt this rot!

On 26 November, we observe another Constitution Day. We need to internalise and own the letter and spirit given to us by our Constitutional fathers in 1949 that this great Charter – is respected, protected and actualised to the minutest detail, for every single citizen of our country and particularly to those whose rights and freedom (which have guaranteed by the Constitution) are trampled upon! The farmers demonstrate that this is a non-negotiable! We The farmers have shown us that the people of India can no longer be fooled by or accept empty rhetoric; promises of ‘acchhe din’; political gimmicks of populism (like embracing the Pope) and manipulations; divisive, discriminatory and dangerous agendas; lies and ‘feku-isms’; dictatorial and fascist ideologies. Their painstaking protest is a definite directive that one should not rest until the dream of justice, liberty, equality and fraternity is realised and belongs to ‘we the people’! That relentless struggle, which our farmers epitomise, will continue till Truth triumphs!

The journey of the farmers is still not over! But they definitely know the way, show the way and go the way for the future of India! Let us have the openness, the humility and the courage to learn from them!