“Meta… brings together our apps and technologies under one new company brand. Meta’s focus will be to bring the metaverse to life and help people connect, find communities and grow businesses.”

Is the launch of Meta merely an attempt at rebranding Facebook after the considerable hit its image has taken with the revelations of Facebook whistleblowers Frances Haugen and Sophie Zhang? Is it to move away from its sullied past and present to an alternate universe, the metaverse that Facebook will create in the future? Does the company want its users to forget about its hate-filled Facebook pages, which fuel the company’s ad-driven business empire, by moving the focus away from the Facebook brand? Or is this move aimed at winning back the young viewers that it is “losing traction” with?

Facebook’s internal documents, made public by Haugen, reflect this desperation to win back the young users, and they even talk about focusing Facebook’s attention on preteens—children in the age group of 10 to 12—who are viewed as a “valuable but untapped audience.” More importantly, Facebook seems to follow the same logic as the cigarette companies do by targeting children and getting them hooked on smoking. Both Facebook and these cigarette companies seem to believe that once they hook these children onto their products, they stay hooked for life, providing these companies with captive, lifelong customers. Or, in the case of Facebook, this means selling the data of their users, those hooked on Facebook, to advertisers for the lifetime of these users. 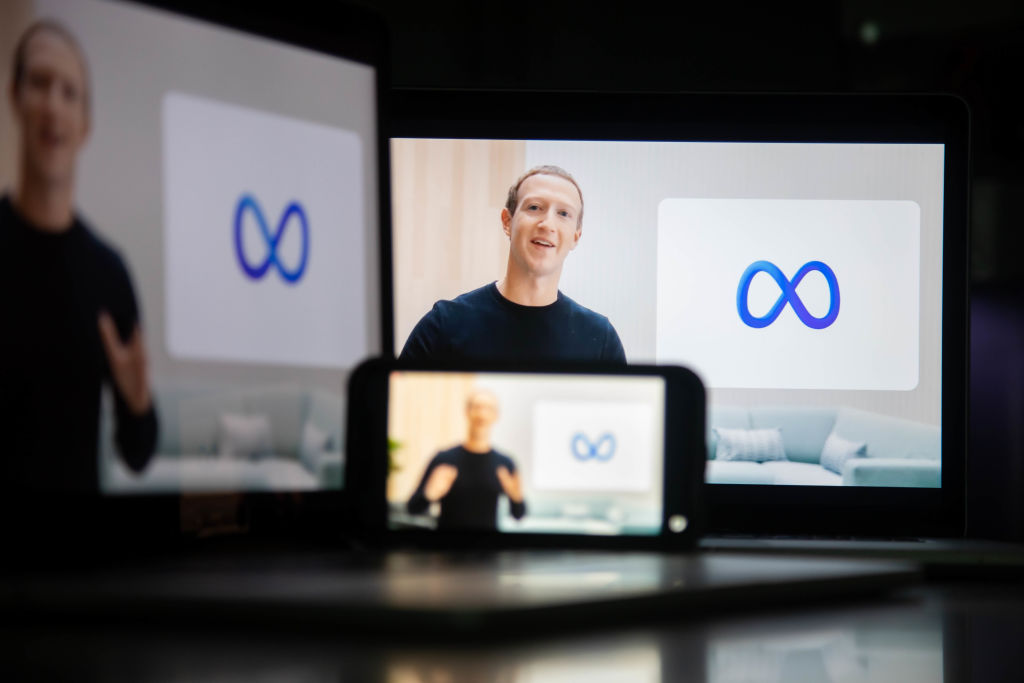 Mark Zuckerberg, CEO of Facebook Inc., speaks during the virtual Facebook Connect event where the company announced its rebranding as Meta on October 28, 2021.
(Michael Nagle / Bloomberg via Getty Images)

The general reaction to Facebook’s Meta—or its metamorphosis to the metaverse, described as “a hybrid of today’s online social experiences, sometimes expanded into three dimensions or projected into the physical world”—has ranged from cold to bewildered. For most users of Facebook, their knowledge of science fiction is meager. So the universe as a metaverse that seamlessly transitions from the real world to the virtual world might be quite an alien concept for a majority of people. This is in spite of meeting during the pandemic on various platforms as boxed, talking heads.

Meanwhile, those with a serious bent of mind and knowledge of literature, who find Facebook’s existing world already a dystopian one, are more likely to connect Meta to the prefix in the title of Kafka’s Metamorphosis. In this dystopian novel, the protagonist wakes up one morning as a human-sized cockroach; seen another way, his avatar changes to a cockroach in his metaverse. This potentially Kafkaesque alternative reality has provided fodder for some of the many memes mocking Meta since Facebook announced its launch. This main selling point of the metaverse seems to be the creation of virtual spaces where users can “get together with friends and family, work, learn, play, shop, create.” These experiences are made possible by using a variety of augmented reality (AR) or virtual reality (VR) devices. While Facebook’s messaging seems intent on proving Meta’s “cool” factor, it is the reception of the news that has been chilly.

Before we dismiss Facebook’s Meta, we need to also remember that it comes with a major cash flow that Facebook has accumulated, combined with Meta’s market capitalization of nearly $1 trillion. As a company, Meta is still a 1,000-pound gorilla in the metaverse of Wall Street. And Facebook alone has a user base of nearly 3 billion, with billions of users on other companies owned by Facebook, such as WhatsApp and Instagram. How many of them are unique users is a different question, but any company that captures the eyeballs of half the world’s population, and has a mountain of cash, cannot be written off.

There are two questions for Facebook, and yes, I am going to call it Facebook for now and not Meta. What is the metaverse that it is planning to build? And does it have a business model? In other words, will it get the young audience it has lost? And can Facebook sell either virtual “properties” or “commodities” in the metaverse for real money, apart from AR/VR devices like Oculus, which the company launched in August?

Let us look at the concept of the metaverse itself. As Zuckerberg himself explains, the difference between playing video games on a keyboard or a gaming console and the metaverse is the immersive experience. With the metaverse, users can use different devices, including special glasses, haptic gloves or suits, and can see or touch objects in the virtual world and “are able to immerse themselves in digital content rather than simply viewing it” by using these AR or VR devices. And yes, there have been enough books and films made on such futures. Those interested can read Isaac Asimov’s Robot series, which is focused on robots, but takes the metaverse of virtual/augmented reality for granted. The more recent iteration on this, and from where the concept of the metaverse as a virtual reality that is an expansion of the internet takes off, is Neal Stephenson’s 1992 science fiction novel Snow Crash.

There are two possibilities of the metaverse: one is to see it as a version of the real world where people can meet, work or play in the real world but with the help of augmented reality/virtual reality created by using different devices. That is, people will be able to visit different places in the world with their friends, meet in their offices, and even visit their doctors, all while sitting at home. The second is that a person can live as an avatar in an online virtual universe that has similar or different rules to the real world, a superior version of Second Life, backed by Facebook’s huge earnings and market power.

Second Life, set up in 2003, had many of the same goals as Meta. It is still popular among a small set of users, numbering nearly a million. It is an immersive universe—which promotes interaction among its user avatars—that can have a number of worlds with their own different rules and subcultures. It even has a currency, called the Linden dollar, which can be used within this universe, but not outside it. There is still an ongoing debate about what the fundamental purpose of Second Life is: is it an immersive platform or a gaming world?

Both these possibilities exist in Facebook’s Meta. An obvious driver of Meta as an immersive platform is the possibility of working from home. All tech companies are discovering that working from home is an attractive option for their workers. But the company loses the creativity that is available in the collective and controlled environment that an office space provides where employees meet and talk about their work. Zuckerberg’s Meta could sell office property that allows people to “come into work,” but in a virtual space rented or owned by the company as an office in Meta. This will force people to be in the “same space” as their colleagues while providing them with the luxury of avoiding a long commute or relocating to where the company offices are. Zuckerberg could sell or even rent space in his Meta and make a business model out of it. Or people themselves can rent such spaces, choosing where the space is a customizable virtual lounge to meet their friends, the same way people rent Zoom rooms.

The other business model that Zuckerberg can explore with regard to Meta is to have properties, gadgets, tokens, and a host of props that can be sold for Meta cash, which would be used in the various versions of the universe and still have value in the real world in dollars (or Facebook’s money, Libra). This would be unlike the Linden dollar, which can be used only in Second Life.

Both spaces could fall prey to relentless advertising, Facebook’s fundamental business model. In which case, the metaverse will be an immersive space for bringing people in primarily for advertisements. Given the immersive nature of the metaverse, there is a real possibility of Facebook building an even more dystopian world filled with advertisements and fake news, so that people’s eyeballs can be captured and sold continuously to the advertisers.

The gaming world is more difficult for Zuckerberg to cash in on. The gaming industry has been decades in the making and has taken off during the pandemic in the same way that online platforms like Zoom and OTT platforms like Netflix have. There are more than 3 billion gamers in the world, who spend a huge amount of time on their gaming consoles. It is the gamers who have driven high-end PCs and laptops, which have then resulted in other technological evolution relating to high-end graphics, including video editing. This has driven Nvidia’s graphic processing units and a range of Artificial Intelligence (AI) applications. For the gamer generation, Zuckerberg and Facebook are again not seen as cool. They are unlikely to be attracted to Zuckerberg’s version of the metaverse.

Of course, with his bags of cash, it is possible for Zuckerberg to attract companies that can make these games for his brand. If Meta can attract a set of well-known gaming companies to the platform, will that power Zuckerberg’s version of the metaverse? Will such gaming companies give up their independence to Facebook? That is not an easy question, as, after all, cash has its allure: of more cash!

The short-term goal of Facebook was to get away from this image of a sleazy company promoting hate and fake news. But it is also focusing on the new era of connectivity and AI tools that we are entering, which can help power game-like alternate universes intersecting with the real one. But here is the Achilles heel of the U.S. companies: the U.S. is far behind China and South Korea in the 5G race and much poorer in its broadband penetration from many European countries. Can the U.S. overcome this deficit with the state spending on its digital infrastructure?

Can Facebook also overcome its image as a toxic social media company and build a second life for itself with Meta? Facebook can still wield a lot of power and influence, but with its aging user base, it may slowly dwindle in importance. Society may punish Facebook for selling hate and fake news, but of course, only after it has inflicted enormous damage to the world’s social fabric. The caution here is that virtual reality can also be a toxic space, as we know from the misogyny in a significant section of the gaming community. Will Facebook, with its history, add to that and build a dystopian Meta?

Prabir Purkayastha is the founding editor of newsclick.in, a digital media platform. He is an activist for science and the free software movement.

Anticopyright: Editorials and articles originated on TMS may be freely reprinted, disseminated, translated and used as background material, provided an acknowledgement and link to the source, TMS: Meta Isn’t Just about Rebranding Facebook—Could It Bring a Dystopian Future?, is included. Thank you.