The Army is getting great power competition all wrong  By Daniel L. Davis

The U.S. Army does not need to go abroad in search of missions to make itself appear relevant. What it very much needs to do is focus on its core warfighting skills and hone its ability to fight and win battles that might crop up involving major opponents — in the defense of our country, rather than risk our soldiers getting dragged into fighting wars for other countries. Read More

No one wants to see the use of nuclear weapons ever again. However, endorsing a sole purpose doctrine and surrendering our nuclear capabilities before the rest of the world agrees to do so will only destabilize the international system. Read More

Are adversaries using US critical infrastructure as a training range?  By Jan Kallberg

Critical infrastructure is a significant attack vector to track and defend. Still, cyberattacks on U.S. critical infrastructure create reactions that might not be wholly predictable — creating risk for the adversary. For the U.S., the risk is that we try too hard to find strategic intent where there is none. Read More

The US is wholly unequipped to resupply forces in a great power conflict  By Seth Cropsey, Harry Halem

El Salvador has the potential to be the Soviet Union’s Cuba. Read More

The US must separate nuclear deterrence from biological weapons  By Christine Parthemore, Andy Weber

Though much work remains to be done, the technologies and capabilities now being deployed for pandemic responses are giving rise to an historical opportunity for the nation: It is time to end the U.S. policy of using nuclear weapons to deter biological weapon threats. Read More 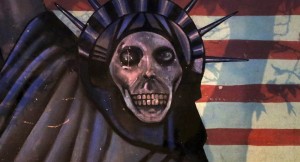 Anticopyright: Editorials and articles originated on TMS may be freely reprinted, disseminated, translated and used as background material, provided an acknowledgement and link to the source, TMS: Multiple Articles on Militarism, Weapons, War Preparations, is included. Thank you.