Revealed, the Shocking Conditions at Belmarsh Prison That Julian Assange Is Exposed to 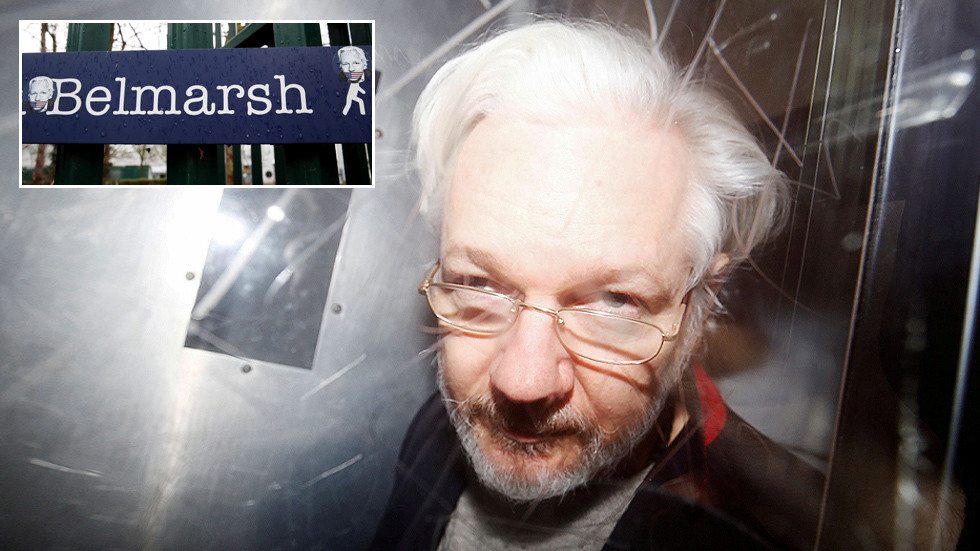 17 Nov 2021 – As Julian Assange waits to find out if he will be extradited to the US, a new report has painted a bleak picture of the London prison he is being held in, highlighting concerns over inmates’ welfare in particular.

On 12 November, the HM Inspectorate of Prisons published an investigation on conditions in London’s Belmarsh high security prison – dubbed ‘Britain’s Gitmo’ – which spells out in some detail the nightmarish environment WikiLeaks founder Assange has been forced to call home since his expulsion from the Ecuadorian Embassy in April 2019.

The report was based on two “unannounced inspections” conducted in July and August this year. Assange has remained in Belmarsh since Britain’s rejection of the US extradition case in January, which hinged on a psychological assessment that found his risk of committing suicide if sent to face trial in Washington – where he could face up to 175 years in solitary confinement at a supermax jail – was “substantial.”

Investigators found Belmarsh staff “had not paid sufficient attention to the growing levels of self-harm,” “and there was not enough oversight or care taken of prisoners at risk of suicide,” meaning “urgent action needed to be taken” in order to ensure prisoners were kept safe. Since the Inspectorate’s last visit in 2018, there had been four suicides, while recorded incidents of self-harm were four times higher. Figures for attempted suicides weren’t cited, although internal probes into such incidents were said to be “very poor.”

Prisoners judged to represent a self-harm or suicide risk were subject to welfare checks, but wider support for these individuals was said to be “limited,” while assistance provided through the official Assessment, Care in Custody and Teamwork process was “weak,” with inspectors “not assured that prisoners subject to constant supervision were always kept safe,” no safeguarding processes in place, and the prison’s internal ‘Safer Custody hotline’ checked rarely by staff.

The number of recorded incidents of self-harm had doubled due to Covid-19 restrictions, with 315 recorded incidents, involving 94 prisoners, in the 12 months to June 2021. It’s possible Assange is among this number – as Judge Baraitser’s extradition ruling noted, he called the Samaritans, a UK charity helpline providing emotional support to those in emotional distress, struggling to cope, or at risk of suicide, on a “virtually” nightly basis, and when unable to reach them, slashed his thigh and abdomen to distract from his sense of isolation.

The Inspectorate paints a disquieting picture of prison officers almost asleep at the wheel in respect of vulnerable inmates. “Many staff” were said to have “routinely failed to collect or turn on body-worn cameras,” over the course of the investigators’ visit, and “officers who were supposed to be supervising the most vulnerable prisoners” were spotted “sitting reading the paper.” Moreover, only 50% of inmates hadn’t experienced any victimisation by prison officers, and “significantly more prisoners than in similar prisons” had received verbal or physical abuse from staff.

Inmates are also at enhanced risk of harm from other inmates. The Inspectorate recorded significantly heightened levels of violence since its last visit, despite Covid-19 restrictions limiting the time most prisoners were out of their cells. Data had been collected on violence and use of force, but it wasn’t put to any tangible use, such as developing a strategy for reducing violence. There had been no formal strategic meeting to address violence for over 18 months.

In all, 341 violent incidents had been recorded over the previous 12 months, a year-on-year increase of almost 70, most of the rise attributable to prisoner-on-prisoner violence. This created an environment in which “too many prisoners felt unsafe,” with 60% saying they’d felt at risk at some point during their incarceration, and one in four concerned about their wellbeing when the Inspectorate came unexpectedly knocking. Furthermore, internal figures had been fudged to suggest violence had reduced due to fewer incidents, but in reality, this was due to fewer prisoners being in the jail.

Given this grim environment – in which Assange will shortly be married – it is perhaps unsurprising that a psychological assessment diagnosed him with severe recurrent depressive disorder, typified by frequent suicidal thoughts, “loss of sleep, loss of weight, impaired concentration, a feeling of often being on the verge of tears, and a state of acute agitation in which he was pacing his cell until exhausted, punching his head or banging it against a cell wall.” He thought about taking his own life “hundreds of times a day,” and had a “constant desire” to self-harm or commit suicide.

The assessment concluded that, were Assange held in solitary confinement in the US for a prolonged period, his mental health would “deteriorate substantially, resulting in persistently severe clinical depression and the severe exacerbation of his anxiety disorder, PTSD and suicidal ideas.” At the recent extradition appeal hearing, Biden administration lawyers offered “assurances” that Assange would neither be jailed in the notorious ADX Florence in Colorado, America’s most extreme prison, nor subject to excessively harsh ‘Special Administrative Measures’ (SAMs).

Contradictorily though, Washington’s official legal submissions to the court state that the US “retains the power” to do both. The fate of Joshua Schulte, charged with providing WikiLeaks sensitive CIA documents – the release of which led to then-Agency director Mike Pompeo designating the organization a “non-state hostile intelligence service” – offers a snapshot of what could await Stateside.

Court papers filed in January by Schulte’s lawyers outlined how their client had not been outside since entering New York’s Metropolitan Correction Center more than two years prior, and had been held under conditions usually reserved for terrorism defendants, to prevent them communicating with others. Accordingly, when Schulte is moved outside his cell, he is “shackled from head-to-toe”.

Schulte’s cell was said to be “filthy… the size of a parking space, [and] infested with rodents, rodent droppings, cockroaches and mold,” with no heating, air conditioning, or functioning plumbing, “while sunlight is blocked by a blacked out window,” temperatures fall so low “water in his cell turns to ice and he shivers despite wearing four sets of clothing, five sets of socks, two blankets and three sets of socks on his hands,” and “bright lights are on nonstop.”

A ruling on Assange’s extradition is expected in December; until then he remains in Belmarsh.

Kit Klarenberg, an investigative journalist exploring the role of intelligence services in shaping politics and perceptions.