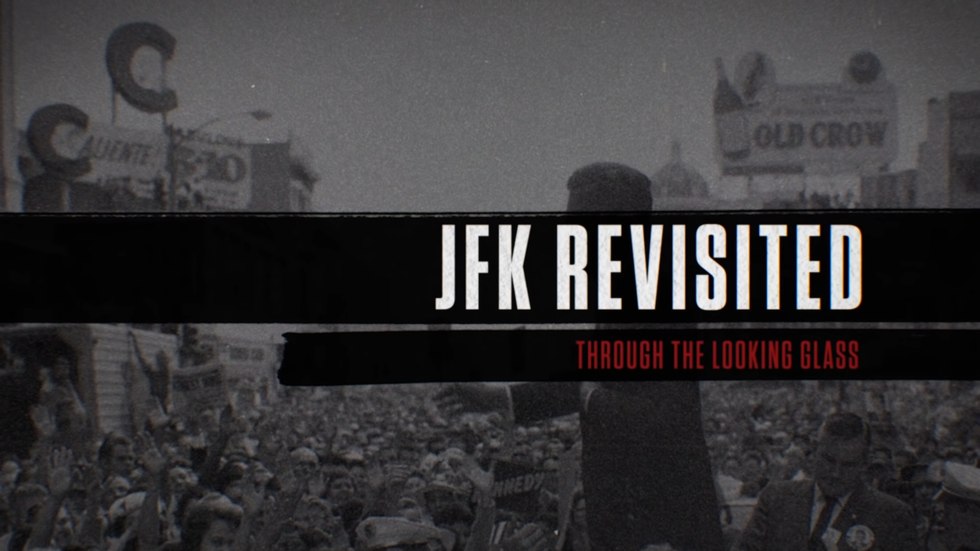 12 Nov 2021 – Stone’s new documentary, ‘JFK Revisited: Through the Looking Glass’, isn’t perfect, but it’s vitally important. He goes back into the assassination case with a fervor and has produced an insightful film that’s well worth a watch.

Stone’s ‘JFK’ hit theaters in 1991 and sent shockwaves through Washington and the corporate media because it was a compelling cinematic counter-myth to the equally fantastical Warren Report.

The Praetorian Guards of the establishment in the halls of power and press met the film with ferocity as they set out to debunk and defang it, because it directly challenged their narrative and thus their authority. They failed. ‘JFK’ was nominated for eight Academy Awards and brought in over $200 million at the box office. More importantly, though, it broke the spell of public indifference and somewhat loosened establishment obstruction with regard to JFK’s assassination.

Now, some 30 years later, Oliver Stone is back, this time with a documentary streaming on Showtime, ‘JFK Revisited: Through the Looking Glass’, which sticks its thumb in the eye of those who mindlessly espouse the ‘official’ story of JFK’s assassination as the truth.

As someone interested in the assassination, and who has read a multitude of books on the subject across the spectrum, from Gerald Posner’s ‘Case Closed’ and Vincent Bugliosi’s ‘Reclaiming History’ to Jim Marrs’ ‘Crossfire’ and James W. Douglass’ ‘JFK and the Unspeakable’, finding a decent documentary worthy of a watch on the topic is a challenge.

Thankfully, Stone has stepped up to the plate with ‘JFK Revisited’ – a serious and worthy work that offers a coherent, if limited, counter-theory to the official assassination line.

The film runs to a brisk two hours, features a bevy of talking heads – including John M. Newman (whose ‘JFK and Vietnam’ and ‘Oswald and the CIA’ are terrific), David Talbot (who wrote ‘The Devil’s Chessboard’ – also fantastic), Robert F. Kennedy Jr., James K. Galbraith, Dr. Cyril Wecht, and Dr. Henry Lee – and is a well-paced primer that would be a useful launchpad for anyone interested in diving even deeper into the case.

There’s a four-hour cut of the film that will purportedly be made available to the public in the new year, and I’m looking forward to seeing that version, as I assume it gets more into the specifics of who did the actual shooting – a subject the at-times-rushed two-hour version foregoes in favor of more foundational topics.

The film does examine a plethora of fascinating JFK assassination topics, though, including the following: Assassin Lee Harvey Oswald’s numerous and obvious connections to the intelligence community. The Warren Commission’s, intel community’s, and media’s knowing distortions and deceptions regarding the assassination. The fantasy of the magic-bullet theory. The contradictory medical evidence from Parkland Hospital in Dallas, and the autopsy at Bethesda Naval Hospital in Maryland. The remarkably similar plots to kill Kennedy in Chicago and Tampa, leading up to Dallas, which included other Oswald-esque patsies Thomas Arthur Vallee and Gilberto Lopez. And the story of Abraham Bolden, the first black secret service agent, who allegedly tried to inform the authorities of the Chicago plot, but instead of being hailed a hero, was railroaded and sent to prison.

‘JFK Revisited’ also spotlights the struggle between Kennedy and the political establishment. His famed American University speech of June 1963, where he laid out his vision for a new, peaceful US foreign policy, opens the film. This vision is foundational to ‘the why’ of Stone’s theory regarding the assassination, as it provides a motive for the intelligence agencies and military to act to remove a president they deemed soft on communism and weak in general.

Kennedy wanted to promote anti-colonialism, normalize relations with Cuba, not make the same mistake as the French in Vietnam, and have détente with the Soviets, even including combining efforts in the space race.

The intelligence community and the Pentagon had a very different and much more nefarious agenda. They were busy eliminating Lumumba in the Congo, fomenting a military coup in France, conjuring both the Bay of Pigs and Operation Northwoods – which would use false-flag terror attacks on US targets to force a war in Cuba – and pushing for American escalation in Vietnam.

This is why Kennedy moved to reduce the CIA budget by 20%, fired CIA warhorse Allen Dulles (who, curiously enough, would become a powerful member of the Warren Commission), and famously declared he would shatter the CIA into a million pieces. According to Stone, the CIA beat Kennedy to the punch, as it shattered his skull into a million pieces in Dealey Plaza, on November 22, 1963.

The gaping, gangrenous wound at the heart of America, which rots our national soul, was born on that fateful day, and it still festers and it still matters.

Unlike both malignant political parties and the shameless corporate media, Oliver Stone – whose status as pariah is the fuel that powers all his documentaries – understands this, and he’s trying to heal that wound by seeking out the truth about JFK’s killing.

While the establishment may ignore ‘JFK Revisited’, the general public shouldn’t. It’s a useful and insightful film for anyone who wants to understand their government and what it’s willing to do to maintain both its grip on power and the lucrative status quo.

Seek out and watch ‘JFK Revisited’. It isn’t perfect, but it’s vitally important.

Michael McCaffrey is a writer and cultural critic who lives in Los Angeles. His work can be read at RT, Counterpunch and at his website mpmacting.com/blog. He is also the host of the popular cinema podcast, Looking California and Feeling Minnesota.