“ … it is dystopian for the government to give Pfizer billions, mandate Americans to take its product, prohibit Americans from suing for harms, but yet refuse to let Americans see the data underlying its licensure.” 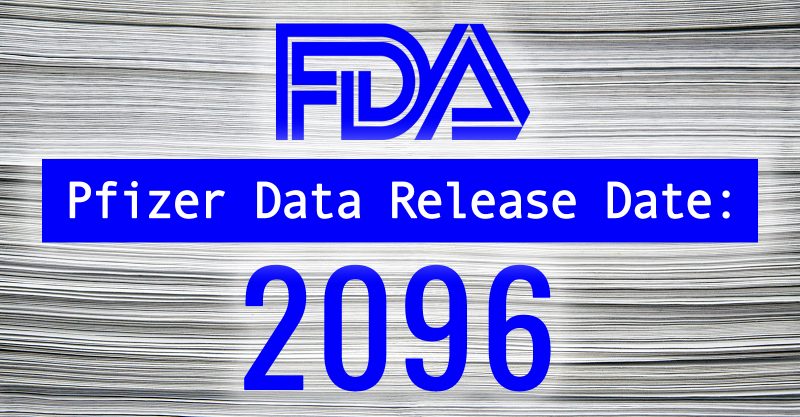 10 Dec 2021 – The U.S. Food & Drug Administration (FDA) now says it needs 75 years — up from the 55 years the agency initially requested — to fully release redacted versions of all documents related to the agency’s approval of Pfizer’s Comirnaty COVID-19 vaccine.

In a legal brief filed Dec. 7, the FDA said 59,000 additional pages of documents, not included in the agency’s earlier filings, need to be processed. The agency did not offer an explanation for why those documents initially were overlooked.

The agency said it can release an initial batch of approximately 12,000 pages by the end of January. Past that date, the FDA said it can process and disclose only 500 pages of documents per month.

The FDA did not divulge the criteria it will use to select the initial 12,000 pages of documents, or how the agency will prioritize the release of those pages, or of additional pages going forward.

The documents in question stem from a Freedom of Information Act (FOIA) request filed in August by Public Health and Medical Professionals for Transparency (PHMPT).

In its FOIA request, the group asked the FDA to release “all data and information for the Pfizer vaccine,” including safety and effectiveness data, adverse reaction reports, and a list of active and inactive ingredients.

In a filing submitted to a federal judge in November, the U.S. Department of Justice (DOJ), arguing on behalf of the FDA, initially claimed the agency could process some 329,000 pages of documents at a rate of only 500 pages per month, in order to have time to redact legally exempt material.

According to the DOJ, such material includes “confidential business and trade secret information of Pfizer or BioNTech and personal privacy information of patients who participated in clinical trials.”

Attorney Aaron Siri, who represents PHMPT, requested the FDA release the documents within 108 days — the amount of time needed by the FDA to license the Comirnaty vaccine.

Remarking on the FDA’s latest request to extend the timeline from 55 to 75 years, Siri stated:

“[I]f you find what you are reading difficult to believe — that is because it is dystopian for the government to give Pfizer billions, mandate Americans to take its product, prohibit Americans from suing for harms, but yet refuse to let Americans see the data underlying its licensure.

“The lesson yet again is that civil and individual rights should never be contingent upon a medical procedure.”

Prior to the FDA’s request for the additional 20 years, U.S. Rep. Ralph Norman (R-S.C.), on Dec. 2, introduced legislation that would require the agency to release all records of information related to Pfizer COVID vaccines within 100 days.

PHMPT, a group comprised of more than 30 medical and public health professionals and scientists from institutions such as Harvard, Yale, and UCLA, initially requested expedited processing of its FOIA submission on the basis there is a “compelling need” for the swift release of the documents in question.

When, in September, the FDA declined the request, Siri’s firm, Siri & Glimstad, filed a lawsuit against the agency on behalf of PHMPT. The lawsuit was filed in U.S. District Court for the Northern District of Texas.

PHMPT argued the release of the documents is a matter of urgency at a time where millions of Americans are facing mandates to get vaccinated or face repercussions.

As stated in PHMPT’s most recent brief demanding timely production of the documents:

“The entire purpose of FOIA is government transparency. In multiple recent cases, in upholding the FOIA’s requirement to ‘make the records promptly available,’ courts have required agencies, including the FDA, to produce 10,000 or more pages per month, and those cases did not involve a request nearly this important — i.e., the data underlying licensure of a liability-free product that the federal government requires nearly all Americans to receive.”

The FDA claimed its Center for Biologics Evaluation and Research, which maintains the records in question, has only 10 staff members, two of whom are “new.”

Additionally, the FDA argued an accelerated rate of release for the documents in question will divert “significant resources away from the processing of other FOIA requests that are also in litigation,” as well as other pending FOIA requests submitted prior to that of PHMPT.

According to Siri, response briefs from both sides are due on Dec. 13, and an oral argument will follow in court on Dec. 14.

As previously reported by The Defender, a study examining the processing of FOIA requests by the FDA and other federal public health agencies between 2008 and 2017 found the FDA processed 114,938 such requests, fully or partially granting 72.4% of them.

Of these requests, 39.8% were considered “complex.”

By contrast, the FDA now claims a backlog of 400 FOIA requests. It’s unclear how many pending requests are considered complex

Prior to authorizing or licensing COVID vaccines, the FDA promised full transparency on the process.

The federal government’s FOIA request guidelines outline two conditions under which a FOIA request may be processed on an expedited basis.

“if the lack of expedited treatment could reasonably be expected to pose a threat to someone’s life or physical safety.”

The second condition is

“if there is an urgency to inform the public about an actual or alleged federal government activity if made by a person who is primarily engaged in disseminating information.”

In its legal brief, the FDA did not explain how the agency was able to review the nearly 400,000 Pfizer documents in order to expedite the approval of Pfizer’s vaccine in just 108 days.

The FDA also did not explain why the agency cannot expand its staffing capacity to better respond to FOIA requests, or why it can’t enlist the help of other federal agencies, such as the DOJ, which is handling the FDA’s legal defense against the PHMPT lawsuit.

Michael Nevradakis, Ph.D., is an independent journalist and researcher based in Athens, Greece.