“Folks, I don’t trust children. They’re here to replace us.”

Stephen Tyrone Colbert is an American comedian, writer, producer, political commentator, actor, and television host. He is best known for hosting the satirical Comedy Central program The Colbert Report from 2005 to 2014 and the CBS talk program The Late Show with Stephen Colbert beginning in September 2015. Wikipedia 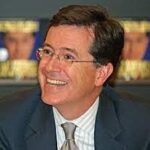 Anticopyright: Editorials and articles originated on TMS may be freely reprinted, disseminated, translated and used as background material, provided an acknowledgement and link to the source, TMS: “Folks, I don’t trust children. They’re here to replace us.”, is included. Thank you.