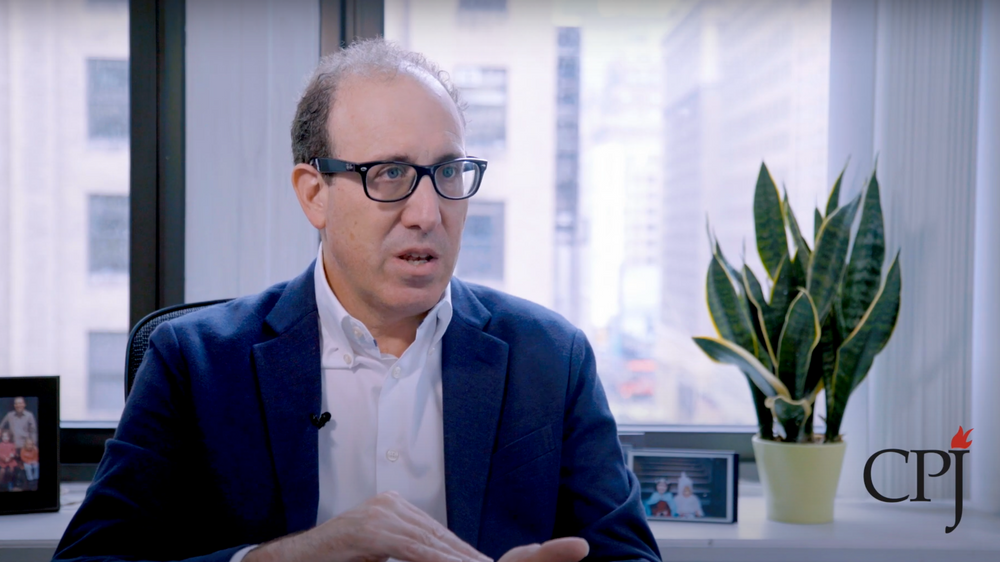 20 Dec 2021 – A record number of journalists are imprisoned throughout the world, according to the annual prison index released by the Committee to Protect Journalists (CPJ). But that number excludes WikiLeaks founder Julian Assange.

CPJ, which is based in New York, opposes the United States Justice Department’s prosecution against Assange. However, for the third year, the press freedom organization declined to classify him as a jailed journalist.

In the organization’s press release on the 2021 index, it states, “No journalists were jailed in North America at the time of the census deadline.” That is only true if one redefines Assange as someone who is not a journalist.

Reporters Without Borders (RSF), based in Paris, previously joined with CPJ on press freedom campaigns. They also keep an annual tally of journalists in detention, yet unlike CPJ, RSF included Assange in their 2021 round-up.

Screen shot from Reporters Without Borders’ Round-Up of Journalists Detained, Killed, or Held Hostage and Missing in 2021

“Held in London’s Belmarsh maximum-security prison since April 2019, the U.S. government continues to pursue Assange’s extradition on the basis of 18 charges connected with Wikileaks’ publication in 2010 of hundreds of thousands of leaked classified documents revealing war crimes and human rights violations that have never been prosecuted,” RSF acknowledged.

Assange is listed among other examples of detained journalists, including Zhang Zhan, Raman Pratasevich, and Pham Doan Trang.

CPJ was asked for comment on the continued exclusion of Assange from their annual index, but as of publication, their press team did not respond.

Seventeen charges under the Espionage Act were announced by the Justice Department in May 2019. One computer crime charge was announced in April 2019 as well—the same month Assange was expelled from the Ecuador embassy, arrested by British authorities, and detained at Belmarsh.

When Assange was first omitted from CPJ’s annual index in 2019, the organization referred reporters with questions to their methodology.

“CPJ defines journalists as people who cover news or comment on public affairs through any media—including in print, in photographs, on radio, on television, and online. We take up cases involving staff journalists, freelancers, stringers, bloggers, and citizen journalists.”

“After extensive research and consideration, CPJ chose not to list Assange as a journalist, in part because his role has just as often been as a source and because WikiLeaks does not generally perform as a news outlet with an editorial process,” Mahoney argued.

Yet Assange is not a source. He did not work for any of the agencies, where employees or contractors had access to the materials. U.S. Army whistleblower Chelsea Manning was the source.

John Goetz, who worked for German newspaper Der Spiegel when it partnered with WikiLeaks on the Afghanistan War Logs, submitted testimony for Assange’s defense during his extradition hearing in September 2020. He described “significant innovations in the field of investigative journalism” that he observed.

“Many of us at Der Spiegel [had] long wanted to publish to publish online documents, which proved the accuracy of our stories, yet before WikiLeaks, that was uncommon. It was WikiLeaks that first initiated large journalistic partnerships, something that is now almost common; for example, the ICIJ partnership around the ‘Panama Papers.’”

Goetz added, “At the time, the idea that major publications would work together violated much of what I had learned. WikiLeaks pioneered the online dropbox for submissions to newsrooms, which is now commonplace in media around the world.”

“The emphasis placed by WikiLeaks on secure communications in order to protect its materials and journalistic sources, which back in 2010 was unheard of, has since become the norm amongst investigative journalists.”

Mark Feldstein, a former CNN and ABC News correspondent who testified at the same extradition hearing, said, “Assange has engaged in the essence of journalism: gathering and publishing newsworthy information and documents for the public.”

Former New York Times general counsel James Goodale represented the Times when they published the Pentagon Papers. He is also a senior adviser to CPJ.

In his 2013 book, Fighting For the Press, Goodale wrote, “It should be clear Assange is carrying out the digital equivalent of editing and gathering news in the digital age.”

“Assange sought out secret information by setting up a private website for the anonymous transmission of information to him,” according to Goodale. “Journalists asking sources to reveal secrets is the essence of journalism. The only thing that has changed is that online chats and a digital submission system have replaced meeting over a cup of coffee and a P.O. Box.”

CPJ executive director Joel Simon has insisted for more than a decade that it is irrelevant whether Assange is a journalist. In fact, he believes that question is not “ultimately resolvable.”

“WikiLeaks has tried to suggest that it functions as a journalistic entity,” Simon wrote in his book, The New Censorship, which was published in 2015. “I’m skeptical. WikiLeaks is best described as an anti-secrecy advocacy group that uses journalistic strategies to advance its goals.”

While Simon waffles on the matter, U.S. intelligence agencies, such as the CIA, have had no trouble resolving the question in a manner that helps them justify targeting Assange as a “malevolent foreign actor” or an “information broker,” who does not deserve press freedom protections. 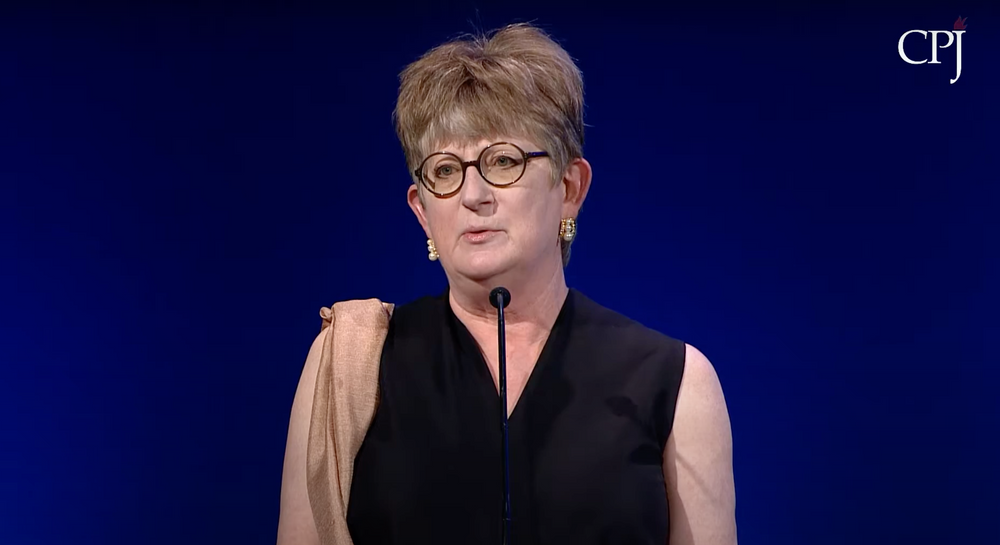 Screen shot of Kathleen Carroll, chair of CPJ’s Board of Directors, at the 2018 International Press Freedom Awards (YouTube)

The chair of CPJ’s board of directors is Kathleen Carroll, who was the executive editor of the Associated Press when WikiLeaks obtained documents from Manning. AP objected to the terms of the arrangement offered by WikiLeaks and chose not to work on the documents with WikiLeaks.

At the Nieman Conference on Secrecy and Journalism on December 16, 2010, a little more than two weeks after the first diplomatic cables were published, Carroll told an audience AP passed on partnering with WikiLeaks. The AP was unwilling to grant WikiLeaks “control over where the documents were stored and who in our organization had access to them.”

Carroll also suggested, “Assange [was] an advocate, and those of you who are journalists understand what it’s like to deal with advocates. They’re advocating for a certain point of view.”

“One of the challenges that the AP has sometimes is because we are a U.S.-based organization—We’re a global organization. We have a good chunk of revenue and customers around the world and staff there, but we’re very often shorthanded as an American organization. And it’s possible that Mr. Assange thought that we were tainted by that in some way.”

Asked if Assange informed AP of why they were denied access to the documents, Carroll said he did not say. So what Carroll suggested was entirely conjecture.

Jacob Weisberg, former editor-in-chief of Slate Group, is the vice chair of CPJ’s board of directors. He opposed Assange and WikiLeaks in 2015 when they published emails from Sony Entertainment that were hacked. He published an opinion article at Slate, which he oversaw, under the headline, “Stop Publishing the Sony Hacks.”

“News outlets should obviously cover the story of the hack itself, the effect on Sony, the question of how it happened, and who’s responsible. This is a big and legitimate news story,” Weisberg declared. “But when it comes to exploiting the fruits of the digital break-in, journalists should voluntarily withhold publication.”

“They shouldn’t hold back because they’re legally obligated to—I don’t believe they are—but because there’s no ethical justification for publishing this damaging stolen material.”

Weisberg failed to disclose that he had ties to Sony Entertainment chief executive Michael Lynton, and emails he sent were in the archive that WikiLeaks published.

Washington Post columnist Erik Wemple contended Weisberg should have included a disclosure. Weisberg denied the existence of any conflict of interest and countered, “I continue to think that writing articles based on these emails is a massive violation of privacy—now including mine—without any compelling justification.”

In November 2020, CPJ executive director Joel Simon outlined some of the press freedom issues President Joe Biden needed to deal with after President Donald Trump’s administration fueled contempt for journalists. Remarkably, it contained no mention of the prosecution of Assange.

For what it’s worth, Assange has an International Federation of Journalists (IFJ) press card. Since 2010, he also has been a member of the Media Entertainment and Arts Alliance (MEAA), a trade union in Australia.

Every day that CPJ denies Assange a place in their jailed journalist index dilutes their credibility, as well as the ability of their advocacy to meaningfully contribute to an end to the U.S. government’s concerted attack on journalism.