Peace by Global Disarmament or by Press Freedom?

6 Dec 2021 – Which is the better road to world peace? This is not for the Norwegian awarders of the Nobel Peace Prize to decide. They are legally bound by Alfred Nobel´s testament and his choice between two entirely opposite policies. If weapons had been the solution, we would have had peace long ago. Nobel went to the heart of the problem, the goal of his testament, much more important today, was to liberate all nations from the yoke of weapons, warriors and war.

How can the 2021 prize, for “freedom of expression in the Philippines and Russia,” be the best effort for a disarmed world order in the world today? My 14-year research leaves no doubt that the Norwegian awarders never liked Nobel’s vision of peace and have used the prize to serve their own ideas and interests. The committee has practiced a concept of peace without any meaningful limitation and, even worse, Nobel did not use the word peace in his will. Another basic flaw is that they have glorified persons while the task was to promote a political idea, peace by disarmament.

The sad truth is that Nobel´s prize failed from the start in 1901. Rather than actively promoting peace by co-operation on global disarmament it has served official Norway´s belief in military security and trust in an imperial and belligerent superpower. My research, including the committee´s archives, reveals a systematic repression of the people and ideas Nobel had in mind. A total 114 “champions of peace” were cheated of their prizes. Showing not the least interest in what Nobel´s prize could achieve in today´s world, the Nobel committee recently, instead of ending its shabby management, chose to argue ferociously against the idea of disarmament and deliver an intemperate attack on my honesty and competence.

To negate my criticism the award committee has started to routinely make brazen claims that the prizes are “firmly anchored” in Nobel´s will, each year invoking a random expression in the testament. But what does the 2021 prize for press freedom do for global disarmament? Similarly, with the UN Food Program (2020), Abiy Ahmed (2019), Mukwege/Murad (2018), were they engaged in global demilitarization? What makes the 2021 prize particularly lamentable is that the most deadly threat against press freedom in the world today is in the military field.

How could the committee fail to help end the cruel persecution of Australian journalist Julian Assange for revealing the war crimes of a belligerent superpower?

The Norwegian committee is averse to the most obvious and indispensable step to promoting Nobel´s vision of peace, announcing the world order he actually had in mind and how to achieve it. Without shame it insists on, in unfailing service to Norwegian foreign policy, continuing to ignore the express language on disarmament in the testament. Instead of defending its 120 years of betrayal of its mandate, today´s committee should start serving Nobel´s idea of security, justice and prosperity in a demilitarized world. 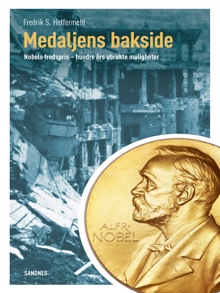 Shame or Fame: Norway and the Nobel Peace Prize – Presentation for English and other foreign publishers: https://booksfromnorway.com/books/2151-fame-or-shame

Anticopyright: Editorials and articles originated on TMS may be freely reprinted, disseminated, translated and used as background material, provided an acknowledgement and link to the source, TMS: Peace by Global Disarmament or by Press Freedom?, is included. Thank you.