7 Dec 2021 – A little over a year ago, I wrote in this blog that we are at a turning point in human history, that the US Empire is crashing and that there is a serious risk of a new North American Civil War. The blog was illustrated by automatic weapons being accumulated by millions of US citizens and by the following map of the United States showing the states in red expected to vote for Trump and those in blue to vote against him. The results turned out to be more or less as predicted. 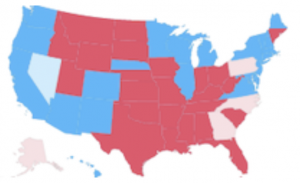 I pointed out in a later blog that the map corresponds, for the most part to the division between urban and rural. 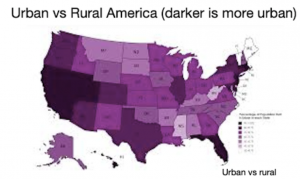 Factors continue to develop that may lead to the crash of the US Empire. In particular, the US government, now led by Democrats, continues to pour its resources down the rat-hole of military spending (see January blog this year) and raise tensions that could lead to wars with China, Russia, Iran, etc. And the impoverishment of rural areas continues.

Civil war did not break out on January 6 of this year when Trump supporters stormed the US Capitol and the Empire has not yet crashed. But the tensions between the different regions of the United States that I described at that time continue to develop, as shown by the following new maps.

First is a map of states, showing in red those that are likely to ban abortion if the US Supreme Court decides next summer, as expected, to allow the states to do so. Those needing an abortion in those states, if they have enough money, will have to move to another state in order to get an abortion. Note the resemblance to the maps above. 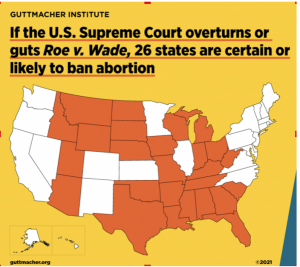 Second is a map of states showing the blue and purple those with many weapons possessed by citizens. Again, those who voted for Trump are more likely to have accumulated weapons that could be used in a civil war. 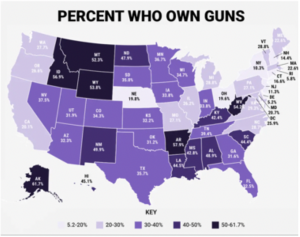 It’s the dialectics of history in action, raising hopes that the crash of the empire will have a soft landing.

Where is all this leading? Only time will tell.

The Harvard Youth Poll has just announced their recent results in which 35% of American youth believe that a civil war is imminent in the United States.

“Nearly half (46%) of young Republicans place the chances of a second civil war at 50% or higher, compared to 32% of Democrats, and 38% of independent and unaffiliated voters. Level of education (27% among college students and those with degrees compared to 47% for others) and whether young people live in urban (33%), suburban (33%), rural (48%) or small town (51%) environments are all significant predictors.”

As would be predicted from the analysis in the blog, the highest percentages are among Republican youth and youth in rural or small town environments.

Youth were not asked if they want or would take part in a civil war.