What Would Europe, the US, Do with One Billion Climate Refugees?

20 Dec 2021 – A bit of fiction. Or maybe not. If things keep going the way they are, the result will be that such a massive flux would create instability and tensions, impact the global markets, cause record prices of fossil fuels, food and everything else, and the bankruptcy of big private financial corporations… 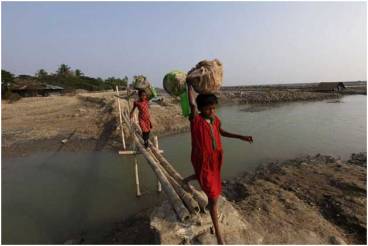 Already seven years ago, a former director general of the International Organization for Migration (IOM), William Lacy Swing, estimated that the number of climate migrants and refugees could reach one billion humans by the year 2050.

Such a scenario could well happen given the rapid growth of the ongoing climate emergency.

“Hazards resulting from the increasing intensity and frequency of extreme weather events, such as abnormally heavy rainfall, prolonged droughts, desertification, environmental degradation, or sea-level rise and cyclones are already causing an average of more than 20 million people to leave their homes and move to other areas in their countries each year.”

What would Europe, the US and other rich countries do then? Shall their politicians –and the growing far-right– fuel once more the fear of the “invasion” of migrants and refugees, saying that they include criminals and terrorists, will occupy the homes of honoured citizens, take all their jobs away, rape their daughters and, consequently militarise their borders?

Shall they send them to third countries in exchange for some money, like what already happens with Turkey? Or shall they just force them back to their countries of origin, which they had to flee due to floods, storms, tsunamis and famine, provoked by a climate disaster they did not generate?

The UN Refugee Agency (UNHCR) says that climate change is the defining crisis of our time and disaster displacement is one of its most devastating consequences.

“Entire populations are already suffering the impacts, but vulnerable people living in some of the most fragile and conflict-affected countries are often disproportionately affected.”

Refugees, internally displaced people and the stateless are on the frontlines of the climate emergency, it reports, adding that many are living in climate “hotspots”, where they typically lack the resources to adapt to an increasingly hostile environment.

UNHCR urges all countries to combat the growing and disproportionate impacts of the climate emergency on the most vulnerable countries and communities — in particular those displaced and their hosts.

1 Person Is Forcibly Displaced Every 2 Seconds due to conflict, persecution

These displacements are the result of conflict or persecution. At mid-2021, their number already reached 84 million. And there are 10 million stateless people, half of them under the age of 18.

Coincidentally, most of their countries of origin are also among the most hit by poverty and climate emergency.

Climate crisis is a human crisis

“The climate crisis is a human crisis. It is driving displacement and makes life harder for those already forced to flee.”

The impacts of climate change are numerous and may both trigger displacement and worsen living conditions or hamper return for those who have already been displaced.

Limited natural resources, such as drinking water, are becoming even scarcer in many parts of the world that host refugees. Crops and livestock struggle to survive where conditions become too hot and dry, or too cold and wet, threatening livelihoods, UNHCR adds.

In such conditions, climate change can act as a threat multiplier, exacerbating existing tensions and adding to the potential for conflicts.

“Hazards resulting from the increasing intensity and frequency of extreme weather events, such as abnormally heavy rainfall, prolonged droughts, desertification, environmental degradation, or sea-level rise and cyclones are already causing an average of more than 20 million people to leave their homes and move to other areas in their countries each year.”

On this, the Global Compact on Refugees, affirmed by an overwhelming majority in the UN General Assembly in December 2018, directly addresses this growing concern. It recognises that “climate, environmental degradation and disasters increasingly interact with the drivers of refugee movements”.

“We need to invest now in preparedness to mitigate future protection needs and prevent further climate caused displacement. Waiting for disaster to strike is not an option,” says Filippo Grandi, the UN High Commissioner for Refugees.

Every second 1 person is displaced by disaster

More than five years ago, in july 2016, IPS reported that, in fact, “every second, one person is displaced by disaster,” the Oslo-based Norwegian Refugee Council (NRC) reported, adding that in 2015 only, more than 19.2 million people fled disasters in 113 countries.

“On average, 26 million people are displaced by disasters such as floods and storms every year. That’s one person forced to flee every second.”

Further on, IPS wrote: Imagine a world with as many as one billion people facing harsh climate change impacts resulting in devastating droughts and floods, extreme weather, destruction of natural resources, in particular lands, soils and water, and the consequence of severe livelihoods conditions, famine and starvation.

Although not yet based on definite scientific projections, the proven speed with which the process of climate change has been taking place, might lead to such a scenario by 2050. If so, 1 in 9 human beings would be on the move by then, it added.

“Currently, forecasts vary from 25 million to 1 billion environmental migrants by 2050, moving either within their countries or across borders, on a permanent or temporary basis, with 200 million being the most widely cited estimate, according to a 2015 study carried out by the Institute for Environment and Human Security of the United Nations University.”

This figure equals the current estimate of international migrants worldwide.”

For its part, the UN International Organization for Migration (IOM) forecasts 200 million environmental migrants by 2050, moving either within their countries or across borders, on a permanent or temporary basis. Many of them would be coastal populations.

In an interview to IPS, the former IOM Director General, William Lacy Swing, explained that political crises and natural disasters are the other major drivers of migration today.

“We have never had so many complex and protracted humanitarian emergencies now happening simultaneously from West Africa all the way to Asia, with very few spots in between which do not have some issue.” See: Q&A: Crisis and Climate Change Driving Unprecedented Migration

Another warning comes from the United Nations Convention to Combat Desertification (UNCCD), which estimatesthat some 135 million people may be displaced by 2045 as a result of desertification.

Up to 12 million hectares of productive land become barren every year due to desertification and drought alone, which is a lost opportunity to produce 20 million tons of grain, adds the Bonn-based Convention secretariat.

Meanwhile, the increase in droughts and flash floods that are stronger, more frequent and widespread is destroying the land – the Earth’s main freshwater store, according to UNCCD.

“Droughts kill more people than any other single weather-related catastrophe and conflicts among communities over water scarcity are gathering pace. Over 1 billion people today have no access to water, and demand will increase by 30 percent by 2030.”

Africa is particularly susceptible since more than 90 percent of its economy depends on a climate-sensitive natural resource base like rain-fed, subsistence agriculture.

“Unless we change the way we manage our land, in the next 30 years we may leave a billion or more vulnerable poor people with little choice but to fight or flee.”

For its part, the Environmental Justice Foundation (EJF), reports that extreme weather events – from floods and storms, to heatwaves and drought – are already displacing an estimated 41 people each minute, and as temperatures continue to increase, climate extremes will worsen, sea levels will rise, and the world’s most vulnerable will bear the brunt.

Hunger and the climate

The UN Food and Agriculture Organisation (FAO) reports that the world produces enough food to feed everyone, yet, about 800 million people suffer from hunger. That is one in nine people. 60 percent of them are women.

And that about 80 percent of the world’s extreme poor live in rural areas. Most of them depend on agriculture.

Most importantly: “No other sector is more sensitive to climate change than agriculture.”

The above-cited causes of massive displacements just add to the fast-growing climate crisis, which will evidently greatly increase the number of migrants and refugees.

No matter if they will be one billion or 500 million or even 100 million. They are humans and victims of circumstances they have not created. What will rich countries do?