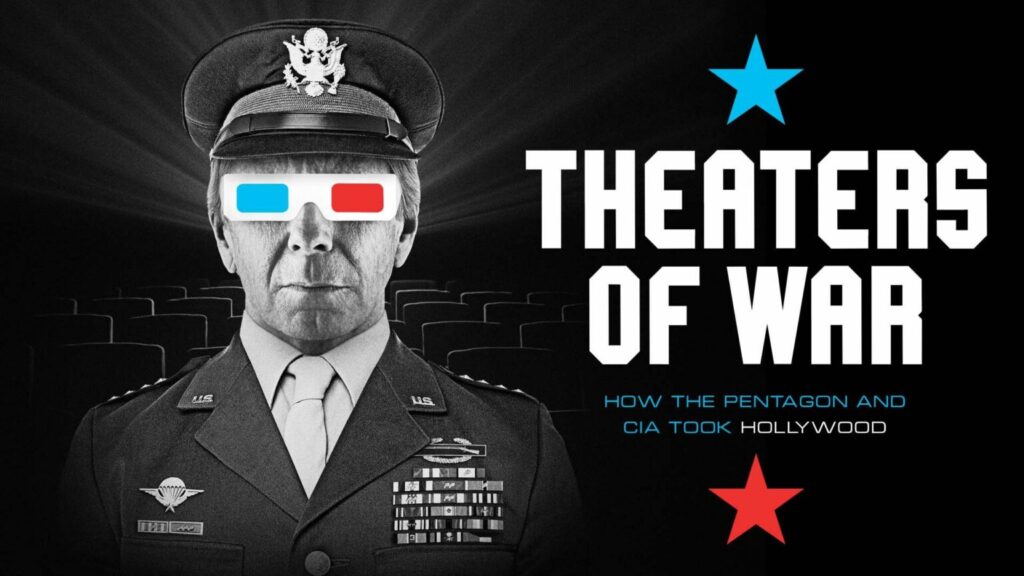 5 Jan 2022 – Propaganda is most impactful when people don’t think it’s propaganda, and most decisive when it’s censorship you never knew happened. When we imagine that the U.S. military only occasionally and slightly influences U.S. movies, we are extremely badly deceived. The actual impact is on thousands of movies made, and thousands of others never made. And television shows of every variety. The military guests and celebrations of the U.S. military on game shows and cooking shows are no more spontaneous or civilian in origin than the ceremonies glorifying members of the U.S. military at professional sports games — ceremonies that have been paid for and choreographed by U.S. tax dollars and the U.S. military. The “entertainment” content carefully shaped by the “entertainment” offices of the Pentagon and the CIA doesn’t just insidiously prepare people to react differently to news about war and peace in the world. To a huge extent it substitutes a different reality for people who learn very little actual news about the world at all.

The U.S. military knows that few people watch boring and non-credible news programs, much less read boring and non-credible newspapers, but that great masses will eagerly watch long movies and TV shows without too much worrying about whether anything makes sense. We know that the Pentagon knows this, and what military officials scheme and plot as a result of knowing this, because of the work of relentless researchers making use of the Freedom of Information Act. These researchers have obtained many thousands of pages of memos, notes, and script re-writes. I don’t know whether they’ve put all of these documents online — I certainly hope they do and that they make the link widely available. I wish such a link were in giant font at the end of a fantastic new film.

The film is called Theaters of War: How the Pentagon and CIA Took Hollywood. The Director, Editor, and Narrator is Roger Stahl. The Co-Producers are Matthew Alford, Tom Secker, Sebastian Kaempf. They’ve provided an important public service.

In the film we see copies of and hear quotations from and analysis of much of what has been uncovered, and learn that thousands of pages exist that nobody has yet seen because the military has refused to produce them. Film producers sign contracts with the U.S. military or CIA. They agree to “weave in key talking points.” While unknown quantities of this sort of thing remain unknown, we do know that nearly 3,000 films and many thousands of TV episodes have been given the Pentagon treatment, and many others have been handled by the CIA. In many film productions, the military effectively becomes a co-producer with veto power, in exchange for allowing the use of military bases, weapons, experts, and troops. The alternative is the denial of those things.

But the military is not as passive as this might suggest. It actively pitches new story ideas to movie and TV producers. It seeks out new ideas and new collaborators who might bring them to a theater or laptop near you. Act of Valor actually began life as a recruitment advertisement.

Of course, many movies are made without military assistance. Many of the best never wanted it. Many that wanted it and were denied, managed to get made anyway, sometimes at much greater expense without the U.S. tax dollars paying for the props. But a huge number of movies are made with the military. Sometimes the initial movie in a series is made with the military, and the remaining episodes voluntarily follow the military’s line. Practices are normalized. The military sees huge value in this work, including for recruitment purposes.

The alliance between the military and Hollywood is the main reason that we have lots of big blockbuster movies on certain topics and few if any on others. Studios have written scripts and hired top actors for movies on things like Iran-Contra that have never seen the light of day because of a Pentagon rejection. So, nobody watches Iran-Contra movies for fun the way they might watch a Watergate movie for fun. So, very few people have any notions about Iran-Contra.

But with the reality of what the U.S. military does being so awful, what, you might wonder, are the good topics that do get lots of movies made about them? A lot are fantasy or distortion. Black Hawk Down turned reality (and a book it was “based on”) on its head, as did Clear and Present Danger. Some, like Argo, hunt for small stories within large ones. Scripts explicitly tell audiences that it doesn’t matter who started a war for what, that the only thing that matters is the heroism of troops trying to survive or to rescue a soldier.

Yet, actual U.S. military veterans are often shut out and not consulted They often find movies rejected by the Pentagon as “unrealistic” to be very realistic, and those created with Pentagon collaboration to be highly unrealistic. Of course, a huge number of military-influenced films are made about the U.S. military fighting space aliens and magical creatures — not, clearly, because it’s believable but because it avoids reality. On the other hand, other military-influenced films shape people’s views of targeted nations and dehumanize the humans living in certain places.

Don’t Look Up is not mentioned in Theaters of War, and presumably had no military involvement (who knows?, certainly not the movie-watching public), yet it uses a standard military-culture idea (the need to blow up something coming from outerspace, which in reality the U.S. government would simply love to do and you could hardly stop them) as an analogy for the need to stop destroying the planet’s climate (which you cannot easily get the U.S. government to remotely consider) and not one reviewer notices that the film is an equally good or bad analogy for the need to stop building nuclear weapons — because U.S. culture has had that need effectively excised.

The military has written policies on what it approves and disapproves. It disapproves depictions of failures and crimes, which eliminates much of reality. It rejects films about veteran suicide, racism in the military, sexual harassment and assault in the military. But it pretends to refuse to collaborate on films because they’re not “realistic.”

Yet, if you watch enough of what is produced with military involvement you’ll imagine that using and surviving nuclear war is perfectly plausible. This goes back to the original Pentagon-Hollywood invention of myths about Hiroshima and Nagasaki, and runs right up through military influence on The Day After, not to mention the transformation — paid for by people who throw a fit if their tax dollars help prevent someone freezing on the street — of Godzilla from a nuclear warning to the reverse. In the original script for the first Iron Man movie, the hero went up against the evil weapons dealers. The U.S. military rewrote it so that he was a heroic weapons dealer who explicitly argued for more military funding. Sequels stuck with that theme. The U.S. military advertised its weapons of choice in Hulk, Superman, Fast and Furious, and Transformers, the U.S. public effectively paying to push itself to support paying thousands of times more — for weapons it would otherwise have no interest in.

“Documentaries” on the Discovery, History, and National Geographic channels are military-made commercials for weapons. “Inside Combat Rescue” on National Geographic is recruitment propaganda. Captain Marvel exists to sell the Air Force to women. Actress Jennifer Garner has made recruitment ads to accompany movies she’s made that are themselves more effective recruitment ads. A movie called The Recruit was largely written by the head of the CIA’s entertainment office. Shows like NCIS push out the military’s line. But so do shows you wouldn’t expect: “reality” TV shows, game shows, talk shows (with endless reunifications of family members), cooking shows, competition shows, etc.

I’ve written before about how Eye in the Sky was openly and proudly both completely unrealistic nonsense and influenced by the U.S. military to shape people’s ideas about drone murders. A lot of people have some small idea of what goes on. But Theaters of War: How the Pentagon and CIA Took Hollywood helps us to grasp the scale of it. And once we’ve done that, we may gain some possible insights into why polling finds much of the world fearing the U.S. military as a threat to peace, but much of the U.S. public believing that U.S. wars benefit people who are grateful for them. We may begin to form some guesses as to how it is that people in the United States tolerate and even glorify endless mass-killing and destruction, support threatening to use or even using nuclear weapons, and suppose the U.S. to have major enemies out there threatening its “freedoms.” Viewers of Theaters of War may not all immediately react with “Holy shit! The world must think we’re lunatics!” But a few may ask themselves whether it’s possible that wars don’t look like they do in movies — and that would be a great start.

Theaters of War ends with a recommendation, that movies be required to disclose at the start any military or CIA collaboration. The film also notes that the United States has laws against propagandizing the U.S. public, which might make such a disclosure a confession of a crime. I would add that since 1976, the International Covenant on Civil and Political Rights has required that “Any propaganda for war shall be prohibited by law.”

To learn more about this film, view it, or host a screening of it, go here.