Argentina Turns to Russia and Joins China’s Belt and Road

Argentina is trapped in $44 billion of IMF odious debt taken on by corrupt right-wing regimes. 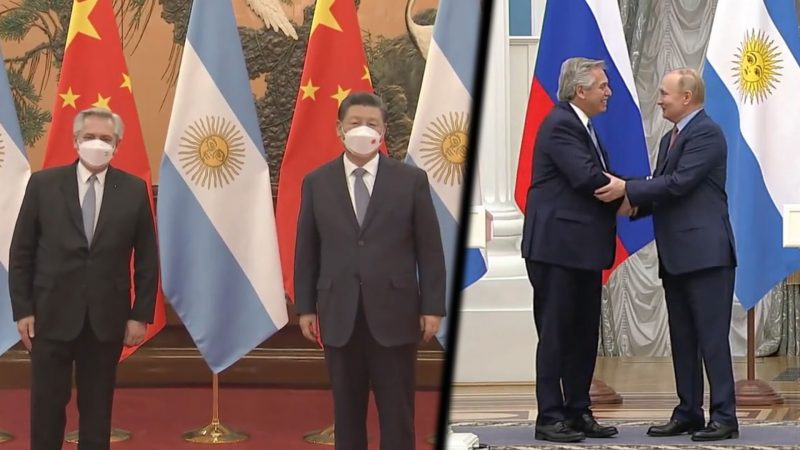 6 Feb 2022 – Seeking alternatives to US hegemony, President Alberto Fernández traveled to Russia and China, forming an alliance with the Eurasian powers, joining the Belt and Road Initiative.

The United States constantly intervenes in the internal affairs of Latin America, organizing coups d’etat, destabilizing independent governments, trapping nations in debt, and imposing sanctions. Washington sees the region as its own property, with President Joe Biden referring to it this January as “America’s front yard.”

Seeking alternatives to US hegemony, progressive governments in Latin America have increasingly looked across the ocean to form alliances with China and Russia.

Argentina’s President Alberto Fernández did exactly that this February, taking historic trips to Beijing and Moscow to meet with his counterparts Xi Jinping and Vladimir Putin.

Fernández signed a series of strategic agreements, officially incorporating Argentina into Beijing’s international Belt and Road Initiative, while expanding economic partnerships with the Eurasian powers and telling Moscow that Argentina “should be the door to enter” Latin America.

China offered $23.7 billion in funding for infrastructure projects and investments in Argentina’s economy.

In the meetings, Fernández also asked for Argentina to join the BRICS framework, alongside Brazil, Russia, India, China, and South Africa. Xi and Putin reportedly both agreed.

“I am consistently working to rid Argentina of this dependence on the IMF and the US,” Fernández explained. “I want Argentina to open up new opportunities.”

The Argentine president’s comments and meetings with Putin and Xi reportedly angered the US government.

Argentina Is Trapped In Odious Debt With The US-Controlled IMF

Argentina is a Latin American powerhouse, with significant natural resources and the third-largest economy in the region (after Brazil and Mexico, both of which have significantly larger populations).

But Argentina’s development has often been weighed down by debt traps imposed from abroad, resulting in frequent economic crises, cycles of high inflation, and currency devaluations.

The International Monetary Fund (IMF) – a de facto economic arm of the United States, over which Washington alone has veto power – has significant control over Argentina, having trapped the nation in huge sums of odious debt.

In 2018, Argentina’s right-wing President Mauricio Macri requested the largest loan in the history of the IMF: a staggering $57.1 billion bailout.

Macri was notorious for his corruption, and this was no secret at the time. By agreeing to give such an enormous sum of money to Macri’s scandal-plagued government, the IMF knew it was ensnaring Argentina in debt it would not be able to pay off. But this was far from the first time the US-dominated financial instrument had trapped Argentina in odious debt.

In December 2021, the IMF published an internal report admitting that the 2018 bailout completely failed to stabilize Argentina’s economy.

But when Argentina’s center-left President Alberto Fernández entered office in December 2019, his country was ensnared in $44.5 billion in debt from this bailout that the IMF itself admitted was a total failure. ($44.5 billion of the $57.1 billion loan had already been disbursed, and Fernández cancelled the rest.)

The Argentine government has tried to renegotiate the debt, but in order to do so the IMF has imposed conditions that severely restrict the nation’s sovereignty – such as appointing a British economist who “will virtually be the new economic minister,” acting as a kind of “co-government,” warned prominent diplomat Alicia Castro.

Seeking ways around these US debt traps, Fernández decided this February to turn to the two rising Eurasian superpowers.

Argentine President Fernández Travels To Russia To Meet With Putin

“I’m certain Argentina has to stop being so dependent on the [International Monetary] Fund and the United States, and has to open up to other places, and that is where it seems to me that Russia has a very important place,” Fernández said, explaining his motivation for the trip.

Fernández added that, for Russia, Argentina “should be the door to enter” the region, telling Putin, “We could be a venue for the development of your cooperation with Latin American nations.”

Fernández also thanked Moscow for collaborating with his country in the production of its Sputnik V covid-19 vaccine. Argentina was the first country in the western hemisphere to do so.

The Argentine president even pointed out in their meeting that he has received three doses of the Sputnik V vaccine. Putin added, “Me too.”

Putin said the two countries agree on many issues, calling Argentina “one of Russia’s key partners in Latin America.”

Argentine President Fernández Travels To China To Meet With Xi

Fernández and other top Argentine officials signed agreements for $23.7 billion in Chinese financing, including investments and infrastructure projects.

The funding will be disbursed in two parts: one, which is already approved, will provide Argentina with $14 billion for 10 infrastructure projects; the second, for $9.7 billion, will finance the South American nation’s integration into the Belt and Road.

There are three joint Chinese-Argentine projects that were reportedly at the top of Fernández’s list: creating 5G networks, developing Argentina’s lithium industry, and building the Atucha III nuclear power plant.

Argentina and China signed a comprehensive memorandum of understanding, including 13 documents for cooperation in areas such as green energy, technology, education, agriculture, communication, and nuclear energy.

Fernández and Xi discussed ways to “strengthen relations of political, commercial, economic, scientific, and cultural cooperation between both countries,” according to an  of the meeting.

The two leaders apparently hit it off very well, with Fernández telling Xi, “If you were Argentine, you would be a Peronist.”

Argentina’s incorporation into the Belt and Road comes mere weeks after Nicaragua joined the initiative in January, and Cuba in December. Latin America’s growing links with China and Russia show how the increasingly multipolar international system offers countries in the Global South new potential allies who can serve as bulwarks against and alternatives to Washington’s hegemony. While right-wing leaders in Latin America keep looking north to the United States as their political compass, progressive governments are reaching across the ocean to the Eurasian powers of China, Russia, and Iran, building new international alliances that weaken Washington’s geopolitical grip over a region that the US president still insists is its “front yard.”