Can Peace Be Researched?

13 Dec 2021 – I was reminded recently that a 55-year-old TV program about PRIO and peace research is currently available on the website of NRK, Norway’s public radio and TV company. You can access it here. 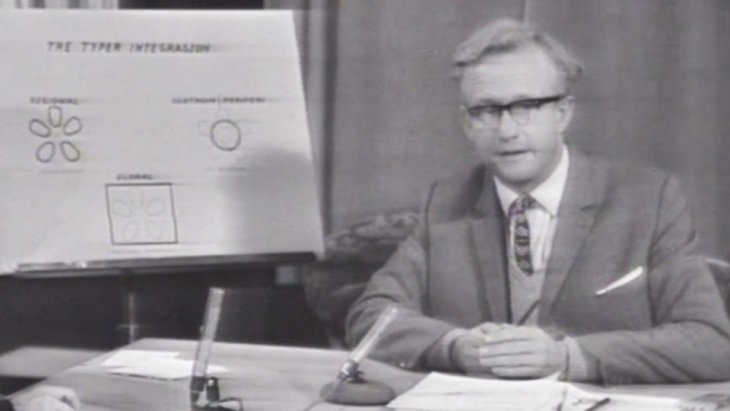 Johan Galtung in the TV programme from 1966.

The two-part program was broadcast on 18 and 25 October 1966. NRK does not have any information about when it was shot, but papers in PRIO’s old files indicate that it was probably earlier in the fall, while a long sequence from an inter-nation simulation exercise was recorded in the spring the same year [1].

The program is moderated by Mette Janson with extensive narration by PRIO’s founder and then director, Johan Galtung. It provides a broad and informative overview of PRIO’s research agenda in the early years. Except for a short interview in English with Malvern Lumsden, it’s all in Norwegian, of course.

A number of participants are named in the program, but many are not, and NRK has no additional names on file. I have been able to identify most of them (see footnote 1). And in case you wonder, I appear anonymously as the editor of World Times in the simulation sequence at 21:40 into the second part.

It is quite remarkable that NRK devoted 2 x 35 minutes to a program about peace research. At the time, Norway had a single TV channel (and a single radio channel). The total daily transmission time on weekdays was a little more than 4 hours. Nevertheless, a 35 minute sequence in prime time was devoted to a presentation of academic pursuit in a new and untested branch of social science. In the interest of transparency, I hasten to add that Mette Janson was my second cousin, while disclaiming any credit for acquiring so much publicity for PRIO.

Although only half of all Norwegian households had access to TV in 1966, we may assume that a sizeable fraction of what at the time would have been called ‘the enlightened public’ would have watched the program.

The program is a product of its time. Mette Janson’s interview style is polite and largely deferential. ‘Hardtalk’ or even investigative journalism were not yet on NRK’s agenda. All those interviewed are addressed in the polite form (De, Dem), which has gone almost extinct in the half-century that has passed since then. Although two of PRIO’s pioneer women researchers present their findings at some length, a generic researcher is routinely referred to as ‘he’, as are members of Parliament (‘Stortingsmenn’). The villages in the Norwegian aid project area in Kerala are characterized as ‘backward’ by social anthropologist Arne Martin Klausen, and early civilizations are labelled ‘primitive’ by Johan Galtung (but they are credited with being less warlike), both acceptable terms at the time.

PRIO was founded in 1959 as a section of the Institute for Social Research and got a boost in 1964 with the first grants from the publicly funded Council for Conflict and Peace Research. But by 1966, PRIO had become an independent institute and experienced rapid growth. The TV program presents a research environment with enthusiasm, optimism, and increasing self-confidence.

The TV program presents a research environment with enthusiasm, optimism, and increasing self-confidence.

Naturally, the entrepreneurial Johan Galtung plays the main role in the program. He lectures on 30 models of peace and present his model of a stratified world order and studies of international news, both precursors of some of his early and still most-cited articles in Journal of Peace Research.

As one of the students who sat at his feet at the time, I can only hope that the program conveys some of his magic appeal as a researcher and as a public speaker. I am tempted to think of him as a benign version of the Pied Piper of Hamelin, who kidnapped all the town’s children with his alluring tune.  With the obvious caveat that most of Galtung’s young followers were only captured by the tune for a time and eventually left the piper, some quickly, others after several years. It is also typical of Galtung’s generosity at the time that he encouraged younger collaborators to present their own research; a case in point being Ottar Hellevik, 23 at the time, and eventually professor of political science at the University of Oslo.

[1] For nerds: A memo in Norwegian with extensive details about names, when they appear in the program, and other matters, is available HERE.

Nils Petter Gleditsch, former director of the Peace Research Institute Oslo, is a Norwegian sociologist, political scientist, and a research professor at PRIO. In 2009 he was awarded the annual Award for Outstanding Research by the Research Council of Norway.