Pipeline Politics and the Ukraine Crisis

Why Nord Stream 2 Is a Key Part of the Impasse 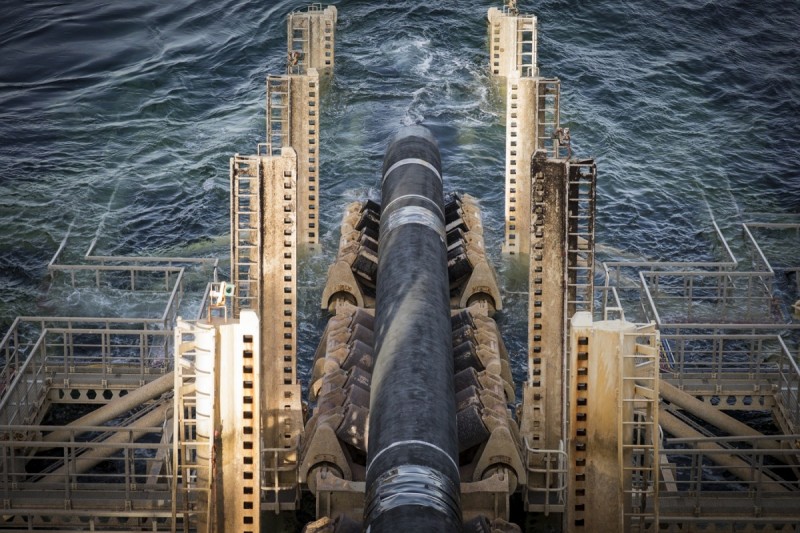 “Canada is supporting Ukraine … because we have a clear and urgent national interest in the situation there.”
—Canadian Deputy Prime Minister Chrystia Freeland, January 26, 2022

6 Feb 2022 – Amid escalating tensions between the United States, NATO and Russia, all eyes are on Ukraine. Canada’s Deputy Prime Minister Chrystia Freeland describes it as “a struggle between democracy and authoritarianism.” But Nord Stream 2, a pipeline built to bring Russian gas under the Baltic Sea directly to Germany, is an integral part of the story.

On January 27, US Under Secretary for Political Affairs, Victoria Nuland, asserted, “If Russia invades Ukraine one way or another … we will work with Germany to ensure it [the pipeline] does not move forward.” Delayed by US threats and sanctions, Nord Stream 2 highlights why countries are challenging the leadership of the Biden administration.

Since the 1960s when Europe first began importing Russian gas, Washington perceived Russian energy as a threat to US leadership and Europe’s energy security. More recently, with fracking, the US has become the world’s largest gas producer and a major exporter of LNG (liquefied natural gas). It wants to muscle in on Europe’s huge market, displacing Russian gas. With Nord Stream 2 completed and filled while it awaits German regulatory approval, the stakes are high.

Soon after pipeline construction began in 2018, the US passed a law threatening sanctions on the Swiss ship laying the pipe. The Swiss pulled out and two Russian vessels completed the line despite sanctions. The US threatened German contractors too, but Germany stood firm.

Nord Stream 2, like its predecessor Nord Stream 1, began as a joint venture (51 percent Russia’s Gazprom, 49 percent Royal Dutch Shell as well as Austrian, French and German companies). Then Poland’s government agency responsible for monopoly regulation forced European partners to relinquish their share, creating another delay. The European companies gave up their shareholding but remained as equivalent financial investors in the pipeline.

Upon the Europeans relinquishing their shareholding, Gazprom became the sole pipeline owner. It is also the world’s largest gas supplier, with a gas pipeline monopoly in Russia. Gazprom wants to deliver its own gas via its pipeline to Europe. The EU has maintained since 2009 that pipeline operators, in order to encourage market competition, cannot own the gas they carry. After construction of Nord Stream 2 began, the EU extended its rules to new marine pipelines originating abroad.

Nord Stream 2 was the only pipeline affected. While those pipelines completed prior to May 2019 were exempt, its completion was delayed by US sanctions on pipelaying. Gazprom claimed discrimination and appealed. In August 2021, a German court rejected the appeal. Gazprom then appealed to Germany’s Supreme Court. 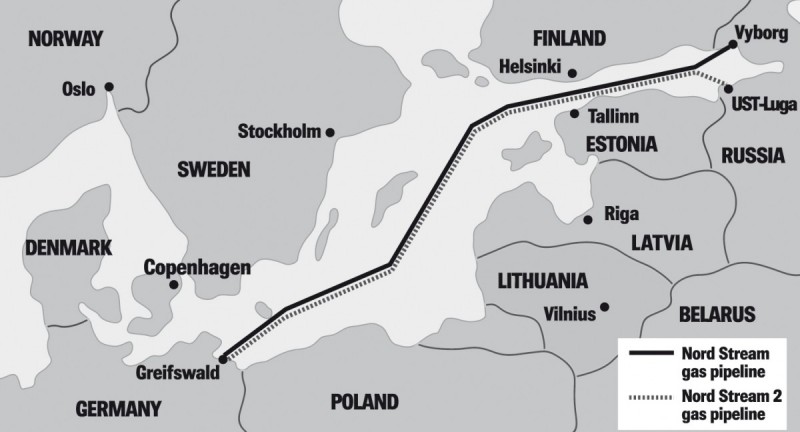 German industrialists are desperate for Russian gas. Germany has only 17 days of gas supply in storage. Volatile short-term spot prices have compounded their woes. EU gas imports have increasingly shifted from long-term contracts with prices indexed to crude oil toward short-term deals by multiple traders in spot markets.

In 2020, spot prices were roughly half those of Gazprom’s long-term contracts. They surged as much as sevenfold in 2021, reflecting a mix of factors. On the demand side, economic revival from the pandemic boosted demand for gas in Asia as well as Europe. On the supply side, green sources of energy diminished in central Europe because of cloudy windless days. With the decommissioning of coal and nuclear power stations, utilities turned to natural gas.

Russia is a petro-state. It’s the world’s single largest exporter of natural gas, and the second largest oil exporter—just behind Saudi Arabia. Pipelines and sea routes to market are vital to its economy. Russia wants to sell oil and gas in Asia and Europe, and they want to buy it. Nord Stream 2 makes commercial sense. It incurs no transit fees. The route to market is much shorter than aging pipelines via Ukraine. For its part, Ukraine depends on transit fees from gas shipped through these pipelines.

Nord Stream 2 remains controversial, bitterly opposed by Poland and Ukraine who presume it will reduce volumes and transit fees on pipelines through their countries. Others (notably Germany, Austria, Croatia, Czech Republic, Hungary, Italy) want it. Germany, which carries huge weight in the EU, sees gas as a transition fuel after phasing out nuclear and coal. As Canadian foreign minister, Freeland voiced “significant concerns” about Nord Stream 2.

Numerous hurdles during and since construction have delayed the pipeline’s certification. The most recent forced its Swiss operating company to form a German subsidiary for the section in German waters. Upon eventual certification, Germany will become Europe’s main entry point for Russian gas.

The current crisis between Russia and the US/NATO has been brewing for many years. With the dissolution of the Soviet Union, NATO expanded membership to Eastern Europe. NATO facilitates US leadership, keeping European countries on its side against Russia. From a Russian viewpoint, NATO is provocative and threatening.

Part of the agreement underpinning the USSR’s dissolution was Western assurance that it would not expand into Russia’s sphere of influence, a pledge NATO most recently violated by stationing troops, ships and planes along Russia’s borders. The West accuses Russia of interference in Ukraine. Russia points to a 2014 Western-inspired coup in Ukraine and legitimate grievances of Russian-speakers in the breakaway Donbas republics. I document the two narratives in my book Oil and World Politics.

In December 2021, Russia presented draft treaties to the US and NATO, demanding a complete overhaul of Europe’s security architecture. Russia stressed the principle of indivisible and equal security for all countries, as agreed by all 56 members of the Organization for Security and Co-operation in Europe (OSCE) at Istanbul (1999) and reaffirmed at Astana (2010). Countries expressly agreed not to strengthen their security at the expense of others. In January, Russia wrote to all signatory countries, including Canada, demanding clear answers on how they each intended to fulfil these obligations in the current circumstances. 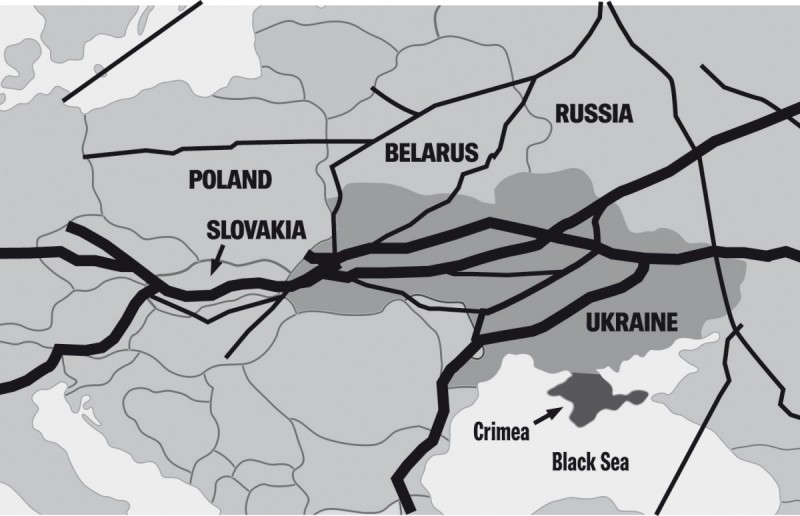 Russian President Vladimir Putin warned that if the West continued its aggressive policies (NATO’s expansion and missile deployment in eastern Europe), Russia would take ‘military-technical’ reciprocal measures. In his words, “They have pushed us to a line that we can’t cross.”

Russia’s initiative put the cat among the pigeons. A succession of high-level meetings occurred between Russia and the US, NATO and OSCE. On January 26, Washington presented written responses, seeking to narrow the debate to Ukraine and alleging the Russians were poised to invade it. Russia insisted repeatedly it would not initiate an invasion but would support Donbas if the latter were attacked.

France, Germany and Italy balked because the sanctions would backfire on their economies. They appeared unconvinced Russia intended to attack unless provoked. A flurry of high-level bilateral discussions with Russia followed.

Significantly, on January 26, representatives of France, Germany, Russia and Ukraine confirmed support for the 2015 Minsk II agreement and an unconditional ceasefire. Minsk-II requires Ukraine to negotiate with the two Donbas republics on autonomy within a federalized Ukraine but, thus far, no negotiations have been held.

The EU imports 40 percent of its gas from Russia. For Russia, the routes through Ukraine and Poland are unreliable, because of hostility in both countries. Ukraine has a long-term deal with Gazprom for gas transit until 2024. Ukraine earns big transit fees, roughly US$2 billion per year, and desperately wants to keep them. For its internal market, Ukraine buys Russian gas indirectly from Poland, Romania and Slovakia.

Whatever happens with Western sanctions, Russia has a strategic new market in China. Russia’s Power of Siberia pipeline began exporting gas from east Siberia to northeast China two years ago. The two countries have agreed to build a second line, Power of Siberia 2. It will bring gas from the Yamal Peninsula in the Russian Arctic to China’s northeast. That means Yamal gas will be able to flow to China as easily as to Europe.

The current situation is dangerous and could easily escalate. Nord Stream 2 is critically important but national security trumps all. Security can only be achieved if it is universal. US efforts to contain Russia and maintain leadership over Europe are not working. It’s wake-up time for Canada, too. The world has become multi-polar and Nord Stream 2 is a fulcrum at the centre of the current crisis.

John Foster is the author of Oil and World Politics: The Real Story of Today’s Conflict Zones (Lorimer Books, 2018).