Navigating our Humanity: Ilan Pappé on the Four Lessons from Ukraine 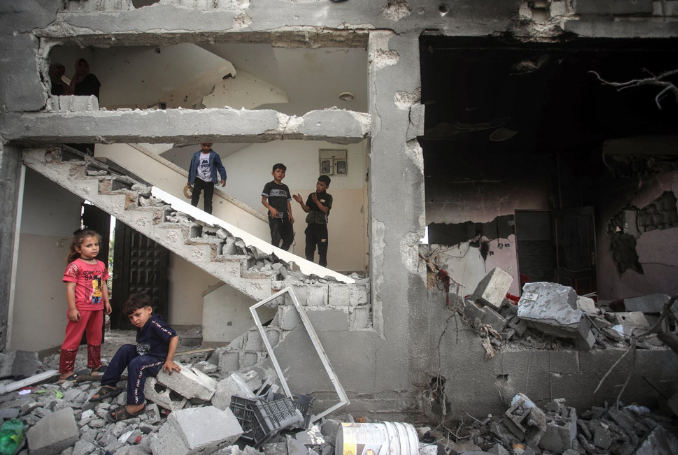 4 Mar 2022 – The USA Today reported that a photo that went viral about a high-rise in the Ukraine being hit by Russian bombing turned out to be a high-rise from the Gaza Strip, demolished by the Israeli Air Force in May 2021. A few days before that, the Ukrainian Foreign Minister complained to the Israeli ambassador in Kiev that “you’re treating us like Gaza”; he was furious that Israel did not condemn the Russian invasion and was only interested in evicting Israeli citizens from the state (Haaretz, February 17, 2022). It was a mixture of reference to the Ukrainian evacuation of Ukrainian spouses of Palestinian men from the Gaza Strip in May 2021, as well as a reminder to Israel of the Ukrainian president’s full support for Israel’s assault on the Gaza Strip in that month (I will return to that support towards the end of this piece).

Israel’s assaults on Gaza should, indeed, be mentioned and considered when evaluating the present crisis in the Ukraine. It is not a coincidence that photos are being confused – there are not many high-rises that were toppled in the Ukraine, but there is an abundance of ruined high-rises in the Gaza Strip. However, it is not only the hypocrisy about Palestine that emerges when we consider the Ukraine crisis in a wider context; it is the overall Western double standards that should be scrutinized, without, for one moment, being indifferent to news and images coming to us from the war zone in the Ukraine: traumatized children, streams of refugees, sights of buildings ruined by bombing and the looming danger that this is only the beginning of a human catastrophe at the heart of Europe.

At the same time, those of us experiencing, reporting and digesting the human catastrophes in Palestine cannot escape the hypocrisy of the West and we can point to it without belittling, for a moment, our human solidarity and empathy with victims of any war. We need to do this, since the moral dishonesty underwriting the deceitful agenda set by the Western political elites and media will once more allow them to hide their own racism and impunity as it will continue to provide immunity for Israel and its oppression of the Palestinians. I detected four false assumptions which are at the heart of the Western elite’s engagement with the Ukraine crisis, so far, and have framed them as four lessons.

Lesson One: White Refugees are Welcome; Others Less So

The unprecedented collective EU decision to open up its borders to the Ukrainian refugees, followed by a more guarded policy by Britain, cannot go unnoticed in comparison to the closure of most of the European gates to the refugees coming from the Arab world and Africa since 2015.  The clear racist prioritization, distinguishing between life seekers on the basis of color, religion and ethnicity is abhorrent, but unlikely to change very soon. Some European leaders are not even ashamed to broadcast their racism publicly as does the Bulgarian Prime Minister, Kiril Petkov:

He is not alone. The Western media talks about “our kind of refugees” all the time, and this racism is manifested clearly on the border crossings between the Ukraine and its European neighbours. This racist attitude, with strong Islamophobic undertones, is not going to change, since the European leadership is still denying the multi-ethnic and multicultural fabric of societies all over the continent. A human reality created by years of European colonialism and imperialism that the current European governments deny and ignore and, at the same time, these governments pursue immigration policies that are based on the very same racism that permeated the colonialism and imperialism of the past.

Lesson Two: You Can Invade Iraq but not the Ukraine

The Western media’s unwillingness to contextualize the Russian decision to invade within a wider – and obvious – analysis of how the rules of the international game changed in 2003 is quite bewildering. It is difficult to find any analysis that points to the fact that the US and Britain violated international law on a state’s sovereignty when their armies, with a coalition of Western countries, invaded Afghanistan and Iraq.  Occupying a whole country for the sake of political ends was not invented in this century by Vladimir Putin; it was introduced as a justified tool of policy by the West.

The analysis also fails to highlight some of Putin’s valid points about the Ukraine; which by no means justify the invasion, but need our attention even during the invasion.  Up to the present crisis, the progressive Western media outlets, such as The Nation, the Guardian, the Washington Post etc., warned us about the growing power of neo-Nazi groups in the Ukraine that could impact the future of Europe and beyond. The same outlets today dismiss the significance of neo-Nazism in the Ukraine.

“Today, increasing reports of far-right violence, ultra nationalism and erosion of basic freedoms are giving the lie to the West’s initial euphoria. There are neo-Nazi pogroms against the Roma, rampant attacks on feminists and LGBT groups, book bans, and state-sponsored glorification of Nazi collaborators.”

Two years earlier, the Washington Post (June 15, 2017) warned, very perceptively, that a Ukrainian clash with Russia should not allow us to forget about the power of neo-Nazism in the Ukraine:

“As Ukraine’s fight against Russian-supported separatists continues, Kiev faces another threat to its long-term sovereignty: powerful right-wing ultra-nationalist groups. These groups are not shy about using violence to achieve their goals, which are certainly at odds with the tolerant Western-oriented democracy Kiev ostensibly seeks to become.”

However, today, the Washington Post adopts a dismissive attitude and calls such a description as a “false accusation”:

“Operating in Ukraine are several nationalist paramilitary groups, such as the Azov movement and Right Sector, that espouse neo-Nazi ideology. While high-profile, they appear to have little public support. Only one far-right party, Svoboda, is represented in Ukraine’s parliament, and only holds one seat.”

The previous warnings of an outlet such as The Hill (November 9, 2017), the largest independent news site in the USA, are forgotten:

“There are, indeed, neo-Nazi formations in Ukraine. This has been overwhelmingly confirmed by nearly every major Western outlet. The fact that analysts are able to dismiss it as propaganda disseminated by Moscow is profoundly disturbing. It is especially disturbing given the current surge of neo-Nazis and white supremacists across the globe.”

Lesson Four: Hitting High-rises is only a War Crime in Europe

The Ukrainian establishment does not only have a connection with these neo-Nazi groups and armies, it is also disturbingly and embarrassingly pro-Israeli.  One of President Volodymyr Zelensky’s first acts was to withdraw the Ukraine from the United Nations Committee on the Exercise of the Inalienable Rights of the Palestinian People – the only international tribunal that makes sure the Nakba is not denied or forgotten.

The decision was initiated by the Ukrainian President; he had no sympathy for the plight of the Palestinian refugees, nor did he consider them to be victims of any crime. In his interviews after the last barbaric Israeli bombardment of the Gaza Strip in May 2021, he stated that the only tragedy in Gaza was the one suffered by the Israelis.  If this is so, than it is only the Russians who suffer in the Ukraine.

But Zelensky is not alone. When it comes to Palestine, the hypocrisy reaches a new level. One empty high-rise hit in the Ukraine dominated the news and prompted deep analysis about human brutality, Putin and inhumanity. These bombings should be condemned, of course, but it seems that those leading the condemnation among world leaders were silent when Israel flattened the town of Jenin in 2000, the Al-Dahaya neighborhood in Beirut in 2006 and the city of Gaza in one brutal wave after the other, over the past fifteen years. No sanctions, whatsoever, were even discussed, let alone imposed, on Israel for its war crimes in 1948 and ever since. In fact, in most of the Western countries which are leading the sanctions against Russia today, even mentioning the possibility of imposing sanctions against Israel is illegal and framed as anti-Semitic.

Even when genuine human solidarity in the West is justly expressed with the Ukraine, we cannot overlook its racist context and Europe-centric bias. The massive solidarity of the West is reserved for whoever is willing to join its bloc and sphere of influence. This official empathy is nowhere to be found when similar, and worse, violence is directed against non-Europeans, in general, and towards the Palestinians, in particular.

We can navigate as conscientious persons between our responses to calamities and our responsibility to point out hypocrisy that in many ways paved the way for such catastrophes. Legitimizing internationally the invasion of sovereign countries and licensing the continued colonization and oppression of others, such as Palestine and its people, will lead to more tragedies, such as the Ukrainian one, in the future, and everywhere on our planet.

Professor Ilan Pappé was born in Haifa, Israel in 1954. He graduated from the Hebrew University in Jerusalem in 1979 and received his Ph.D. from the University of Oxford in 1984. He taught at the University of Haifa until 2006 and then moved to the University of Exeter in the UK, where he is currently the director of the European Center for Palestine Studies. Pappe is the author of 20 books, among them The Ethnic Cleansing of Palestine (2007) and On Palestine, with Noam Chomsky (2010).

One Response to “Navigating our Humanity: Ilan Pappé on the Four Lessons from Ukraine”