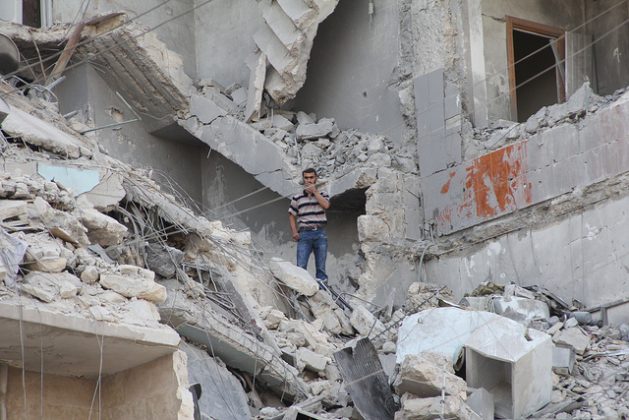 “Today the poverty rate in Syria is an unprecedented 90 percent; 14.6 million people in Syria depend on humanitarian aid.” Credit: Zak Brophy/IPS

22 Mar 2022 – “Hundreds of thousands have been killed, more than half of the pre-war population – somewhere in the order of 22 million – have been displaced. More than 100,000 are missing or forcibly disappeared….

“Syria’s cities and infrastructure have been destroyed. Today the poverty rate in Syria is an unprecedented 90 percent; 14.6 million people in Syria depend on humanitarian aid.”

This is how one of the top UN-appointed human rights investigators on 9 March 2022 described the Syrian unfolding humanitarian catastrophe.

Presenting the latest UN Human Rights Council-mandated report on the 11-year-old conflict, Paulo Pinheiro, Chair of the Independent International Commission of Inquiry on the Syrian Arab Republic, talked about the “devastating” impact on communities.

In Syria’s northwest, many Syrians forced from their homes “are still living in flimsy tents, stuck in snow, rain, mud,” Pinheiro added.

“Make no mistake that violence against civilians continues across the country, from bombardment in the northwest, north and northeast, to targeted killings, unlawful detention and torture…These are the abysses faced by the Syrian people.”

According to the report, covering the period July to December 2021, there were increased bombardments in the northwest of the country and skirmishes between the Turkish-backed Syrian National Army (SNA) and the Syrian Democratic Forces in the northeast.

The Commission documented “grave violations of fundamental human rights and international humanitarian law by parties to the conflict, including war crimes and ongoing patterns of crimes against humanity.

“In Idlib and western Aleppo in the northwest, residential areas were also shelled indiscriminately from the ground by pro-government forces.”

Previous reports by the Commission of Inquiry have warned about a worsening humanitarian situation across Syria because of fighting and insecurity, but Russia’s invasion of Ukraine on 24 February has heightened concerns that critical wheat imports may now be affected, said Commissioner Hanny Megally: “We’re already seeing inflation at 140 per cent at the beginning of this year (and) it’s gone up.

“We’re seeing the State already beginning to ration. We’re seeing the prices of commodities, basic commodities and fuel going up…Most of Syria’s imported wheat is coming from Ukraine or Russia, so we are very concerned that the war in Ukraine will have a bad impact on Syria.”

With Syria “teetering on collapse”, the Commissioner urged a review of sanctions imposed on Syria on a country-by-country basis.

“Sanctions …should facilitate humanitarian assistance (but) this is not really working very well,” said Megally, who warned that many countries were so fearful of breaching the embargoes that they were practising “overcompliance”, leaving Syrian communities short of essential commodities.

War in Syria, a carnage

Last year, marking its tenth year, the UN secretary general, António Guterres, classified the war in Syria as a “carnage.” This year, Guterres said that Syria’s 11 years of brutal fighting has come at an “unconscionable human cost”, subjecting millions there to human rights violations on a “massive and systematic scale.”

“The destruction that Syrians have endured is so extensive and deadly that it has few equals in modern history.”

The World Health Organization (WHO) reported that only half of the 550 health facilities in the region remain open nearly a decade after the war began.

“Syria represents one of the worst cases of healthcare being affected by conflict, according to the agency, with a total of 494 attacks recorded between 2016-2019, mainly in the northwest.”

During that same period, 470 people were killed in attacks on health facilities.

“What is troubling is that we‘ve come to a point where attacks on health – something the international community shouldn‘t tolerate – are now taken for granted; something we have become accustomed to. ”, said Richard Brennan, WHO Regional Emergency Director in the Eastern Mediterranean. “And they are still taking place”.

As the Syrian war has driven poverty and hunger to levels higher than at any previous point, UN Special Envoy Geir Pedersen told the Security Council on 25 February 2022.

“After 10 years of crisis, life is harder than ever for displaced Syrians. Millions of Syrians have been forced to flee their homes since 2011, seeking safety as refugees in Lebanon, Turkey, Jordan and beyond, or displaced inside Syria. As the crisis continues, hope is fading. With the devastating impact of the pandemic and increasing poverty, every day is an emergency for Syrians forced to flee.”

According to the UN Refugee agency (UNHCR) already last year millions of Syrians have escaped across borders, in what has become “the world’s largest refugee crisis in decades.”

The tragic frustration of the Arab Spring

“Today, March 15, marks the 11th anniversary of the start of the Syrian revolution. It was on this day in 2011 that Syrian government forces opened fire on peaceful pro-democracy protesters in the southern town of Daraa,” Human Rights Watch reminded.

“The violent crackdown sparked nationwide protests and growing demands for the resignation of Syria’s president Bashar al-Assad. As the unrest spread, the government crackdown intensified, eventually descending into civil war. It’s a war that has been largely forgotten, although it bears similar hallmarks to the horrors inflicted on Ukraine in Russia‘s renewed invasion,” the international human rights defender organisation added.

“Yet, while the US and Europe responded with unprecedented urgency to the crisis in Ukraine, waiving visa regulations for people fleeing the conflict and welcoming Ukrainian refugees with compassion and open arms, people fleeing other wars and crises like the one in Syria have been facing unlawful and violent pushbacks at borders.”

Nevertheless, Syrian activists and refugees have often been among the first to demonstrate solidarity with other people facing crisis, offering to volunteer in Ukraine, too, said Human Rights Watch.

“So, even though the world largely abandoned Syrians to face down attacks from multiple abusive armed actors, this day [15 March 2022] should be a reminder that Syrians’ experience of violent rights violations is the same as Ukrainians’, and they deserve the same continued protections and support too.”

Tragically, the hopes of the Arab Spring have been crushed. Authoritarian regimes still reign in the region. And massive local and foreign military attacks continue, with weapons pouring in Syria.

Confusing reports circulate about the key actors–Russia, Turkey, Iran, the United States and Europe. All that has failed. Yet, the brutal killing of civilians goes on.