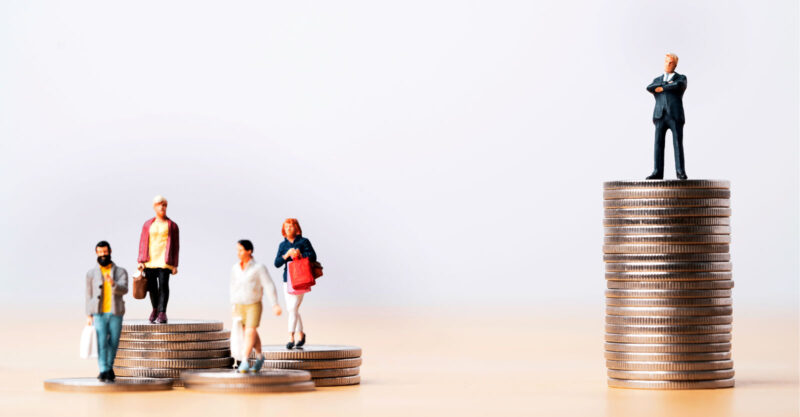 Federal data released Wednesday shows that U.S. corporate profits jumped 25% to record highs in 2021 even as the coronavirus pandemic wreaked havoc on the nation’s economy, disrupting supply chains, hammering low-wage workers, and helping to push inflation to levels not seen in decades.

“Megacorporations are cashing in and getting richer—and consumers are paying the price.”

According to the Commerce Department’s Bureau of Economic Analysis (BEA), domestic corporate profits adjusted for inventory valuation and capital consumption reached $2.8 trillion last year, up from $2.2 trillion in 2020—the largest increase since 1976.

Employee compensation also increased in 2021, just not at the pace of corporate profits. Citing the new BEA data, Bloomberg reported that “employee compensation rose 11%, but the so-called labor share of national income—essentially, the portion that’s paid out as wages and salaries—fell back to pre-pandemic levels.”

“That tends to undermine the argument that soaring labor costs are what’s driving the current surge in inflation, a case the Federal Reserve is starting to make as it accelerates interest-rate increases,” Bloomberg noted.

Lindsay Owens, executive director at the Groundwork Collaborative, argued in a statement that the new profit figures show that corporate America is successfully weathering inflationary pressures across the economy by pushing higher costs onto consumers—a tactic some CEOs have openly touted during recent calls with investors.

“CEOs can’t stop bragging on corporate earnings calls about jacking up prices on consumers to keep their profits soaring—and today’s annual profit data shows just how well their inflation strategy is working,” Owens said. “These megacorporations are cashing in and getting richer—and consumers are paying the price.”

A number of major U.S. corporations, from Amazon to Starbucks to the Dollar Tree, have announced in recent months that they’re moving to hike prices on consumers, often blaming the broader “inflationary environment.” Outgoing Starbucks CEO Kevin Johnson—who saw his compensation soar by 39% to $20.4 million in 2021—said during his company’s fourth-quarter earnings call that impending price increases are aimed at mitigating “cost pressures including inflation.”

“Pathetically, large corporations are using the war in Ukraine and the pandemic as an excuse to raise prices.”

But recent survey data indicates that Americans aren’t buying the companies’ justifications for higher costs. A Data for Progress poll released last month found that a majority of U.S. voters believe that “large corporations are taking advantage of the pandemic to raise prices unfairly on consumers and increase profits,” a position also taken by progressive members of Congress.

During a separate hearing Wednesday on President Joe Biden’s latest budget proposal, Sanders said that “to a significant degree, pathetically, large corporations are using the war in Ukraine and the pandemic as an excuse to raise prices significantly to make record-breaking profits.”

“This is taking place at the gas pump, at the grocery store, and virtually every other sector of the economy,” said the Vermont senator. “This is why we need a windfall profits tax, and why this committee will be holding a hearing on Tuesday of next week on the unprecedented level of corporate greed that is taking place in America today.”