Pakistan’s Prime Minister Imran Khan has been ousted from power after losing a no-confidence vote in his leadership. 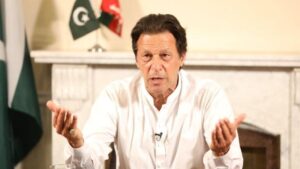 Imran Khan becomes the first Pakistani prime minister to be ousted by a no-confidence vote.

10 Apr 2022 – The vote was held past midnight after opposition parties brought a motion against him, following days of drama.

The motion was first brought last week, but the former cricket star blocked it by dissolving parliament.

Sunday’s vote took place after the country’s Supreme Court ruled in favour of opposition parties and said that Mr Khan had acted unconstitutionally.

Opposition leader Shehbaz Sharif – who is expected to be chosen as the new prime minister on Monday – said Pakistan and its parliament were “finally freed from a serious crisis”, adding in a tweet: “Congratulations to the Pakistani nation on a new dawn.”

If voted in by parliament, Mr Sharif – a long-time rival of Mr Khan and brother of former three-time Prime Minister Nawaz Sharif – would be able to hold power until October 2023, when the next election is due to be held.

His supporters are expected to take to the streets on Sunday evening.

Mr Khan has previously said he would not recognise an opposition government, claiming – without evidence – that there was a US-led conspiracy to remove him because of his refusal to stand with Washington on issues against Russia and China.

He has repeatedly said that Pakistan’s opposition parties are working with foreign powers. Members of his party (PTI) left the building just ahead of the vote, also insisting he was the victim of an international conspiracy.

The US has said there is “no truth” in these allegations, and Mr Khan has never provided any evidence.

What Led to His Downfall?

When Imran Khan was elected prime minister in 2018, he seemed to have almost everything in his favour.

A national hero from his cricketing days, he had transformed into a charismatic politician and, after years of struggle, managed to supplant the two rival established political dynasties that had dominated Pakistan for decades.

He emerged as a fresh force, with vibrant rallies full of catchy songs which, along with his huge social media presence, amplified his staunch anti-corruption message. Mr Khan promised to bring “change” to the country, creating a “new Pakistan”.

No prime minister has ever completed a full five-year parliamentary tenure in Pakistan, and Imran Khan looked as though he could well be the first.

The reason his position appeared so secure, however, also helps explain his downfall. Both sides deny it, but it’s widely acknowledged he came to power with the help of Pakistan’s powerful army and intelligence services – and now he has fallen out with them.

The vote was initially due to take place in parliament last Sunday, but deputy speaker Qasim Suri – a member of Mr Khan’s political party – swiftly blocked the motion, saying it showed “foreign interference”. Mr Suri also said that it went against the constitution, which calls for loyalty to the state.

Mr Khan’s government went on to dissolve parliament and called for a snap election to be held. This angered several opposition members, with some accusing the prime minister of treason for blocking the vote.

Opposition figures submitted a petition to the Supreme Court to assess the situation.

On Thursday, Pakistan’s top court ruled that Mr Khan’s decision to stop the vote from going ahead was unconstitutional. It ordered that the no-confidence vote should go ahead again.

However an impasse over the vote continued well into Saturday evening, prompting the speaker of the lower house of parliament – Asad Qaiser, an ally of Mr Khan – to resign.

Who is the ruling party in Pakistan? Pakistan’s current ruling party is Pakistan Tehreek-e-Insaf (PTI), which is one of the three major political parties of Pakistan. It is now headed by former cricketer-turned-politician and PTI head Imran Khan, who took power as Prime Minister in 2018 after PTI emerged as the dominant party in government following the 2013 general elections.

Who are the opposition? The opposition is headed by the Pakistan Muslim League-N (PML-N) and the Pakistan Peoples Party (PPP) — two usually feuding dynastic groups that dominated national politics for decades until prime minister Imran Khan forged a coalition against them.