The US professor, now 93, on the climate catastrophe and the threat of nuclear war. 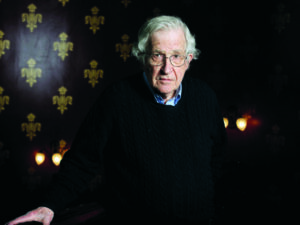 6 Apr 2022 – It was as a ten-year-old that Noam Chomsky first confronted the perils of foreign aggression. “The first article that I wrote for the elementary school newspaper was on the fall of Barcelona [in 1939],” Chomsky recalled when we spoke recently via video call. It charted the advance of the “grim cloud of fascism” across the world. “I haven’t changed my opinion since, it’s just gotten worse,” he sardonically remarked. Due to the climate crisis and the threat of nuclear war, Chomsky told me, “we’re approaching the most dangerous point in human history… We are now facing the prospect of destruction of organised human life on Earth.”

At the age of 93, as perhaps the world’s most cited living scholar, Chomsky could be forgiven for retreating from the public sphere. But in an era of permanent crisis, he retains the moral fervour of a young radical – more preoccupied with the world’s mortality than his own. He is a walking advertisement for Dylan Thomas’s injunction – “Do not go gentle into that good night” – or for what Chomsky calls “the bicycle theory: if you keep going fast, you don’t fall off”.

[See also: Francis Fukuyama: We could be facing the end of “the end of history”]

The occasion for our conversation is the publication of Chronicles of Dissent, a collection of interviews between Chomsky and the radical journalist David Barsamian from 1984 to 1996. But the backdrop is the war in Ukraine – a subject about which Chomsky is unsurprisingly voluble.

“It’s monstrous for Ukraine,” he said. In common with many Jews, Chomsky has a family connection to the region: his father was born in present-day Ukraine and emigrated to the US in 1913 to avoid serving in the tsarist army; his mother was born in Belarus. Chomsky, who is often accused by critics of refusing to condemn any anti-Western government, unhesitatingly denounced Vladimir Putin’s “criminal aggression”.

But he added: “Why did he do it? There are two ways of looking at this question. One way, the fashionable way in the West, is to plumb the recesses of Putin’s twisted mind and try to determine what’s happening in his deep psyche.

“The other way would be to look at the facts: for example, that in September 2021 the United States came out with a strong policy statement, calling for enhanced military cooperation with Ukraine, further sending of advanced military weapons, all part of the enhancement programme of Ukraine joining Nato. You can take your choice, we don’t know which is right. What we do know is that Ukraine will be further devastated. And we may move on to terminal nuclear war if we do not pursue the opportunities that exist for a negotiated settlement.”

How does he respond to the argument that Putin’s greatest fear is not encirclement by Nato but the spread of liberal democracy in Ukraine and Russia’s “near abroad”?

“Putin is as concerned with democracy as we are. If it’s possible to break out of the propaganda bubble for a few minutes, the US has a long record of undermining and destroying democracy. Do I have to run through it? Iran in 1953, Guatemala in 1954, Chile in 1973, on and on… But we are supposed to now honour and admire Washington’s enormous commitment to sovereignty and democracy. What happened in history doesn’t matter. That’s for other people.

“What about Nato expansion? There was an explicit, unambiguous promise by [US secretary of state] James Baker and president George HW Bush to Gorbachev that if he agreed to allow a unified Germany to rejoin Nato, the US would ensure that there would be no move one inch to the east. There’s a good deal of lying going on about this now.”

Chomsky, who observed in 1990 that “if the Nuremberg laws were applied, then every postwar American president would have been hanged”, spoke witheringly of Joe Biden.

“It’s certainly right to have moral outrage about Putin’s actions in Ukraine,” he said of Biden’s recent declaration that the Russian president “cannot remain in power”. “But it would be even more progress to have moral outrage about other horrible atrocities… In Afghanistan, literally millions of people are facing imminent starvation. Why? There’s food in the markets. But people who have little money have to watch their children starve because they can’t go to the market to buy food. Why? Because the United States, with the backing of Britain, has kept Afghanistan’s funds in New York banks and will not release them.”

[See also: Why Thomas Piketty is optimistic about the left’s future]

Chomsky’s contempt for the hypocrisies and contradictions of US foreign policy will be familiar to anyone who has read one of his many books and pamphlets (his first political work, American Power and the New Mandarins, published in 1969, foretold the US’s defeat in Vietnam). But he is now perhaps most animated when discussing Donald Trump’s possible return and the climate crisis.

“I’m old enough to remember the early 1930s. And memories come to mind,” he said in a haunting recollection. “I can remember listening to Hitler’s speeches on the radio. I didn’t understand the words, I was six years old. But I understood the mood. And it was frightening and terrifying. And when you watch one of Trump’s rallies that can’t fail to come to mind. That’s what we’re facing.”

Though he self-identifies as an anarcho-syndicalist or a libertarian socialist, Chomsky revealed to me that he had voted for Republicans in the past (“like them or not, they were an authentic party”). But now he said, they were a truly dangerous insurgency.

“Because of Trump’s fanaticism, the worshipful base of the Republican Party barely regards climate change as a serious problem. That’s a death warrant to the species.”

Faced with such existential threats, it is perhaps unsurprising that Chomsky remains a dissident intellectual – in the manner of one of his heroes, Bertrand Russell (who lived to 97 and similarly straddled politics and philosophy). But he also still spends hours a day answering emails from admirers and critics, and teaches linguistics at the University of Arizona, the state where he lives with his second wife, Valeria Wasserman, a Brazilian translator.

Chomsky is also still engaged by British politics. “Brexit was a very serious error, it means that Britain will be compelled to drift even further into subordination to the US,” he told me. “I think it’s a disaster. What does it mean for the Conservative Party? I imagine they can lie their way out of it, they’re doing a good job of lying about a lot of things and getting away with it.”

Of Keir Starmer, he scornfully remarked: “He’s returning the Labour Party to a party that’s reliably obedient to power, that will be Thatcher-lite in the style of Tony Blair and that won’t ruffle the feathers of either the US or anyone who’s important in Britain.”

The Italian Marxist Antonio Gramsci advised radicals to maintain “pessimism of the intellect and optimism of the will”. What, I asked Chomsky at the close of our conversation, gives him hope?

[See also: Iceland’s prime minister: “My opposition to Nato has not changed”]

“A lot of young people; Extinction Rebellion in England, young people dedicated to trying to put an end to the catastrophe. Civil disobedience – it’s not a joke, I’ve been involved with it for much of my life. I’m too old for it now [Chomsky was first arrested in 1967 for protesting against the Vietnam War and shared a cell with Norman Mailer]… It’s not pleasant to be thrown in jail and beaten, but they’re willing to undertake it.

“There are plenty of young people who are appalled by the behaviour of the older generation, rightly, and are dedicated to trying to stop this madness before it consumes us all. Well, that’s the hope for the future.”

George Eaton is senior editor of the New Statesman.

One Response to “Noam Chomsky: “We’re Approaching the Most Dangerous Point in Human History””