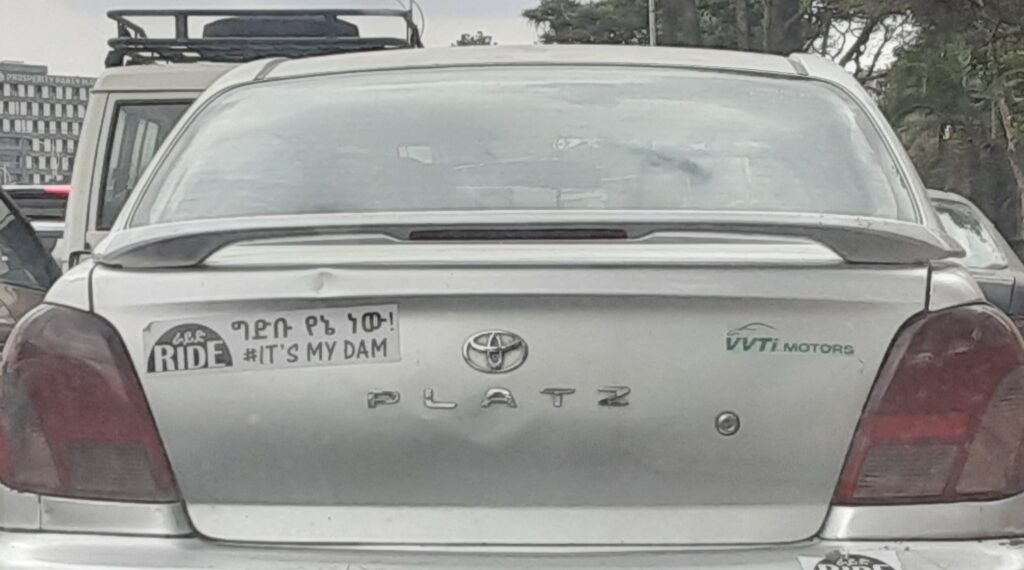 20 Apr 2022 – Ethiopia’s capital, Addis Ababa, is experiencing a building boom, which includes all the foreign embassies near the airport. The din of construction is non-stop on weekdays. Lots of sky high office buildings and condos underway.

Even the Embassy of Bangladesh is building new floors right across the street from my alleyway hotel. Mercedes drive in and out, and I wonder how such a poor country affords them, but Mercedes seem to be the ambassadorial vehicle of choice. Governments like Bangladesh, which don’t maintain embassies in many other countries, no doubt maintain them here because Addis Ababa is the seat of the African Union, and with the Grand Ethiopian Renaissance Dam coming online, Ethiopia is emerging as a regional powerhouse, despite how much that dismays US policymakers.

The European Union embassy flies its flag behind a concrete wall topped with barbed-wire several blocks around the corner from where I’m staying. The Embassy of Bangladesh doesn’t take such elaborate precautions because, I imagine, they have no anxieties about sudden anti-Western outbursts.

Curiously, it seems as though a number of high-rise buildings have been partially constructed, then abandoned midway, and they’re unsightly to say the least. Last night I asked a new friend why and she said that Tigrayan People’s Liberation Front (TPLF) elites had begun building them, then had gone off to Mekelle and left them that way after being forced from power. She also showed me the small garden next to the condo building she lives in and said that she manages and defends it—the garden—against developers who want to build another high-rise on it.

With regard to the partially constructed buildings, someone else told me that the real problem is a shortage of cement.

To be in Addis, you wouldn’t think there was a war going unless you were watching television. I was invited onto several local television stations to talk about what I’d seen in IDP camps near the front lines in the north, US strategies for toppling the government led by Prime Minister Abiy Ahmed, and the pernicious sanctions legislation on the floors of both House and Senate, H.R. 6600 and S.B. 3199.

I count 10 foreign journalists, including two Canadians, one Russian, and one New Zealander based in Paris, who oppose the divide-and-conquer imperial pressures coming from the US and its allies. We’re so few that we’re asked to interview on Ethiopian outlets whenever any of us come here, and via Zoom from wherever we live.

We all write for dissident press, and these Ethiopians outlets, most of them state outlets, found us on social media. They commonly introduce me as a print, radio, and social media journalist. Last night I met a Le Monde Diplomatique reporter who had of course never heard of any outlets I write or produce radio for but knew me on Twitter.

These connections made via social media explain the establishment’s desperate determination to control the narrative by controlling social media, as proposed in House Resolution 6600 , the brutal sanctions bill absurdly named the “Ethiopia Stabilization, Peace, and Democracy Act.”

This legislation, now on the House floor, resolves that, “The Secretary of State, in coordination with the Administrator of the United States Agency for International Development, the Secretary of the Treasury, and the heads of other relevant federal departments and agencies” develop a strategy to “combat hate speech and disinformation in Ethiopia, including efforts to coordinate with social media companies to mitigate the effects of social media content generated outside of the United States focused on perpetuating the civil war and other conflicts in Ethiopia, including through hate speech and language inciting violence.”

In other words, they don’t want us talking to each other in an uncensored public forum, without the Western state and corporate media filters they’re accustomed to relying on. And it’s not just “social media content generated outside of the United States” that they’re worried about. Particularly effective activists and collective Twitter hubs created by the Ethiopian and Eritrean diasporas have already been removed from Twitter altogether. One, Dr. Simon Tesfamariam, recounted his own Twitter ban and that of others here, calling for #NoMore Censorship of Africa’s Roving Digital Army of Peace.

The success of that digital army of peace is manifest in Ethiopian streets, from Lalibela to Dessie, and the capital Addis Ababa, where taxis sport the message #NoMore, sometimes with subheads like “Say No to Neocolonialism.” I know four of the founders of the viral #NoMore movement in the US, and two of them have been banned from Twitter.

I first saw #NoMore on one of the three-wheeled taxis known as bajaj in the mountain town of Lalibela, site of the rock-hewn Ethiopian Orthodox churches built by King Lalibela in the 12th century. I had gone straight to Lalibela from Addis, and when I shared my amazement at seeing “#NoMore” on the back of a bajaj there, photographer Jemal Countess told me, “Oh you’ll see a lot of those.” I briefly became preoccupied with getting a photograph of a bajaj with #NoMore emblazoned on the back until I realized that he was right. You see a lot of those, so there are lots of opportunities to take pictures.

More hashtag signage includes #GERD and #ItsMyDam, referring to the national hope invested in the Grand Ethiopian Renaissance Dam (GERD), which just came online though not at full power yet. The GERD promises to generate enough electricity for all of Ethiopia and some of its neighbors, ending the electricity poverty holding most African nations back.

It’s no wonder that the US wants to stop hashtags like #NoMore and #ItsMyDam from going viral but they aren’t hate speech and they aren’t inciting violence.