Ukrainians Could Defeat a Russian Occupation by Scaling Up Unarmed Resistance 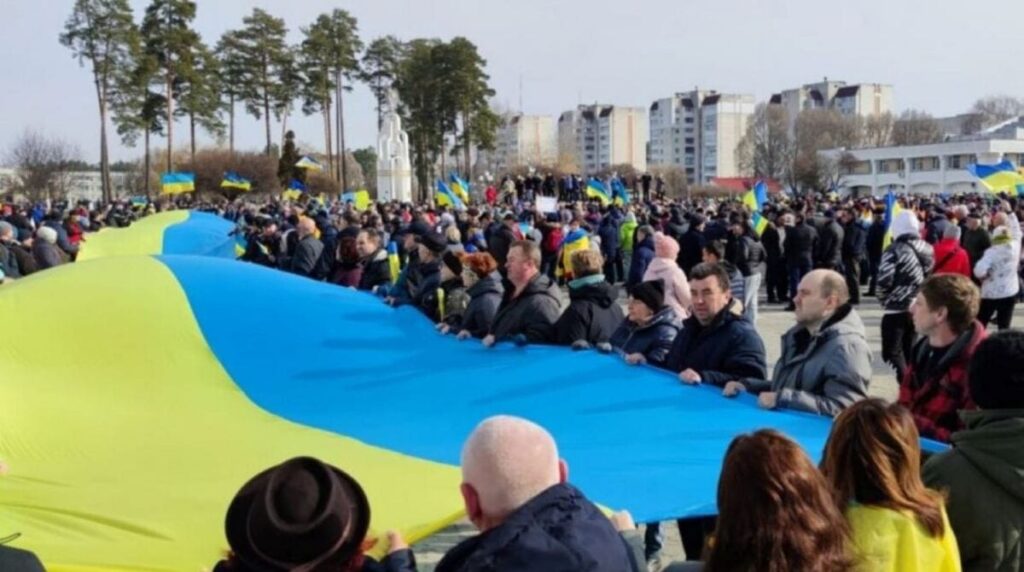 28 Mar 2022 – As peace, conflict and resistance scholars, we ask ourselves the same question as many other people these days: What would we do if we were Ukrainians? We hope we would be brave, selfless and fight for a free Ukraine based on the knowledge we have. Resistance always requires self-sacrifice. Yet there are effective ways to resist invasion and occupation that don’t involve arming ourselves or others, and will lead to fewer Ukrainian deaths than military resistance.We thought about how — if we were living in Ukraine and had just been invaded — we would best defend the Ukrainian people and culture. We understand the logic behind the Ukrainian government’s appeal for weapons and soldiers from abroad. However, we conclude that such a strategy will only prolong the pain and lead to even greater death and destruction. We recall the wars in Syria, Afghanistan, Chechnya, Iraq and Libya, and we would aim to avoid such a situation in Ukraine.

The question then remains: What would we do instead to protect the Ukrainian people and culture? We look with respect at all soldiers and brave civilians fighting for Ukraine; how can this powerful willingness to fight and die for a free Ukraine serve as a real defense of Ukrainian society? Already, people all over Ukraine are spontaneously using nonviolent means to fight the invasion; we would do our best to organize a systematic and strategic civil resistance. We would use the weeks — and maybe even months — that some areas of western Ukraine may remain less affected by military fighting to prepare ourselves and other civilians for what lies ahead.

Instead of investing our hope in military means, we would immediately set about training as many people as possible in civil resistance, and aim to better organize and coordinate the civil resistance that is already happening spontaneously. Research in this area shows that unarmed civil resistance under many circumstances is more effective than armed struggle. Fighting an occupying power is always difficult, no matter what means are used. However, in Ukraine, there is knowledge and experience that peaceful means can lead to change, as during the Orange Revolution in 2004 and the Maidan Revolution in 2014. While the circumstances are very different now, Ukrainian people can use the coming weeks to learn more, spread this knowledge and build networks, organizations and infrastructure that fight for Ukrainian independence in the most effective way.

Today there is comprehensive international solidarity with Ukraine — support we can count on being extended to unarmed resistance in the future. With this in mind, we would focus our efforts on four areas.

1. We would establish and continue relations with Russian civil society groups and members that are supporting Ukraine. Even though they are under severe pressure, there are human rights groups, independent journalists and ordinary citizens taking big risks in order to resist the war. It is important that we know how to keep in touch with them through encrypted communication, and we need knowledge and infrastructure on how to do this. Our greatest hope for a free Ukraine is that the Russian population overthrow Putin and his regime through a nonviolent revolution. We also acknowledge the brave resistance to Belarus leader Alexander Lukashenko and his regime, encouraging continued connection and coordination with activists in that country.

2. We would disseminate knowledge about the principles of nonviolent resistance. Nonviolent resistance is based on a certain logic, and adhering to a principled line of nonviolence is an important part of this. We are not just talking about morality, but about what is most effective under the circumstances. Some of us might have been tempted to kill Russian soldiers if we saw the opportunity, but we understand that it is not in our interest in the long run. Killing only a few Russian soldiers will not lead to any military success, but is likely to delegitimize everyone involved in civil resistance. It will make it harder for our Russian friends to stand on our side and easier for Putin to claim we are terrorists. When it comes to violence, Putin has all the cards in his hand, so our best chance is to play a completely different game. Ordinary Russians have learned to think of Ukrainians as their brothers and sisters, and we should take maximum advantage of this. If Russian soldiers are forced to kill many peaceful Ukrainians who resist in a courageous manner, the morale of the occupying soldiers will greatly decrease, desertion will increase, and the Russian opposition will be strengthened. This solidarity from ordinary Russians is our biggest trump card, meaning we must do everything we can to ensure that Putin’s regime does not have the opportunity to change this perception of Ukrainians.

3. We would disseminate knowledge about methods of nonviolent resistance, especially those that have been used with success during invasions and occupations. In those areas of Ukraine already occupied by Russia, and in the event of a prolonged Russian occupation, we would want ourselves and other civilians to be prepared to continue the struggle. An occupying power needs stability, calm and cooperation in order to carry out the occupation with the least amount of resources. Nonviolent resistance during occupation is about noncooperation with all aspects of the occupation. Depending on what aspects of the occupation are most despised, potential opportunities for nonviolent resistance include strikes in the factories, building a parallel school system, or refusing to cooperate with the administration. Some nonviolent methods are about gathering many people in visible protests, although during an occupation, this can be associated with great risk. It is probably not the time for the large demonstrations that characterized Ukraine’s previous nonviolent revolutions. Instead, we would focus on more dispersed actions that are less risky, such as boycotts of Russian propaganda events, or coordinated stay at home days, which could bring the economy to a standstill. The possibilities are endless, and we can draw inspiration from countries occupied by the Nazis during World War II, from East Timor’s independence struggle or other countries occupied today, such as West Papua or Western Sahara. The fact that Ukraine’s situation is unique does not preclude us from learning from others.

4. We would establish contact with international organizations such as Peace Brigades International or Nonviolent Peaceforce. Over the past 40 years, organizations like these have learned how international observers can make a significant difference to local human rights activists living with threats to their lives. Their experience from countries such as Guatemala, Colombia, Sudan, Palestine and Sri Lanka can potentially be developed to fit the circumstances in Ukraine. It might take a while to implement, yet over the long term, they could be able to organize and send Russian civilians to Ukraine as “unarmed bodyguards,” as part of international teams. It will be more difficult for Putin’s regime to commit atrocities against the Ukrainian civilian population if Russian civilians witness it, or if witnesses are citizens of countries that are maintaining friendly relations with his regime — for example China, Serbia or Venezuela.

If we had the Ukrainian government’s backing for this strategy, as well as access to the same economic resources and technological expertise that now goes to military defense, the strategy we propose would have been easier to implement. If we had started preparing a year ago, we would have been much better equipped today. Nevertheless, we believe unarmed civil resistance has a good chance of defeating a potential future occupation. For the Russian regime, carrying out an occupation will require money and personnel. Maintaining an occupation will be even more costly if the Ukrainian population engages in massive non-cooperation. Meanwhile, the more peaceful the resistance, the more difficult it is to legitimize the oppression of those who resist. Such resistance would also ensure good relations with Russia in the future, which will always be the best guarantee of Ukraine’s security with this powerful neighbor in the East.

Of course, we who are living abroad in safety have no right to tell Ukrainians what to do, but if we were Ukrainians today, this is the path we would choose. There is no easy way, and innocent people are going to die. However, they are already dying, and if only the Russian side is using military force, the chances of preserving Ukrainian lives, culture and society are much higher.

The following scholars and researchers have signed their names to this article:

Jørgen Johansen is a nonviolence author/activist, editor of Irene Publishing, and a member of the TRANSCEND Network from Norway living amongst the trees in Southern Sweden. He is the co-editor of the Journal of Resistance Studies and coordinator of the Nordic Nonviolence Study Group, or NORNONS. After 40 years of work in more than 100 countries he has settled and is inspired by Cicero: “If you have a garden and a library, you have everything you need.”