How Could the U.S. Help to Bring Peace to Ukraine? 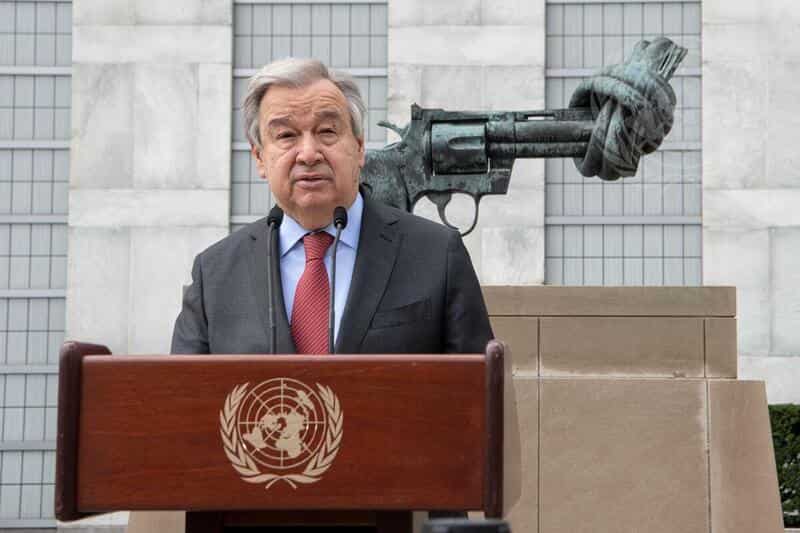 28 Apr 2022 – On April 21st, President Biden announced new shipments of weapons to Ukraine, at a cost of $800 million to U.S. taxpayers. On April 25th, Secretaries Blinken and Austin announced over $300 million more military aid. The United States has now spent $3.7 billion on weapons for Ukraine since the Russian invasion, bringing total U.S. military aid to Ukraine since 2014 to about $6.4 billion.

The top priority of Russian airstrikes in Ukraine has been to destroy as many of these weapons as possible before they reach the front lines of the war, so it is not clear how militarily effective these massive arms shipments really are. The other leg of U.S. “support” for Ukraine is its economic and financial sanctions against Russia, whose effectiveness is also highly uncertain.

UN Secretary General Antonio Guterres is visiting Moscow and Kyiv to try to kick start negotiations for a ceasefire and a peace agreement. Since hopes for earlier peace negotiations in Belarus and Turkey have been washed away in a tide of military escalation, hostile rhetoric and politicized war crimes accusations, Secretary General Guterres’ mission may now be the best hope for peace in Ukraine.

This pattern of early hopes for a diplomatic resolution that are quickly dashed by a war psychosis is not unusual. Data on how wars end from the Uppsala Conflict Data Program (UCDP) make it clear that the first month of a war offers the best chance for a negotiated peace agreement. That window has now passed for Ukraine.

An analysis of the UCDP data by the Center for Strategic and International Studies (CSIS) found that 44% of wars that end within a month end in a ceasefire and peace agreement rather than the decisive defeat of either side, while that decreases to 24% in wars that last between a month and a year. Once wars rage on into a second year, they become even more intractable and usually last more than ten years.

CSIS fellow Benjamin Jensen, who analyzed the UCDP data, concluded, “The time for diplomacy is now. The longer a war lasts absent concessions by both parties, the more likely it is to escalate into a protracted conflict… In addition to punishment, Russian officials need a viable diplomatic off-ramp that addresses the concerns of all parties.”

To be successful, diplomacy leading to a peace agreement must meet five basic conditions:

First, all sides must gain benefits from the peace agreement that outweigh what they think they can gain by war.

U.S. and allied officials are waging an information war to promote the idea that Russia is losing the war and that Ukraine can militarily defeat Russia, even as some officials admit that that could take several years.

In reality, neither side will benefit from a protracted war that lasts for many months or years. The lives of millions of Ukrainians will be lost and ruined, while Russia will be mired in the kind of military quagmire that both the U.S.S.R. and the United States already experienced in Afghanistan, and that most recent U.S. wars have turned into.

In Ukraine, the basic outlines of a peace agreement already exist. They are: withdrawal of Russian forces; Ukrainian neutrality between NATO and Russia; self-determination for all Ukrainians (including in Crimea and Donbas); and a regional security agreement that protects everyone and prevents new wars.

Both sides are essentially fighting to strengthen their hand in an eventual agreement along those lines. So how many people must die before the details can be worked out across a negotiating table instead of over the rubble of Ukrainian towns and cities?

Second, mediators must be impartial and trusted by both sides.

The United States has monopolized the role of mediator in the Israeli-Palestinian crisis for decades, even as it openly backs and arms one side and abuses its UN veto to prevent international action. This has been a transparent model for endless war.

Turkey has so far acted as the principal mediator between Russia and Ukraine, but it is a NATO member that has supplied drones, weapons and military training to Ukraine. Both sides have accepted Turkey’s mediation, but can Turkey really be an honest broker?

The UN could play a legitimate role, as it is doing in Yemen, where the two sides are finally observing a two-month ceasefire. But even with the UN’s best efforts, it has taken years to negotiate this fragile pause in the war.

Third, the agreement must address the main concerns of all parties to the war.

In 2014, the U.S.-backed coup and the massacre of anti-coup protesters in Odessa led to declarations of independence by the Donetsk and Luhansk People’s Republics. The first Minsk Protocol agreement in September 2014 failed to end the ensuing civil war in Eastern Ukraine. A critical difference in the Minsk II agreement in February 2015 was that DPR and LPR representatives were included in the negotiations, and it succeeded in ending the worst fighting and preventing a major new outbreak of war for 7 years.

There is another party that was largely absent from the negotiations in Belarus and Turkey, people who make up half the population of Russia and Ukraine: the women of both countries. While some of them are fighting, many more can speak as victims, civilian casualties and refugees from a war unleashed mainly by men. The voices of women at the table would be a constant reminder of the human costs of war and the lives of women and children that are at stake.

Even when one side militarily wins a war, the grievances of the losers and unresolved political and strategic issues often sow the seeds of new outbreaks of war in the future. As Benjamin Jensen of CSIS suggested, the desires of U.S. and Western politicians to punish and gain strategic advantage over Russia must not be allowed to prevent a comprehensive resolution that addresses the concerns of all sides and ensures a lasting peace.

Fourth, there must be a step-by-step roadmap to a stable and lasting peace that all sides are committed to.

The Minsk II agreement led to a fragile ceasefire and established a roadmap to a political solution. But the Ukrainian government and parliament, under Presidents Poroshenko and then Zelensky, failed to take the next steps that Poroshenko agreed to in Minsk in 2015: to pass laws and constitutional changes to permit independent, internationally-supervised elections in the DPR and LPR, and to grant them autonomy within a federalized Ukrainian state.

Now that these failures have led to Russian recognition of the DPR and LPR’s independence, a new peace agreement must revisit and resolve their status, and that of Crimea, in ways that all sides will be committed to, whether that is through the autonomy promised in Minsk II or formal, recognized independence from Ukraine.

A sticking point in the peace negotiations in Turkey was Ukraine’s need for solid security guarantees to ensure that Russia won’t invade it again. The UN Charter formally protects all countries from international aggression, but it has repeatedly failed to do so when the aggressor, usually the United States, wields a Security Council veto. So how can a neutral Ukraine be reassured that it will be safe from attack in the future? And how can all parties be sure that the others will stick to the agreement this time?

Fifth, outside powers must not undermine the negotiation or implementation of a peace agreement.

Although the United States and its NATO allies are not active warring parties in Ukraine, their role in provoking this crisis through NATO expansion and the 2014 coup, then supporting Kyiv’s abandonment of the Minsk II agreement and flooding Ukraine with weapons, make them an “elephant in the room” that will cast a long shadow over the negotiating table, wherever that is.

In April 2012, former UN Secretary General Kofi Annan drew up a six-point plan for a UN-monitored ceasefire and political transition in Syria. But at the very moment that the Annan plan took effect and UN ceasefire monitors were in place, the United States, NATO and their Arab monarchist allies held three “Friends of Syria” conferences, where they pledged virtually unlimited financial and military aid to the Al Qaeda-linked rebels they were backing to overthrow the Syrian government. This encouraged the rebels to ignore the ceasefire, and led to another decade of war for the people of Syria.

The fragile nature of peace negotiations over Ukraine make success highly vulnerable to such powerful external influences. The United States backed Ukraine in a confrontational approach to the civil war in Donbas instead of supporting the terms of the Minsk II agreement, and this has led to war with Russia. Now Turkey’s Foreign Minister, Mevlut Cavosoglu, has told CNN Turk that unnamed NATO members “want the war to continue,” in order to keep weakening Russia.

How the United States and its NATO allies act now and in the coming months will be crucial in determining whether Ukraine is destroyed by years of war, like Afghanistan, Iraq, Libya, Somalia, Syria and Yemen, or whether this war ends quickly through a diplomatic process that brings peace, security and stability to the people of Russia, Ukraine and their neighbors.

If the United States wants to help restore peace in Ukraine, it must diplomatically support peace negotiations, and make it clear to its ally, Ukraine, that it will support any concessions that Ukrainian negotiators believe are necessary to clinch a peace agreement with Russia.

Whatever mediator Russia and Ukraine agree to work with to try to resolve this crisis, the United States must give the diplomatic process its full, unreserved support, both in public and behind closed doors. It must also ensure that its own actions do not undermine the peace process in Ukraine as they did the Annan plan in Syria in 2012.

One of the most critical steps that U.S. and NATO leaders can take to provide an incentive for Russia to agree to a negotiated peace is to commit to lifting their sanctions if and when Russia complies with a withdrawal agreement. Without such a commitment, the sanctions will quickly lose any moral or practical value as leverage over Russia, and will be only an arbitrary form of collective punishment against its people, and against poor people everywhere who can no longer afford food to feed their families. As the de facto leader of the NATO military alliance, the U.S. position on this question will be crucial.

So policy decisions by the United States will have a critical impact on whether there will soon be peace in Ukraine, or only a much longer and bloodier war. The test for U.S. policymakers, and for North Americans who care about the people of Ukraine, must be to ask which of these outcomes U.S. policy choices are likely to lead to.

Anticopyright: Editorials and articles originated on TMS may be freely reprinted, disseminated, translated and used as background material, provided an acknowledgement and link to the source, TMS: How Could the U.S. Help to Bring Peace to Ukraine?, is included. Thank you.