4 May 2022 – Ann Garrison continues her reporting from the Horn of Africa. She is now in Eritrea. 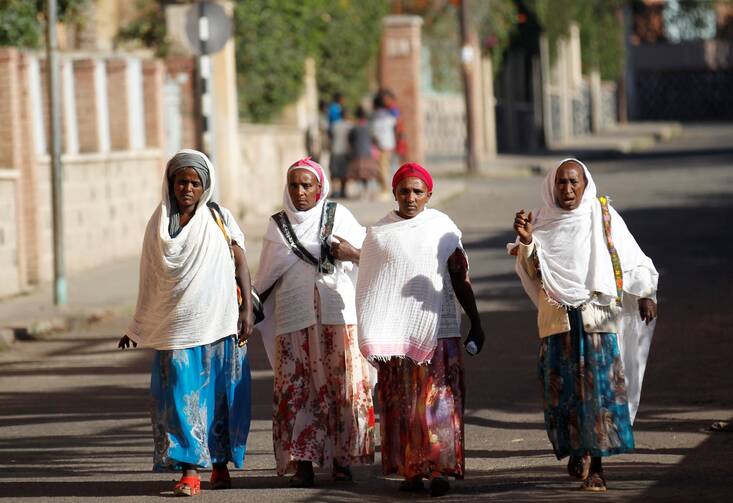 It’s no surprise that the US has done everything it can to turn a nation that celebrates International Workers’ Day into a pariah state. Free education through college and subsidized health care don’t suit its neoliberal model either, nor does its determination to negotiate fair prices for its considerable natural resources.

Eritrea may have most offended US policymakers, however, by its defiance of the Tigrayan People’s Liberation Front (TPLF), the US puppet that ruled Ethiopia with an iron fist from 1991 to 2018, then started the ongoing Ethiopian war by attacking the nation’s Northern Command base in Tigray Region in November 2020.

Having failed to reclaim power over all Ethiopia, the TPLF now aspires to create its own Tigray nation, expanded west to the Sudanese border, and north into Eritrea all the way to the Red Sea. Shortly after attacking Ethiopia’s Northern Command, it fired missiles across the Ethiopian border, all the way to Asmara, and Eritrea responded, not only in its own defense but also as an ally of Ethiopia.

I haven’t been able to upload my cell phone snaps to social media or Black Agenda Report because the wifi’s very limited in Eritrea, in part due to 9 years of unjust UN sanctions.

During that time anything that could have been put to military use was embargoed. Anything. Over lunch Eritrean Minister of Information Yemane Ghebremeskel told me that sanctions held up the delivery of basic computers and servers ordered to upgrade his offices and that they’d finally been obtained only after extensive diplomatic negotiations. Imagine trying to create or improve national wi-fi service under those conditions. Then, less than two years, later, the TPLF began its ongoing war and drew Eritrea in.

It’s not going to be easy to get this piece to Black Agenda Report by its weekly deadline either, but Eritrean officials have treated me like a queen because I write for Black Agenda Report, so I have to try. They remember that I wrote, in BAR’s tribute issue to Glen Ford, that one of the last things Glen said to me was that he was so glad I was staying on top of the Ethiopian and Eritrean stories because he’d been too sick to.

The UN Security Council (UNSC) imposed the sanctions on Eritrea from 2009 to 2018, alleging that it was supporting Al Shabaab. I don’t have wi-fi to double check right now, but as Minister Ghebremeskel and I both remember, Libya was the one nation then on the UNSC that voted “no” on the 2009 resolution, and China abstained. The sanctions remained in place even after a 2011 UN monitoring group found no evidence that Eritrea had ever done anything to help Al Shabaab.

I asked why the sanctions had been lifted in 2018, and he said that awareness that they were unjust had gradually built on the UNSC.

Although the 2009-2018 sanctions hurt the Eritrean economy and hindered development overall,  they’re not the only reason wi-fi is limited in Eritrea. This is a poor nation with priorities for use of its limited resources, Minister Ghebremeskel tells me. Building a national wi-fi network is a hugely expensive project that can’t be prioritized over clean water, electricity, education, and health. At this point, 85% of the population have clean water, 43% electricity.

US sanctions imposed on Ethiopia and Eritrea last year didn’t hurt much here. None of the sanctioned officials and military officers are believed to have foreign assets to seize or burning desires to travel in the West. The Information Minister picked me up at my hotel in modest dress, driving a modest car, and took me to a modest restaurant, all without bodyguards, but I kept teasing him that he must have some foreign assets stashed away somewhere.

Ethiopia was hurt by the January 1 cancelation of AGOA, the African Growth and Opportunity Act, which gave corporations manufacturing in Ethiopia tariff-free access to U.S. markets. Even before the cancelation went into effect, corporations manufacturing—mostly clothing—in Ethiopia’s new industrial park had begun to back out. This meant loss of work, particularly for young women whose first participation in the market economy had been in the new park.

The Information Minister told me, however, that Eritrea had been kicked out of AGOA so long ago that it made no difference to them.

The sanctions now pending in Congress—House Resolution 6600 and Senate Bill 3199—could, however, be very damaging, including not only IMF and World Bank sanctions but also secondary sanctions that would punish other nations doing business with Ethiopia and Eritrea.

These pending sanctions would also give new power to the US Ministry of Truth to collaborate with Silicon Valley’s social media giants to ban Eritreans and Ethiopians from talking about their own nations’ politics in a global public forum. People of both nations are well aware of this, and alarmed.

One nice thing about being in Eritrea and Ethiopia. . .

Is not seeing blue and yellow and American tribalists around every corner.