A series of moves against media outlets by PayPal shows the next step in speech control: confiscation. Why won’t the company answer questions? 3 May 2022 – In the last week or so, the online payment platform PayPal without explanation suspended the accounts of a series of individual journalists and media outlets, including the well-known alt sites Consortium News and MintPress. Each received a variation of the following message: 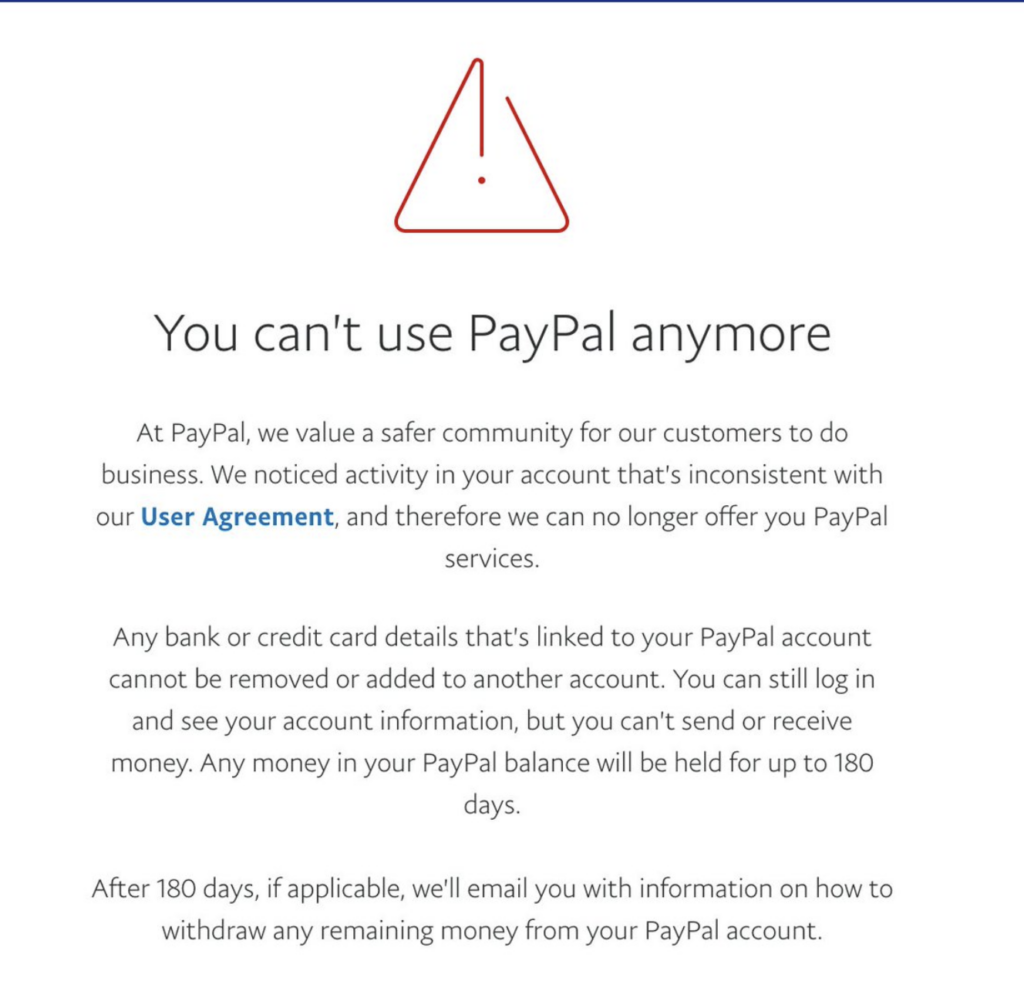 Unlike many on the list, Consortium editor Joe Lauria succeeded in reaching a human being at the company in search of details about the frozen or “held” funds referenced in the note. The PayPal rep told him that if the company decided “there was a violation” after a half-year review period, then “it is possible” PayPal would keep the $9,348.14 remaining in Consortium’s account, as “damages.”

“A secretive process in which they could award themselves damages, not by a judge or a jury,” Lauria says. “Totally in secret.”

Consortium, founded by the late investigative reporter Robert Parry, has been critical of NATO and the Pentagon and a consistent source of skeptical reporting about Russiagate, as well as one of just a few outlets to regularly cover the Julian Assange case with any sympathy for the accused. Ironically, one of the site’s primary themes involves exploring disinformation emanating from the intelligence community. The site has had content disrupted by platforms like Facebook before, but now its pockets are being picked in addition.

This episode ups the ante again on the content moderation movement, toward the world hinted at in the response to the Canadian trucker protests, where having the wrong opinions can result in your money being frozen or seized. Going after cash is a big jump from simply deleting speech, with a much bigger chilling effect. This is especially true in the alternative media world, where money has long been notoriously tight, and the loss of a few thousand dollars here or there can have a major effect on a site, podcast, or paper.

As MintPress founder and executive director Mnar Adley points out, the current era of content moderation — characterized by private platforms either overtly or covertly working with government to identify accounts for censure — really began with PayPal’s historic decision in 2010 to halt donations to Wikileaks. In that case, PayPal acted after receiving a letter from the State Department claiming the site’s activities were illegal.

Lauria believes PayPal is basing a potential claim on his company’s funds on a list of restricted activities in its service agreement that includes providing “false, inaccurate or misleading information.” He notes, of course, that “false” is “what they think is false, that is,” which is troubling for a pair of big reasons.

One is the ongoing possibility of government or law enforcement involvement in fact-checking decisions, as PayPal announced just last year it would be cooperating with authorities in a content moderation campaign. The other is that the thread connecting the recent affected accounts — which include the former RT contributor Caleb Maupin and the host of the Geopolitics and Empire podcast Hrvoje Morić, among others — is that they’re all generally antiwar voices, who’ve been critical either of NATO or of official messaging with regard to the Ukraine conflict.

Alan MacLeod of MintPress is one of the writers who received the notice about improper “activity” in his account. He assumed at first there had to be a mistake.

“The claim that my activity is ‘inconsistent’ with their user agreement is complete nonsense because I literally haven’t used my PayPal account since at least August of 2021,” he says. “I actually assumed [the suspension] was because it’d been inactive for too long.”

MacLeod’s most recent article is entitled, “The NATO to TikTok Pipeline: Why is TikTok Employing So Many National Security Agents?” In it, he laid out a long list of “former spooks, spies, and Mandarins” hired by TikTok:

While simultaneously being the Content Policy Lead for TikTok Canada, Alexander Corbeil is also the vice president of the NATO Association of Canada, a NATO-funded organization chaired by former Canadian Minister of Defense David Collenette… Another NATO-linked new recruit is Ayse Koçak, a Global Product Policy manager at the company. Before joining TikTok last year, she spent three years at NATO…

If this is what qualifies as “false, inaccurate, or misleading information,” while CNN, MSNBC, and Fox’s daily rollout of ex-military analysts with undisclosed lobbying ties is upheld as the unobjectionable truth, it’s more or less finita la commedia for independent media. “I guess writing about big social media outlets being staffed with former NATO officials might be controversial,” MacLeod quipped.

The experience of MintPress exemplifies the logistical Whac-a-Mole controversial publishers have to play now in order to survive as businesses. In addition to the PayPal ban — which hit MacLeod, Adley, and one other former Mint contributor, forcing the company to stop paying its writers via the platform — MintPress last month saw two of its fundraising campaigns on GoFundMe shut down. According to Adley, the outlet was able to receive about 90% of donations across a two-year campaign before they were abruptly cut off. At least GoFundMe didn’t try to keep “damages,” as several thousand dollars earmarked for MintPress were instead returned to donors.

Adley believes the chief crime of MintPress is that it exists as an alternative to monolithic messaging surrounding issues like Ukraine. Moreover, she believes it’s in trouble with PayPal not for being false, but precisely for printing true uncomfortable things, like McLeod’s NATO-to-TikTok story, or Dan Cohen’s recent piece about the 150-odd Western public relations firms working with Ukraine’s Foreign Ministry. Several of these MintPress pieces about Ukraine have gone viral in recent weeks.

“We name the names, we break through the propaganda, we show the profiteers,” Adley says. “There’s so few of us left that do that, and I think that’s why we’ve become a target.”

As is the case with a lot of these accounts, MintPress falls out of the mainstream on whole ranges of issues. It’s come under heavy fire for its coverage of Syria, for instance. A lot of political moderates will struggle to connect with its point of view. This however is the whole point of alternative media, whose brief is to explore themes the traditional press won’t or can’t. If traditional news consumers feel comfortable reading them, these sites probably aren’t doing their jobs correctly. Censorship of them is especially concerning if law enforcement plays any role, since these are among the last media concerns to evince any skepticism about national security messaging. Unfortunately, there is reason to suspect this is the case.

On July 26th of last year, PayPal announced a new partnership with the Anti-Defamation League (ADL) to “fight extremism and hate through the financial industry and across at-risk communities.” In describing the arrangement, PayPal talked about a third actor — the government:

PayPal and ADL have launched a research effort to address the urgent need to understand how extremist and hate movements throughout the U.S. are attempting to leverage financial platforms to fund criminal activity. The intelligence gathered through this research initiative will be shared broadly across the financial industry and with policymakers and law enforcement.

While companies like Facebook, Google, and Twitter at least occasionally explain why prominent accounts have been suspended, neither PayPal nor the ADL will comment about how suspensions and confiscations of companies like MintPress and Consortium fit into their efforts to head off “criminal activity.” I reached out this week not just to the media relations offices of PayPal and the ADL, but to figures quoted in last year’s announcement, including ADL’s Jonathan Greenblatt and PayPal Chief Risk officer Aaron Karczmer, getting no response anywhere.

The ADL’s silence is particularly galling because some of the suspended accounts have written extensively about neo-Nazi movements not just in Ukraine, but in the U.S. and in other countries, including Russia. MacLeod only just recently published a thread on the Nazi symbols worn by soldiers on both sides of the Ukraine conflict:

Lol. This article from German outlet Die Welt, 'the lie of the neo-Nazi battalion' is all about downplaying Nazis' role in the Azov Battalion.

But in the image ititself chose to illustate the article, there are 3 separate unambiguous, objectively Nazi symbols.

Some person in the replies doing whataboutism and asking why I don't highlight Russian Nazis. Well, I do. https://t.co/v0GOMmNyxo

Is the ADL really interested in suppressing these voices? Why will they not answer questions on this front? At the very least, the ADL and PayPal should both explain the nature of their relationship to “policymakers” and “law enforcement.” Are they getting recommendations on whom to suspend from authorities? How do they identify sites for censure? So long as PayPal takes money from customers without guaranteeing they will explain suspension or confiscation decisions, or at least deigns to answer media queries about its decisions, media outlets should probably think twice about using their services.

PayPal was sued earlier this year by three other account-holders for similar freezing of accounts without explanation. One of the original complainants was Chris Moneymaker, winner of the 2003 World Series of Poker, who claimed PayPal placed a hold on $12,000 of his money (the firm ultimately returned the funds, according to Bloomberg). The litigation involving the other complainants is still pending. PayPal meanwhile has periodically cut off other controversial media outlets, on both the left and the right. A former Infowars employee named David Knight, for instance, saw his independent broadcast show cut off last year, ironically after he broke with Alex Jones over the Stop the Steal issue.

All of this is going on at a time when the Biden administration just announced the formation of a dystopian “Disinformation Governance Board,” preposterously headed by a bubbly former Kennan Institute fellow, Nina “The Singing Neoliberal” Jankowicz. In a detail Jonathan Swift couldn’t have written better, Jankowicz — who once cited the author of the greatest news hoax of our generation, Christopher Steele, as an expert on the “evolution of disinfo” — last year put out a video of herself as the “Mary Poppins of Disinformation.” In it, she sang a variation of “Supercalifragilisticexpialidocious” featuring lines like:

They’re laundering disinfo and we really should take note

And not support their lies with our wallet voice or vote…

You can just call me the Mary Poppins of disinformation 💁🏻‍♀️ https://t.co/eGV9lpctYn pic.twitter.com/WVQFA2bPmq

As many have pointed out, this is a literal nanny singing about the joys of the nanny state, in a song that includes lines about using the “wallet” to starve speech. There’s a fine line between parody and horror, and we’re tumbling fast to the horror side.