Biden has dished out his own escalatory rhetoric, calling Putin a war criminal and suggesting that the Russian president couldn’t remain in power. 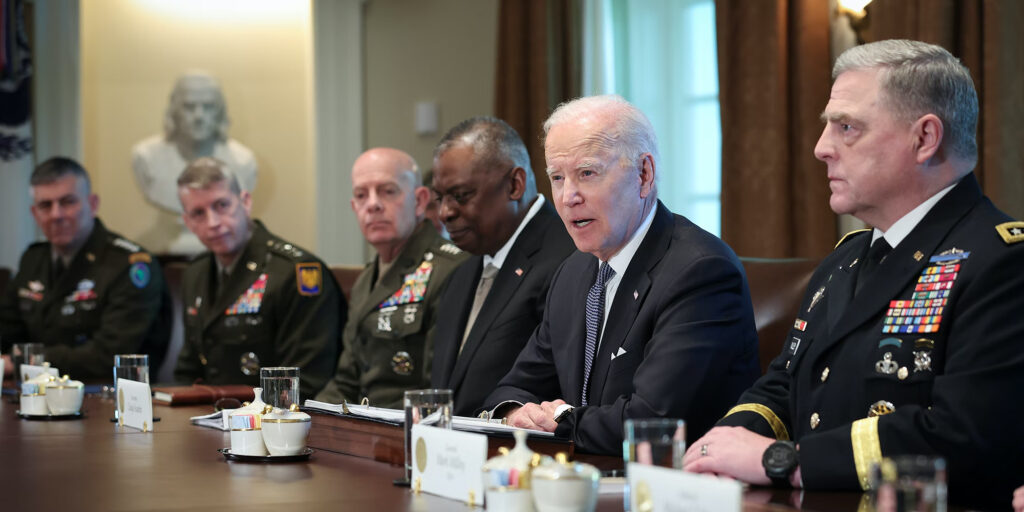 President Joe Biden meets with Secretary of Defense Lloyd Austin, members of the Joint Chiefs of Staff, and combatant commanders in the White House on April 20, 2022, in Washington, D.C. Photo: Win McNamee/Getty Images

11 May 2022 – The White House told The Intercept that it rejects the characterization of the war in Ukraine as a proxy war between the United States and Russia, an assertion recently advanced by Rep. Seth Moulton, D-Mass., during a Fox News appearance. “We’re not just at war to support the Ukrainians. We’re fundamentally at war, although somewhat through a proxy, with Russia, and it’s important that we win,” Moulton said.

Asked if the White House shared Moulton’s view of the nature of the conflict, White House spokesperson Andrew Bates was blunt: “No,” said Bates in a statement to The Intercept. “President Biden has been clear that U.S. forces are not and will not engage in a conflict with Russia. We are supporting the Ukrainian people as they defend their country, which is exactly what President Biden told Putin we would do if he invaded.”

The question of whether the U.S. is fundamentally at war against Russia through a proxy in Ukraine was raised as well by Defense Secretary Lloyd Austin, who was asked during a press conference what the U.S. considered a success in the war. He said that the goal was for “Ukraine [to] remain a sovereign country, a democratic country, able to protect its sovereign territory.” But, he added, “we want to see Russia weakened to the degree that it can’t do the kinds of things that it has done in invading Ukraine.” Press secretary Jen Psaki later walked back the comments, saying Austin was talking about the U.S. objective to prevent Russia from taking over Ukraine and countries beyond it.

On Monday, President Joe Biden said he was worried that Russian President Vladimir Putin has been left without a way out of the war. But whether Putin has a way out depends to some extent on whether the U.S. is determined to wage a proxy war against Russia or whether the U.S. decides to push toward a negotiated end to the conflict launched by Putin’s invasion of Ukraine.

According to Ukrainska Pravda, sourcing its report to those close to Ukrainian President Volodymyr Zelenskyy, British Prime Minister Boris Johnson told the Ukrainian leader that even if Ukraine wanted to sign a peace deal, the West remained committed to confronting Russia. Biden’s own statements calling the war a genocide and for Putin to be tried for war crimes could also foreclose an easy exit.

When asked about the White House’s response, Moulton said, “Whatever you want to call it, this is a new type of conflict and it is bigger than just Ukraine,” and pointed to his op-ed for Fox News. “However this ends,” he writes, “we cannot make the mistake – again – of believing that Putin will stop here. We’re witnessing the first days of a new world order.”

The U.S. media and political class have been sending increasingly escalatory messages toward Russia in recent days. Moulton’s “fundamentally at war” comments followed a New York Times article in which government officials claimed credit for intelligence sharing that led to the killing of multiple Russian generals. That was followed the next day by a Washington Post article similarly claiming credit for the sinking of the Russian flagship Moskva. The Biden White House responded by saying that it was disturbed at the links and found them counterproductive. Which direction the heat travels, up or down, could determine whether we all end up dead and the planet left a nuclear wasteland.

Biden has been urging Congress for a quick infusion of $33 billion to fund Ukraine’s not-a-proxy war, agreeing to separate the package legislatively from Covid-19 relief so that the needs of the American people don’t slow down the war effort.

This isn’t the first clash that Moulton has had with Biden. Last year, Moulton called the withdrawal from Afghanistan a “disaster” — and the Biden administration heavily criticized Moulton for secretly freelancing his way into Afghanistan to survey the situation. “It’s as moronic as it is selfish,” an anonymous senior administration official told the Washington Post. “They’re taking seats away from Americans and at-risk Afghans — while putting our diplomats and service members at greater risk — so they can have a moment in front of the cameras.”