16 Jun 2022 – Vandana Shiva, president of Navdanya International, visited Italy in early June 2022 to present her latest book, From Greed to Care (Dall’avidità alla cura – Emi). The tour started in Naples and continued through Rome and Florence to Turin. In particular, the Indian activist was the guest  of the Berlingueriana event in Naples, of the Capital’s administration   and the Italian Buddhist Union (UBI) in Rome, and in Turin of Cinemambiente.

We met her to talk about the global situation, rising inequalities and the worrying obesity figures released by the World Health Organisation (WHO). Global issues which have immediate repercussions on the local. This is the case with the war in Ukraine and the wheat crisis, but, Vandana Shiva warns, we must be very careful to avoid financial speculation on food. The Indian activist also dwells on the attempt to propose GMOs as a solution to the alleged food crisis and the organic law just approved by the Italian government. 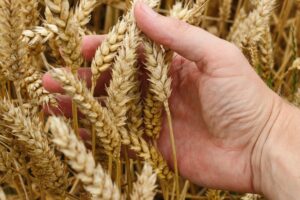 Does the title of your latest book express a wish or is something moving in this direction? How strong is the influence of multinationals on our lives?

The book is about both a growing trend of life-threatening emergencies and my vision of the better world we can create by abandoning greed as the driving force behind the economy, society and our relationship with nature. We can create this world by making caring for the earth and each other the guiding value. The influence of multinational corporations on our lives has grown over the last thirty years of neo-liberal globalisation. But people have resisted. The attempt to privatise and commodify movements was stopped by the struggle for water democracy in India and Italy. Navdanya and the Seed Freedom movement have resisted the patent system and the corporate monopoly on seeds. Corporations now want to control everything: our bodies, our minds, our food, our health. If we don’t resist, they will own nature and all its life-support systems. Which means they will take over our lives.

The number of billionaires in the world is increasing, as is the number of people living in poverty. A single individual like Bill Gates, with all his investments, has more power than many countries of the world. Is it possible to reverse this trend and the pattern that generates these inequalities?

Everything that has been made by men can be unmade by men. The rise of billionaire rulers like Gates is a repetition of the rule of robber barons like Rockefeller in the US a century ago. Billionaires break social rules and undermine democratic governance to expand their empires. That is why I wrote Oneness vs. the 1% – Shattering Illusions, Seeding Freedom (Chelsea Green Publishing). As Navdanya International, we published a citizens’ report on the Bill and Melinda Gates Foundation. Reversing the trend is not only possible, but necessary if humanity wants to have freedom and a future. Citizens must become aware of the illegitimate power of corporations over our governments and our lives. We must use all the possibilities in our societies and countries to roll back corporate power, as was done in the US in the 1930s when the Rockefellers’ monopoly on oil through Standard Oil was dismantled. And we must create new possibilities to channel the power of the people through mobilising, organising, researching and nurturing alternatives free from corporate control, as we did with seeds, food and agriculture.

The world is shocked by the war in Ukraine. The food crisis, in particular the wheat crisis, has been indicated as a natural consequence of the war. Yet many are claiming that financial speculation is also behind the crisis. What is your position?

Every crisis in history was used by the wheat monopolies to increase their profits and control. The riots over bread in the Arab world, referred to as the ‘Arab Spring’, were the result of rising wheat and bread prices due to financial speculation. Food has been turned into a commodity, a financial asset. During the 2008 crisis, as Kaufman wrote in The Food Bubble: “Imaginary wheat bought anywhere affects real wheat bought everywhere”.

With around the clock electronic trading triggered by the algorithms of composite price indices and commodity derivatives, finances have grown along with the growth of hunger, as the Agribusiness Accountability Initiative has been pointing out since April 2008.

Financial growth and money growth generated by the finance casino do not lead to real growth in the processes that support and sustain life. Deregulation has destabilised the global financial and food system. It created asset management funds like Blackrock and Vanguard. Index management funds can multiply finances, not food.

The general impression is that there are some political parties, supported by the industry lobby, that are trying to take advantage of the war. For example, several are pushing for the deregulation of new GMOs in Europe as a solution to the food crisis. Does this equation really work?

Any disaster has been used as an opportunity by the GMO lobby, which represents the same conglomerate that also sells toxic agrochemicals. They tried to use the Haiti earthquake disaster to impose GMOs. The farmers there created a movement and resisted. When the super cyclone devastated Orissa in 1999, there was an attempt to impose GM maize and soya. We organised and our Ministry of Health banned GMOs. European citizens must rise up and defend their freedom to eat GM-free food, their right to biosafety. They must call the bluff of governments trying to use the war in Ukraine to dump untested and unregulated GMOs on European citizens.

There is an international consensus on the need to create an alternative to industrial agriculture and the large-scale distribution model. Italy has just passed a law for organic farming. Can agroecology contribute to the protection of biodiversity and the well-being of farmers and citizens?

From my 35 years of work in agroecology and biodiversity conservation on the Navdanya farm, I have developed the conviction that chemical-free agriculture, such as agroecology, is necessary to conserve and regenerate biodiversity and, through biodiversity, the wellbeing of farmers and citizens. Pesticides and insecticides are driving insects to extinction, herbicides such as RoundUp/ Glyphosate are driving plants, insects, and the soil organisms that depend on them, to extinction. The destruction of biodiversity in soil and plants is leading to the destruction of biodiversity in our gut microbiome, which is at the root of the increase in chronic diseases. Agroecology based on biodiversity produces more food when measured in terms of nutrition per acre and not in terms of yield per acre. Farmers’ net incomes are higher when they cultivate biodiversity for local food economies, instead of chemical-intensive monoculture products for global supply chains. Biodiversity, chemical-free and local food benefit farmers, citizens and the Earth.