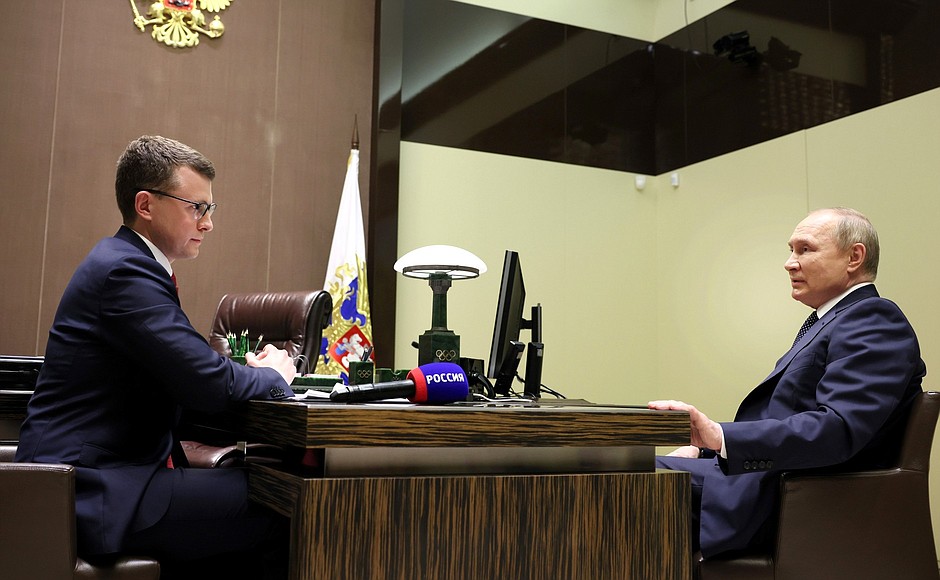 This extensive interview on the global as well as European resource crisis provides more than statement of Russia’s perspective. It also frames issues structurally that need to be addressed in every capital and policy arena. Its factual detail should be checked for validity, of course, and the assignment of responsibility carefully considered. It should be noted that several of those details will come as a surprise to those who rely on Western MSM for their information. (For example, it was Ukraine that mined the waters off Odessa – not Russia as claimed by a headline story in yesterday’s NYT which is wholly fallacious). However we judge the actions of Russia, and others, I see no advantage in having a political elite – including those in power – who wear their ignorance as some sort of insignia of rank. — Prof. Michael Brenner

Pavel Zarubin: Mr President, we have just followed your meeting with the head of Senegal who is also the current leader of the African Union. He expressed, and actually in the past week many countries have expressed concern not so much about the food crisis, but they are afraid of large-scale famine because world food prices are climbing and so are oil and gas prices, These issues are interrelated.

Naturally, the West blames Russia for this, too. What is the real situation at this point, how is it developing? And what do you think will happen in the food and energy markets?

President of Russia Vladimir Putin: Yes, indeed, we are seeing attempts to place the responsibility on Russia for developments in the global food market and the growing problems there. I must say that this is another attempt to pin the blame on someone else. But why?

First, the situation with the global food market did not become worse yesterday or even with the launch of Russia’s special military operation in Donbass, in Ukraine.

The situation took a downturn in February 2020 during the efforts to counter the coronavirus pandemic when the global economy was down and had to be revived.

The financial and economic authorities in the United States, of all things, found nothing better than to allocate large amounts of money to support the population and certain businesses and economic sectors.

We generally did almost the same thing, but I assure you that we were much more accurate, and the results are obvious: we did this selectively and got the desired results without affecting macroeconomic indicators, including excessive inflation growth.

The situation was quite different in the United States. The money supply in the United States grew by 5.9 trillion in less than two years, from February 2020 to the end of 2021 – unprecedented productivity of the money printing machines. The total cash supply grew by 38.6 percent.

Apparently, the US financial authorities believed the dollar was a global currency, and it would spread, as usual, as it did in previous years, would dissolve in the global economy, and the United States would not even feel it. But that did not happen, not this time. As a matter of fact, decent people – and there are such people in the United States – the Secretary of the Treasury recently said they had made a mistake. So, it was a mistake made by the US financial and economic authorities – it has nothing to do with Russia’s actions in Ukraine, it is totally unrelated.

And that was the first step – and a big one – towards the current unfavourable food market situation, because, in the first place, food prices immediately went up, they grew. This is the first reason.

The second reason was European countries’ short-sighted policies, and above all, the European Commission’s policy in regard to energy. We see what is going on there. Personally, I believe that many political players in the United States and Europe have been taking advantage of people’s natural concerns about the climate, climate change, and they began to promote this green agenda, including in the energy sector.

It all seems fine, except for the unqualified and groundless recommendations about what needs to be done in the energy sector. The capabilities of alternative types of energy are overestimated: solar, wind, any other types, hydrogen power – those are good prospects for the future, probably, but today, they cannot be produced in the required amount, with the required quality and at acceptable prices. And at the same time, they began to belittle the importance of conventional types of energy, including, and above all, hydrocarbons.

What was the result of this? Banks stopped issuing loans because they were under pressure. Insurance companies stopped insuring deals. Local authorities stopped allocating plots of land for expanding production and reduced the construction of special transport, including pipelines.

All this led to a shortage of investment in the world energy sector and price hikes as a result. The wind was not as strong as expected during the past year, winter dragged on, and prices instantly soared.

On top of all that, the Europeans did not listen to our persistent requests to preserve long-term contracts for the delivery of natural gas to European countries. They started to wind them down. Many are still valid, but they started winding them down. This had a negative effect on the European energy market: the prices went up. Russia has absolutely nothing to do with this.

But as soon as gas prices started going up, fertiliser prices followed suit because gas is used to produce some of these fertilisers. Everything is interconnected. As soon as fertiliser prices started growing, many businesses, including those in European countries, became unprofitable and started shutting down altogether. The amount of fertiliser in the world market took a dive, and prices soared dramatically, much to the surprise of many European politicians.

However, we warned them about this, and this is not linked to Russia’s military operation in Donbass in any way. This has nothing to do with it.

But when we launched our operation, our so-called European and American partners started taking steps that aggravated the situation in both the food sector and fertiliser production.

The crop yield depends on the quantity of fertiliser put into the soil. As soon as it became clear that our fertilisers would not be in the world market, prices instantly soared on both fertilisers and food products because if there are no fertilisers, it is impossible to produce the required amount of agricultural products.

One thing leads to another, and Russia has nothing to do with it. Our partners made a host of mistakes themselves, and now they are looking for someone to blame. Of course, Russia is the most suitable candidate in this respect.

Pavel Zarubin: Incidentally, it has just been reported that the wife of the head of our largest fertiliser companies has been included in the new European package of sanctions. What will all this lead to in your opinion?

Vladimir Putin: This will make a bad situation worse.

The British and later the Americans – Anglo-Saxons – imposed sanctions on our fertilisers. Then, having realised what was happening, the Americans lifted their sanctions, but the Europeans did not. They are telling me themselves during contacts: yes, we must think about it, we must do something about it, but today they have just aggravated this situation.

This will make the situation in the world fertiliser market worse, and hence the crop prospects will be much more modest, and prices will keep going up – that is it. This is an absolutely myopic, erroneous, I would say, simply stupid policy that leads to a deadlock.

Pavel Zarubin: But Russia is accused by high-ranking officials of preventing the grain that is actually there, in Ukrainian ports, from leaving.

Vladimir Putin: They are bluffing, and I will explain why.

As for shipping out Ukrainian grain, we are not preventing this. There are several ways to export grain.

The first one. You can ship it out via the Ukraine-controlled ports, primarily in the Black Sea – Odessa and nearby ports. We did not mine the approaches to the port – Ukraine did this.

I have already said to all our colleagues many times – let them demine the ports and let the vessels loaded with grain leave. We will guarantee their peaceful passage to international waters without any problems. There are no problems at all. Go ahead.

They must clear the mines and raise the ships they sunk on purpose in the Black Sea to make it difficult to enter the ports to the south of Ukraine. We are ready to do this; we will not use the demining process to initiate an attack from the sea. I have already said this. This is the first point.

The second. There is another opportunity: the ports in the Sea of Azov – Berdyansk and Mariupol – are under our control, and we are ready to ensure a problem-free exit from these ports, including for exported Ukrainian grain. Go ahead, please.

We are already working on the demining process. We are completing this work – at one time, Ukrainian troops laid three layers of mines. This process is coming to an end. We will create the necessary logistics. This is not a problem; we will do this. This is the second point.

The third. It is possible to move grain from Ukraine via the Danube and through Romania.

Fourth. It is also possible through Hungary.

And fifth, it is also possible to do this via Poland. Yes, there are some technical problems because the tracks are of different gauges and the wheel bogies must be changed. But this only takes a few hours, that is all.

Finally, the easiest way is to transport grain via Belarus. This is the easiest and the cheapest way because from there it can be instantly shipped to the Baltic ports and further on to any place in the world.

But they would have to lift the sanctions from Belarus. This is not our problem though. At any rate, President of Belarus Alexander Lukashenko puts it like this: if someone wants to resolve the problem of exporting Ukrainian grain, if this problem exists at all, please use the simplest way – through Belarus. No one will stop you.

So, the problem of shipping grain out of Ukraine does not really exist.

Pavel Zarubin: How would the logistics work to ship it from the ports under our control? What would the conditions be?

They are welcome. We will provide peaceful passage, guarantee safe approaches to these ports, and ensure the safe entry of foreign ships and passage through the Sea of Azov and the Black Sea in any direction.

By the way, several ships are stuck in Ukrainian ports at this point. These are foreign ships, dozens of them. They are simply locked up and their crews are still being held hostage.